Integration Via Affordable Housing: Similarities and Differences Between Amsterdam and the San Francisco Bay Area (Part 2)

Week two in Amsterdam proved as compelling as week one and included interviews with affordable housing developers, the City of Amsterdam Director of Housing, the City of Amsterdam Director of Services, and an affordable housing bike tour. From a physical workplace perspective I am struck by the similarity in every office I have been to date: each has a big, open, colorful and pleasant room, with a variety of tables and chairs from which to choose to congregate, and a coffee machine that provides good, free coffee any time of day. The spaces are so pleasant and varied I may create a new coffee table book called “workplaces in Amsterdam.”

My experience in Amsterdam continues to highlight the similarities and differences in affordable housing deal structures and the process for developing affordable housing in the Netherlands versus the San Francisco Bay Area.The Netherlands is going through tremendous change right now in its delivery of affordable housing, services, and the funding streams for both. Their housing program for people with special needs is also in transition with a new mandate by the Federal government to house refugees.

Most notably, beginning in 2015, the City mandated that 30% of all affordable units that become available through attrition be reserved for people with special needs (including people who are homeless and/or people with mental illnesses, substance use disabilities, developmental disabilities, domestic violence survivors, former prostitutes, and most recently, refugees). This totals about 6,000 units annually. The ability to prioritize special needs and medically fragile households is doable because all units made available through attrition by the non-profit housing developers are distributed by a central reservation agency operated by the City of Amsterdam. The remaining 70% of households on the centralized waitlist typically needs to wait 9-12 years for a unit.

In contrast, the vast majority of units that become available in the San Francisco Bay Area are filled by site-based waitlists. While efforts are underway for a centralized waitlist for homeless people in some Bay Area counties, a person looking for affordable housing has to get on every single waitlist possible to maximize their chances for a unit.

In the Netherlands, to qualify for a special needs unit (and thus receive a unit faster) there is an obligation that the tenant must receive services, at least for a period. Further, services are tied to the person, not the unit. In this way, if service needs diminish, so does the cost.

In contrast, in the San Francisco Bay Area, services must be optional for tenants in permanent supportive housing. Service delivery is in general tied to the building. If a tenant were to move out, their case manager would likely change. 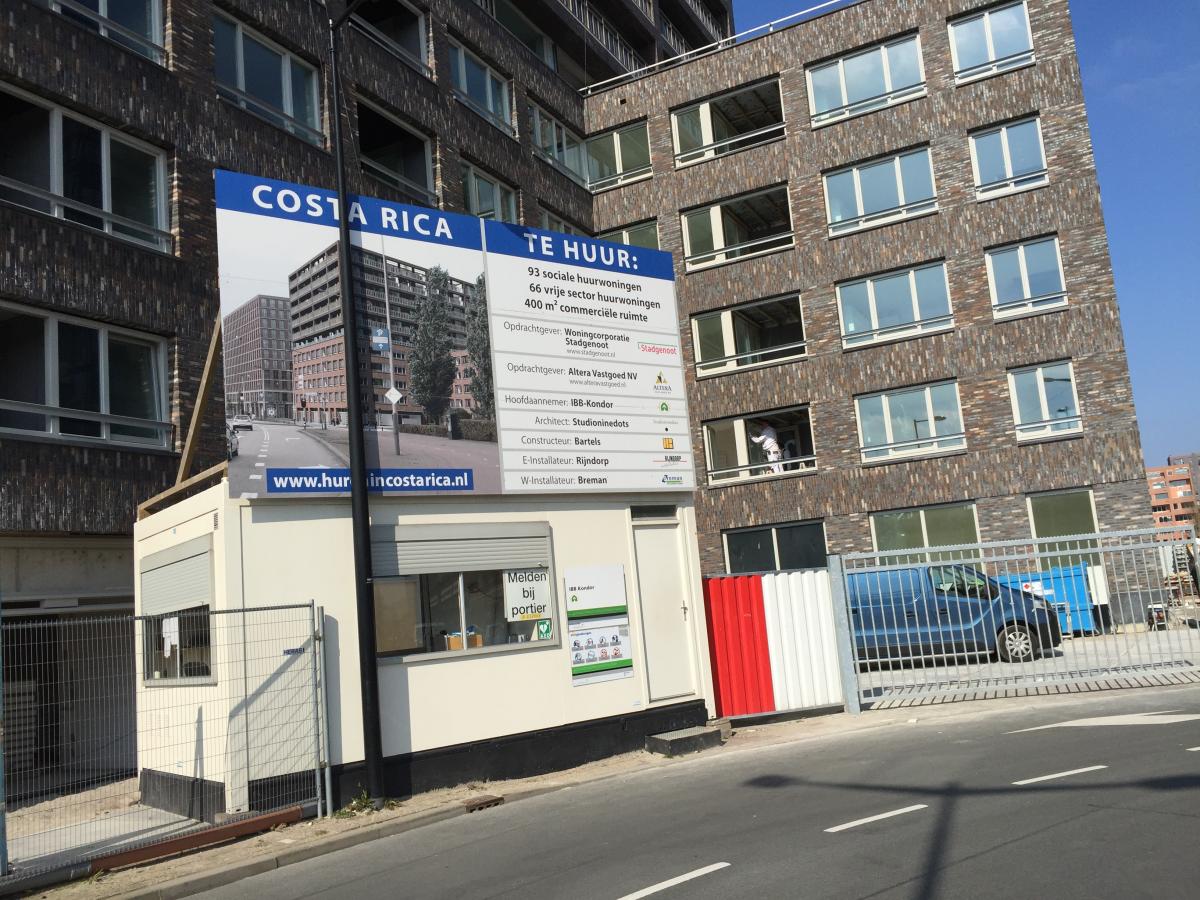 Mixed-Income Project Under Construction in Amsterdam

Further, the actual development of affordable housing in the Amsterdam is remarkably simple from a financing perspective. Capital funds are available to the non-profit developers via their own assets (the source of these assets is fascinating but is not the focus of this blog post) and bank loans. Rent and a maintenance fee that typically totals 1-2 month’s rent spread out over 12 months cover operating funds. Any income-qualifying tenant that needs a subsidy can get one through the Federal government. Anybody that needs services will receive them and the insurance company or the City pays the cost. A non-profit housing developer in Amsterdam today would expect to lose $4 million out of a $50 million investment over a 50-year period. This cost is underwritten by the non-profit developer. The key element that makes this system doable is that the non-profit developer is able to use its assets portfolio wide, which affords enormous flexibility.

In contrast, underwriting SF Bay Area Affordable housing is extremely complicated. In general, each property is a separate asset entity corporation and is structured to be completely independent from the parent company’s other buildings. Typically, each project has numerous capital development sources, each with their own underwriting requirements. Operating costs are very high. Operating or rent subsidies are very hard to obtain. Services funding is determined on a project-by-project basis. 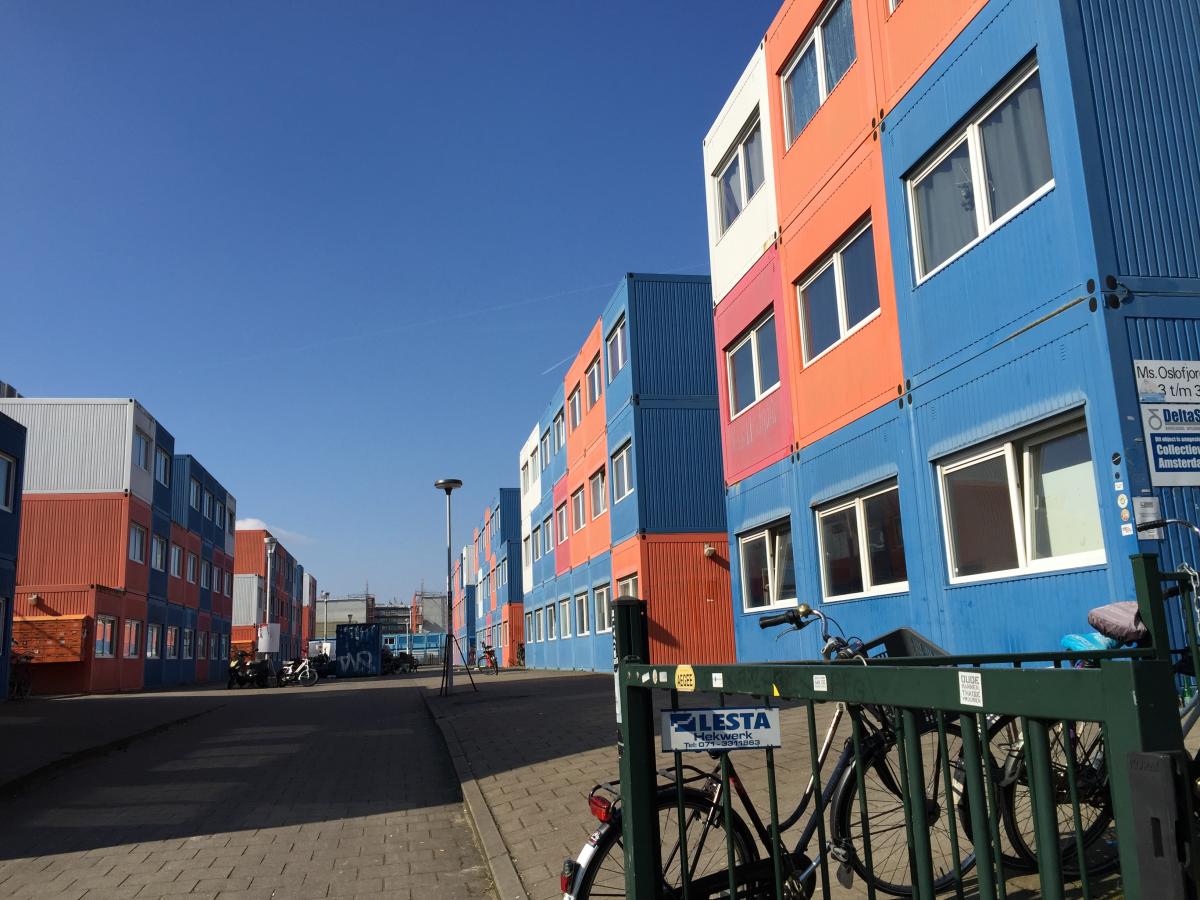 Both the San Francisco Bay Area and the City of Amsterdam suffer from a housing supply gap and expensive construction costs. In addition to the 30% of units portfolio-wide to be made available to special needs households through attrition, there is a mandate to provide 1,000 new units by the end of 2018 in Amsterdam. To help meet this need, new container communities are under development. Interestingly, while the ratio of special needs to a general population is considered optimal at 30%-70%, the refugees are believed to be programmatically successful and integrated at higher percentage. For example, the new container neighborhood currently under development, Riekerhaven, is being designed to house refugees and students with a 50-50% split. If the containers were reserved for special needs and a generally lower income population only, the ratio would be 30-70%.

Both the San Francisco Bay Area and the City of Amsterdam rely on political leadership and recognize that the general population is a key stakeholder. NIMBYism, sadly, is something both cities share.

While significant process and policy differences remain between the San Francisco Bay Area and Amsterdam, the fundamental program for affordable units and special needs units remains the same. Over the next few months, and with my forthcoming research in Denmark in June, I hope to be able to bring some of the policy efficiencies I have seen in Amsterdam back to my projects with the intent of facilitating policy changes back in the San Francisco Bay Area.

Natalie Bonnewit, principal with Bonnewit Development Services and specializing in affordable and supportive housing development, is studying how affordable housing development can include services for marginalized populations as a 2015-2016 Urban and Regional Policy Fellow. She will travel to Amsterdam and Copenhagen and apply her fellowship experience to her work with numerous governments, developers, service providers, and healthcare companies throughout the San Francisco Bay Area. This is the second of several blog posts from Natalie.