The India Trilateral Forum brought together policymakers, academics, members of the business community, civil society, and intellectuals to discuss some of the most pressing issues facing India, the European Union and the United States. Over the course of the two-day conference, panels addressed challenges to the liberal global order, evolving global alliances, regional security issues, and economic growth and trade development hurdles. To see more about what happened at the India Trilateral Forum this year check out #ITF13, @orfonline, and @GMFUS on Twitter.

Liberal democratic principles are threatened throughout the world, with populist regimes on the rise and traditional protectors of the “westernized” world order like the United States changing its approach toward human rights, democracy, and civil liberties. European nations, like Sweden and Germany, are being thrust into the forefront of the battle to protect liberalism, with the principles of free speech, religious tolerance, and a commitment to protecting human dignity serving as key pillars for European democracies.

The European Union’s identity, its purpose, and its relevance are under severe scrutiny today, with the ongoing migrant problem, continued Russian pressure and aggression in the region, democratic backsliding in Hungary and Poland, and the ever-growing internal security threat of rising radicalization exposing cracks in the EU’s foundation. Participants sought to determine whether the EU is willing and able to take a leading role in an international world order where the United States is, rhetorically at least, willing to take a step back, leaving significant gaps in leadership from the west.

Is a Liberal Democracy Sustainable in India?

Democracy has been in steady decline globally for years. Traditional liberal values and principles are under attack and eroding in the United States and Europe. The spread of populist governments, the rise of illiberal democracies and their success at sustaining support is causing more and more policymakers and academics to question whether liberal democracy continues to be a sustainable model for nations seeking economic development.

It is fitting that the start of the 13th India Trilateral Forum began with a discussion on the politics of India under Modi and what the Bharatiya Janata Party’s ascent means both on a domestic and international level. The discussion raised Indian, European, and American perspectives, discussing what was at stake for India’s future as a country and as an international partner and ally.

It became clear that India is not at risk of losing its standing internationally, both because of the economic costs as well as the strategic geopolitical situation making a relationship with India not only desirable, but necessary for both Europe and the United States. As was aptly noted during the conversation, “the U.S.–India relationship picked up because of shared strategic interests, not because of shared democratic values.” 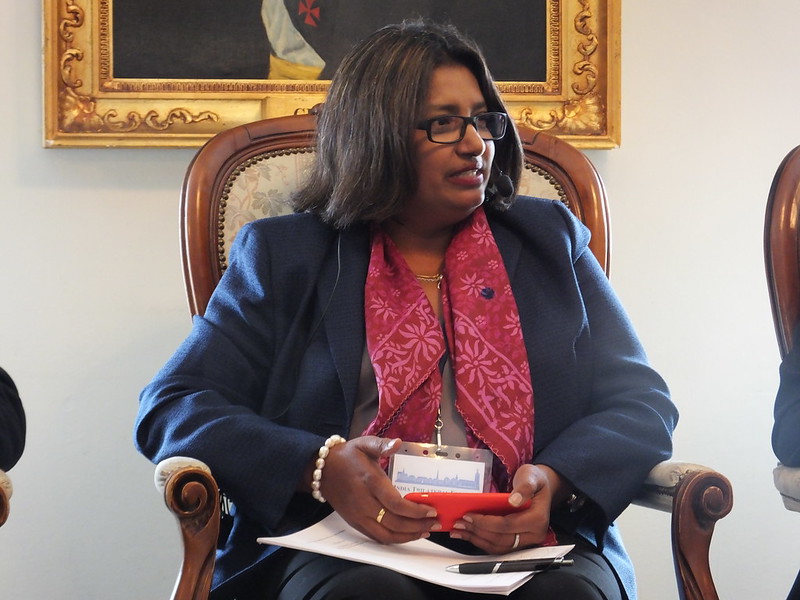