Foreign Policy Views in the Heart of Europe Are not Monolithic

The countries of the Visegrád Group—the Czech Republic, Hungary, Poland, and Slovakia—were once united in their attempt to join the European Union and NATO. After they had done so by 2004 the group somewhat faded from view, but it gained new visibility after 2015 for its resolute opposition to measures put forward by the EU institutions. The four countries are often perceived by outsiders as a cohesive, unified, often Eurosceptic actor. However, the Trends of Visegrád Foreign Policy 2019 survey shows that, though some of their preferences overlap, views in the Visegrád Group are not monolithic when it comes to most areas of foreign policy, even if some politicians in the region wish otherwise.

The survey of the perceptions of foreign-policy stakeholders, decision-makers, and influencers in the four states confirms that the clashes between the EU institutions and the Visegrád Group (especially Hungary and Poland) in the past few years have not altered the almost unanimous impression among these stakeholders that membership in the union is beneficial. In fact, fifteen years after their countries’ accession, the majority expect that the EU will become even more important for their countries in the near future. This view is underscored by these countries’ economic ties within the single market and their deep connectedness to the German economy in particular.

"Though some of their preferences overlap, views in the Visegrád Group are not monolithic when it comes to most areas of foreign policy. "

In the survey, Germany tops the list of most important partners for all the Visegrád countries. The perception of the quality of relations with it has also improved somewhat since the previous survey in 2017 as the conflict over the refugee crisis faded. However, the middling perception of Germany among Polish stakeholders—at 2.7 on a scale ranging from 1 (very good) to 5 (very bad)—reflects the souring of relations since the Law and Justice party came to power in 2015. By comparison the score for the other three countries are 1.3 for Slovakia, 1.5 for the Czech Republic, and 2.2 for Hungary.

In all four countries, large majorities of respondents see the United States as one of their country’s most important partners. This is particularly the case among Polish stakeholders, 98 percent of whom see the United States as being among the country’s five most important partners and for whom the quality of relations was rated higher than by their peers from the other three countries. Hungarian respondents had a clearly worse estimation of the relationship with the United States, which can be explained by the deterioration of ties during the Barack Obama administration and an only partial recovery since.

The issues stakeholders expect to dominate the foreign policy agenda of the Visegrád countries—such as climate change, migration and asylum, or energy—largely align with what is foreseen to form the EU agenda. Instability in the eastern and southern neighborhoods is predicted by the majority to receive more attention in all four countries, and especially in Poland and Slovakia according to about three-quarters of respondents from both countries. However, despite the expected increase of threats and instability in the EU’s vicinity, less than half of the respondents think that the EU should engage in either neighborhoods through military missions. Slovak respondents express the lowest support for this as 20 percent. Between 68 and 79 percent of Visegrád stakeholders expect common foreign and security policy to gain more importance on the EU’s agenda in the next five years, but humanitarian and civilian tasks are the roles that they prefer for the EU. There is also limited support for the EU to accept refugees, with the exception of Poland where 52 percent of the respondents are in favor.

The expectation among the majority of respondents in the Visegrád countries is that security and defense will become more important in transatlantic cooperation. They also expect relations with the United States to remain as good as they are today (Slovakia and the Czech Republic) or to improve (Poland and Hungary) in this sector. However, they have much more modest expectations regarding the improvement of EU-U.S. security cooperation. In all four countries, a majority of respondents also expect NATO to become more important in the next five years. 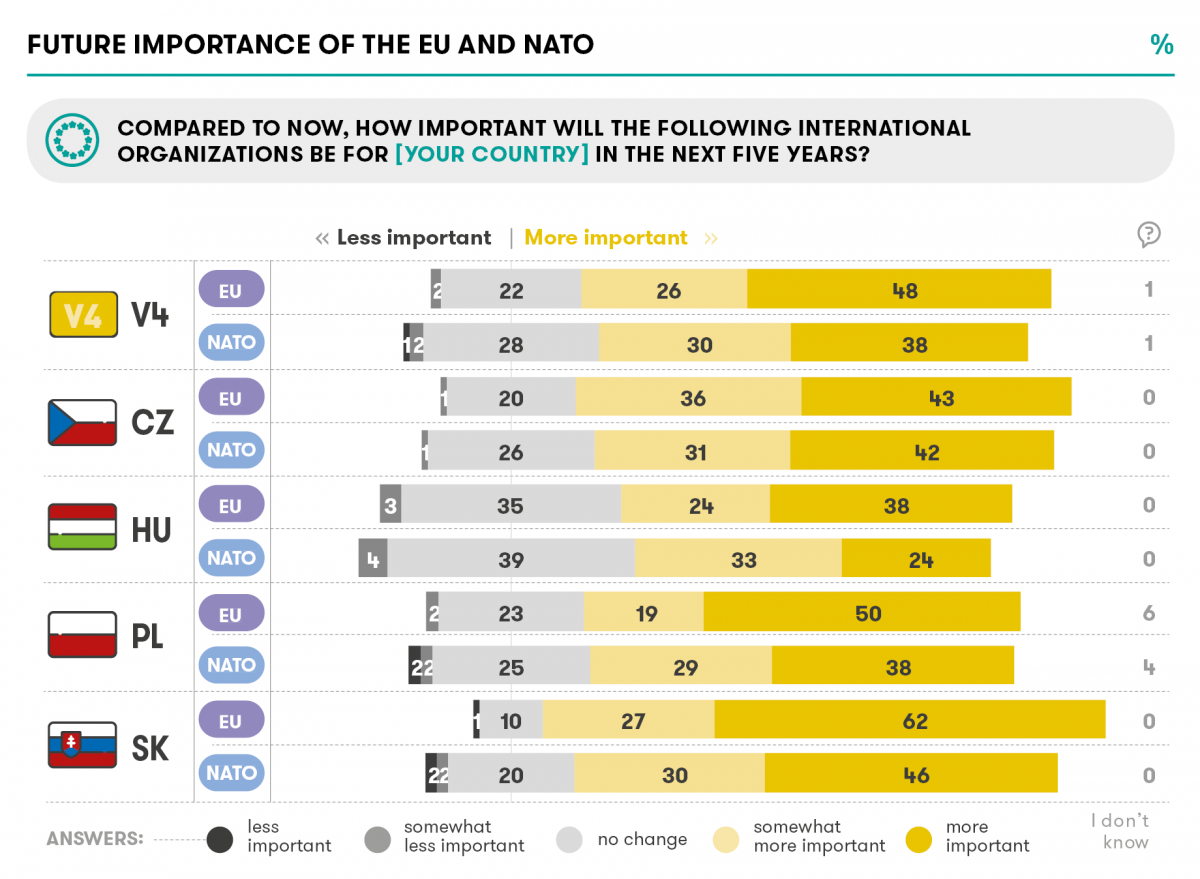 While the Visegrád countries are rather closely aligned when it comes to transatlantic relations, they show more differences with regard to Russia and China. Only among Hungarian stakeholders is Russia regarded among the five most important partners for the country’s foreign policy; for the other three countries relations with Russia are judged to be between neutral and bad. What is more, only among Hungarian respondents are relations with Russia perceived to be better than relations with Germany and the United States. However, their views on how the EU should deal with Russia are similar to those of their Visegrád counterparts; for example, the appetite for abandoning sanctions is low.

"While the Visegrád countries are rather closely aligned when it comes to transatlantic relations, they show more differences with regard to Russia and China."

Views of China are similar. Though the official positions of all four countries suggest that China is important as a source of investment and a rising trade partner, none of the stakeholder communities placed China among their country’s top five partners. Relations with China are perceived as neutral in all countries but Hungary, where they are evaluated as good, which overall aligns with the dominant view held in the four foreign-policy communities that Beijing could not only pose a threat to the EU, but also to the given countries, and that trade liberalization with China is better avoided. It seems, therefore, that stakeholders are more worried about closer economic ties than their country’s governments—especially in the case of Poland and Hungary—which frame China’s growing interest in the EU as an opportunity and actively engage in the Beijing-led 17+1 format.

All in all, despite the Eurosceptic and negative image the Visegrád Group has gained in the EU in recent years, the foreign policy communities of the four countries are united in their pro-European and pro-Western orientation, and they perceive EU and NATO membership as beneficial. Their views concerning the future EU and national foreign-policy priorities are also similar. Their evaluation of their countries’ bilateral relations with key international partners, however, reveals important differences among Visegrád Group foreign policies. Based on their responses, Poland’s pro-U.S. orientation is stronger than that in the other three countries, while Hungary is leaning more toward Russia and China. Even if Hungarian stakeholders’ preferences regarding relations toward these countries do not differ much from that of their Visegrád counterparts, the “eastern opening” to Russia and China that Hungary’s government has adopted in recent years, and which is confirmed by the survey, holds the potential to further divide Visegrád governments on foreign policy issues.

The Trends of Visegrád Foreign Policy survey (trendy.amo.cz) provides a snapshot of the thinking, perceptions, and expectations of foreign-policy stakeholders, decision-makers and influencers in the Czech Republic, Hungary, Poland, and Slovakia, and was conducted in August and September 2019. The project was conducted by the Association for International Affairs (AMO) in cooperation with the Konrad Adenauer Foundation, the Slovak Foreign Policy Association, and Visegrád/Insight.