The German Marshall Fund of the United States and the British Embassy in Paris held a roundtable discussion focusing on the new Russian strategic posture toward Europe and the steps transatlantic partners will need to take to continue to ensure proper deterrence. The event will be based around the paper “Drawing Red Lines in Gray Areas: Deterring Russia’s Challenge to Transatlantic Security Today” authored by Martin Michelot and Steven Keil.

Russian hybrid warfare doctrine, beginning with the conflict in Georgia revolves around the concept of “muddying the waters between war and peace,” creating a political vacuum in Russia’s near-abroad which is neither wholly in nor out of conflict. In this context, the Kremlin seeks to exert its influence and to destabilize Western leadership in the post-Soviet space.

Western “red lines” for Russian aggression must be made crystal clear, and transatlantic allies must demonstrably possess the military and political capabilities to back them up. The purpose of these red lines is to ensure that violating NATO territorial integrity does not become a “risk worth taking for Moscow.” These deterrent warnings must be loud and unambiguous to ensure they are not misread. NATO currently suffers primarily from slow follow-on forces. In the event of a crisis in the Baltic states, the NATO Response Force (NRF) would take weeks if not months to mobilize. The Russians, however, have used exercises to demonstrate that Moscow can move tens-of-thousands of troops to NATO’s border in a matter of days. This slow response time, coupled with Russian advances in electronic and cyber warfare, represent a concerning vulnerability on NATO’s Eastern Flank.

What capability gaps remain along NATO’s “red lines”? How can these gaps be (realistically) closed? How can NATO work to maintain escalatory control in the event of a crisis? How can a modernized nuclear posture, offensive cyber capabilities, and other doctrinal reforms bolster deterrence? The speakers will explore the different perceptions that exist from within the Alliance on these questions in the lead up to the next NATO Summit.

The discussion will be held in English and off-the-record. 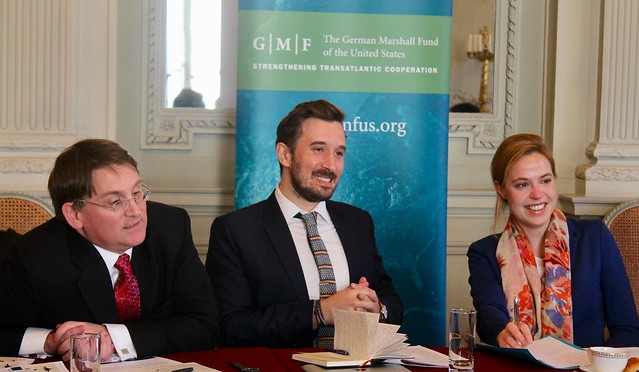