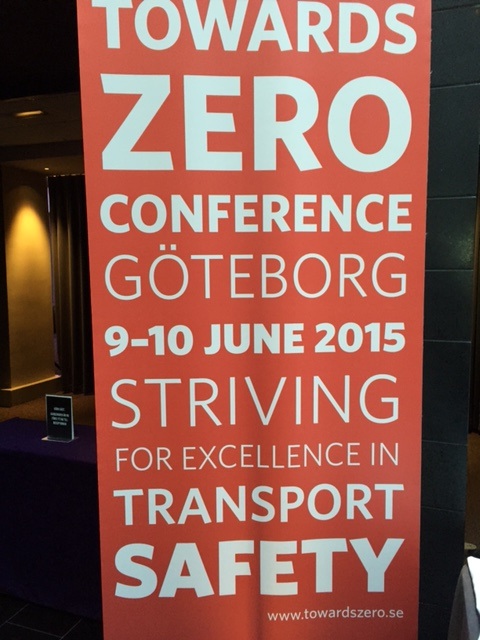 I was encouraged to hear these words repeated often during a recent international conference on Vision Zero. And, I was surprised — and encouraged — by how often they were paired with a concentrated focus on cities, walking, and bicycling.

Last week, I was thrilled to be among the more than 170 policymakers, practitioners, and advocates who gathered in Gothenburg, Sweden to discuss the importance of Vision Zero — past, present and future. While one-third of the participants hailed from the host country of Sweden, some traveled from as far away as Brazil, South Africa and Nepal — and at least 13 of us were from the United States.

One thing came into clear focus for me: In the nearly two decades since Sweden introduced Vision Zero, certain fundamentals about the concept remain (thankfully) constant, while other aspects are being reconsidered in light of new — or newly understood — realities. And for our nascent U.S. efforts toward Vision Zero, there’s plenty to learn and contribute to a movement that is growing and evolving worldwide.

First, the Swedes aren’t backing away from their commitment to “zero” and much of Europe is following their lead.

There was widespread acknowledgement that zero traffic fatalities and serious injuries is an ambitious goal — and unabashed commitment to zero as the only appropriate goal for traffic safety. Matts-Ake Belin of the Swedish Transport Administration put it simply: “Vision Zero is nothing less than an ethical imperative.” As the Swedish Transport Administration is working to create Sweden’s Vision Zero 2.0 approach, the European Commission seems to be moving toward the Vision Zero approach, as well, setting a goal of halving road casualties by 2020 and moving “close to zero fatalities” by 2050. Their efforts have already helped to reduce traffic deaths by 43% in Europe between 2001 and 2010. Speakers stressed that Vision Zero is more than an ethical goal to ensure safe mobility, though. It’s also a highly effective communication tactic and policy strategy, and a powerful tool to unify people behind shared goals.

“The strength of Vision Zero is that it gives such common goals for all stakeholders,” Anna Johansson, leader of Sweden’s Ministry of Enterprise and Innovation, said in her welcoming remarks. 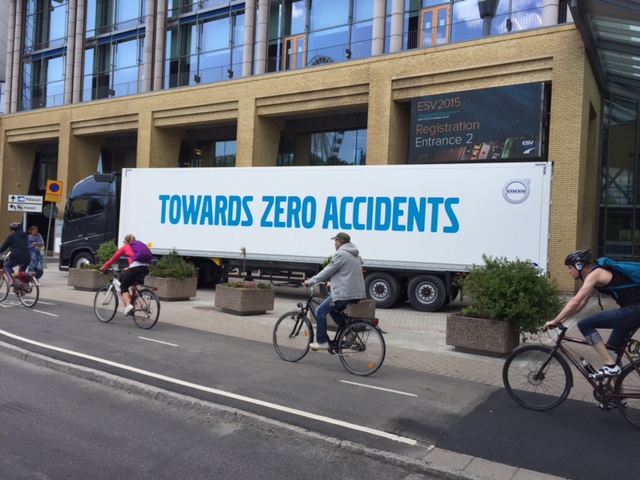 “This is a tool to get people working, to have a focus, and to create measures… and focus on getting the numbers down to the bottom,” added Torbjorn Suneson, the acting director-general of the Swedish Transport Administration. Sure, it’s provocative, explained Johan Strandroth, traffic safety analyst with the Swedish Transport Administration. But that helps in drawing attention to the issue and showing that “we’re not happy with a little bit of change. We need major shifts.” And, in encouraging news for American communities, this commitment to zero was shared publicly by the highest ranking U.S. representative at the conference. “Our goal is the only acceptable goal: Zero deaths,” Mark Rosekind, the Administrator of the U.S. National Highway Traffic Safety, told the crowd. “Not fewer, but zero.”

Many world leaders acknowledge that leadership – from policymakers, agency bureaucrats, community members and the private sector – will make the difference in realizing safe mobility. In contrast to  some conferences where you can drown in data and studies, the speakers focused on the practical need for stepped-up leadership and urgency at all levels. “Improved road safety is not rocket science, but it doesn’t happen by itself,” said Fotis Karamitsos, the director for mobility and transport for the European Commission. “It takes persistence and hard work.”

Etienne Krug, Director of the World Health Organization’s Department of Injuries and Violence Prevention, echoed that sentiment: “This is very much a man-made disaster. This is not some mysterious bug. It’s a question of political will and prioritizing the decision that we are going to attack this… More political will is needed. More action is needed.” 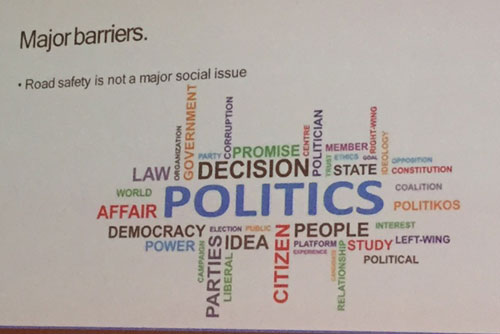 “It’s a question of political will,” said Etienne Krug

Polly Trottenberg — director of the New York City Department of Transportation and one of America’s Vision Zero leaders — shared some of the city’s advances and challenges under Vision Zero. Along with mayoral leadership, she commended strong community organizing by families of victims and advocates in helping to win major safety improvements in NYC, including lower speed limits and new cameras to ensure safer speeds. She cited the challenges too, noting that some parts of the criminal justice system have yet to catch up to the community’s prioritization for safe mobility.

A challenge area mentioned by nearly all of the speakers is preventing serious traffic injuries. While fatalities have received the lion’s share of attention and been reduced in many advanced nations, the same cannot be said about serious traffic-related injuries, many of which are debilitating physically, financially, and emotionally.

This disparity can be traced to several factors:

While progress is clear in countries like Sweden, the crisis in street safety is most acute in developing nations, triggering an ethical imperative to extend Vision Zero to urban centers across the globe. Krug reminded us that in just a single day, an average of 3,000 people worldwide die in traffic crashes, many of them young and 92% of them residing in low- and middle-income countries. “It is our moral duty to export [Vision Zero] and apply it to the rest of the world,” he said.

Claudia Adriazola-Steil, director of Road Safety at the World Resources Institute’s Center for Sustainable Cities, emphasized the urgency as she laid out expectations for massive urbanization across the globe. Another 2.5 billion people will live in cities by 2050 —  the equivalent of adding 290 Londons in just 35 years. And, if current trends continue, it could mean an additional 1 billion motor vehicles on the roads.

Fortunately, many speakers referenced another trend: the growing understanding that safe mobility plays a pivotal role in the overall livability and health of a city – including in already developed nations. The Swedes and the European Union plan to focus their future Vision Zero efforts more specifically on creating safer, more inviting conditions for walking and biking, which many cited as a prerequisite for a healthy, livable city. In fact, Sweden’s Vision Zero 2.0 calls for realigning attention from rural areas and drivers’ safety to cities and non-drivers. 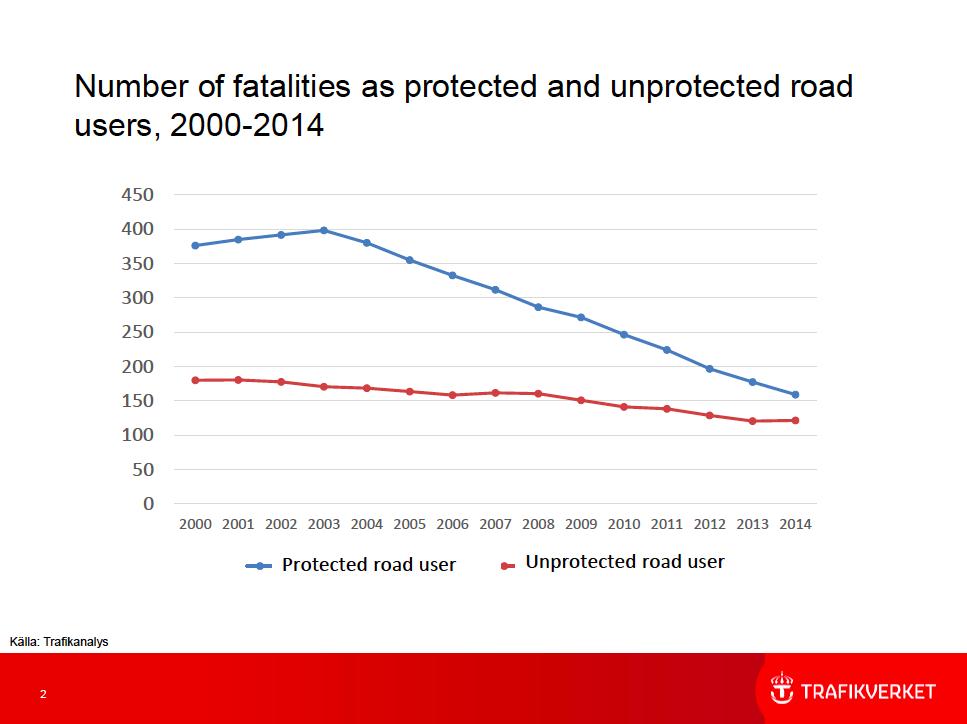 In Sweden, the decline in fatalities for auto occupants has outpaced the reduction for people walking & biking

“Everyone is thinking about it,” Strandroth, of the Swedish Transport Administration, said of this significant shift in focus. “What we haven’t seen yet is really innovative solutions to those problems.” Fotis Karamitsos, from the European Commission,  lamented that progress toward improving safety for people walking and biking is “below average” in Europe, citing “the mental silos that we have in our society” as one of the biggest barriers.

Removing siloed thinking and addressing active urban mobility is certainly a priority for a growing number of U.S. cities. So it was encouraging to hear Rosekind, from the U.S. National Highway Traffic Safety Administration, stress plans to “re-ignite focus on vulnerable users” in America, too.

Speeding up technology… to slow down

Many of the gains in nations like Sweden can be traced to a common denominator: technology. Technology has been pivotal in increasing  safety for people in cars, as well as travelers on highways and rural roads, thanks in large part to in-car technology and regulations. Meanwhile, people who walk and bike on  city streets have received less priority.

Thanks in large part to seat belts, air bags, and other in-car advancements and related regulations, fewer people are dying inside cars than outside of them in the EU. And as people replace their cars with the latest models, newer safety technology is expected to further improve those numbers (which is, of course, a good thing). But the same cannot be said for those road users outside of cars, which is a growing concern.

“We need to use technology to better protect vulnerable road users,” said Szabolc Schmidt, head of road safety at the European Commission. He wasn’t alone in that sentiment; it was repeated often at the conference, including by a representative from Volvo. 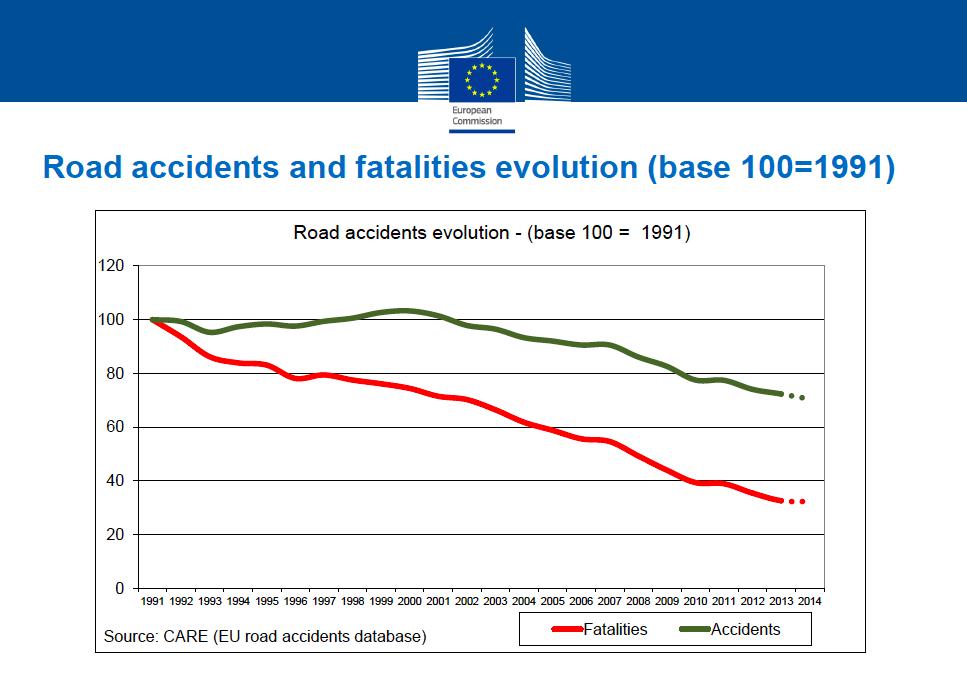 The decline in road fatalities in the EU

Meanwhile, just a short bike ride away from the Vision Zero conference, auto technology was the focus at the 24th International Technical Conference on the Enhanced Safety of Vehicles (ESV), which was sponsored, in part, by NHTSA and the U.S. Department of Transportation. Apparently NHTSA Administrator Rosekind repeated his call for Vision Zero in front of that international crowd. Hopefully, they took this message to heart.

I left the conference encouraged by the renewal of commitment to Vision Zero by such leaders as Sweden and the European Union, as well as the emphasis on improving safety in cities and among non-motorized transportation users.

“It’s a way of democratizing Vision Zero,” Strandroth, of the Swedish Transport Administration, said. “It’s not only about car passengers… but all people on the roads.”

This was apparent in the continued push to reach zero fatalities in our host city of Gothenburg, home to half a million residents. Just 10 years ago, Gothenburg  was among the cities with the  highest number of traffic collisions in Sweden. Now, it’s one of the safest in the country. Though they’ve already reduced traffic fatalities to fewer than 10 per year, they’re not content. Their goal is to halve that number at least every five years and to reduce traffic injuries from 300 to 75 in the next 10 years. And they have concrete ideas on how to do it. More on that soon.

Leah Shahum is the former executive director of the San Francisco Bicycle Coalition and is currently the executive director of the Vision Zero Network. She is currently traveling throughout Northern European cities to study their Vision Zero policy frameworks for reducing and ultimately eliminating traffic fatalities. This is the second of  several blog posts form Leah. This post was also cross-posted on the Vision Zero Network's blog.