From Amsterdam and the Ruhr, Industrial Reuse Examples to Inspire Detroit

The Ruhr region in Germany is an interesting case study for postindustrial areas in the United States. The region’s industrial decline began several decades ago, and due to a mix of political and economic factors, the cities of the Ruhr embarked on an economic development strategy that partly relied on the preservation and reuse of their industrial heritage. Because of this, there is now a range of sites—many still exemplifying some of the best international case studies of adaptive reuse—that are interesting to examine for lessons they can offer to U.S. cities.

This is one of the reasons why this region was the main focus of a recent study tour GMF hosted in October as part of the Detroit Opportunity Sites Initiative. The study tour sought to inspire Detroiters to consider some of the more innovative uses that are possible for the city’s 6.1 square miles of vacant industrial land and buildings. 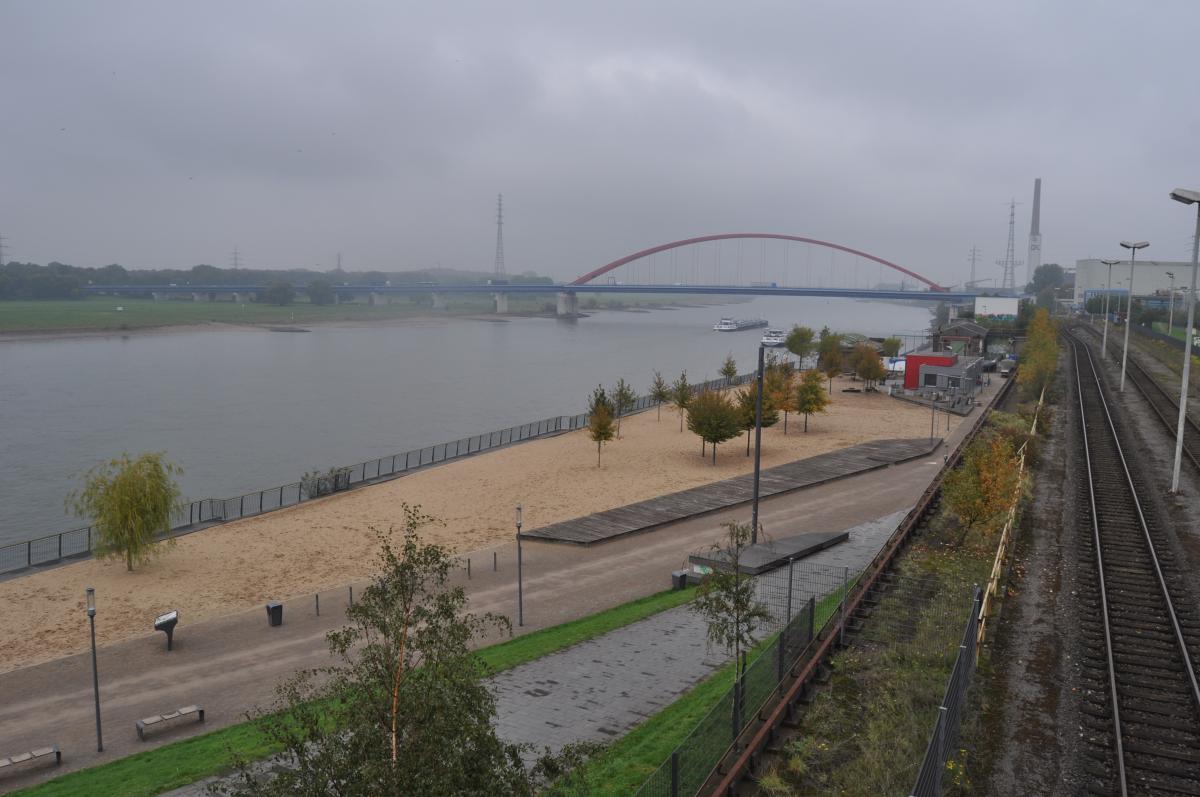 We saw a large variety of projects in the region, but none inspired the group as much as the Landscape Park in Duisburg. For many visitors, even a quick walk around the grounds is enough to show that a disused steel complex can be transformed to fulfill many potential needs.  The Landscape Park has a dizzying array of small and grand public spaces, large event venues, restaurants, climbing walls, and even a diving center, all showing off and putting to good use the unique industrial heritage and architecture of the site. Many of these other uses create an income stream that helps support the ongoing operations for the entire park. At the same time, the group saw that such a project was possible only because of remarkable institutional support and a collective sense that this site is and should continue to be part of the identity of the people of Duisburg and the Ruhr people at large. This made the overall price tag to initiate and complete the project a surmountable challenge. 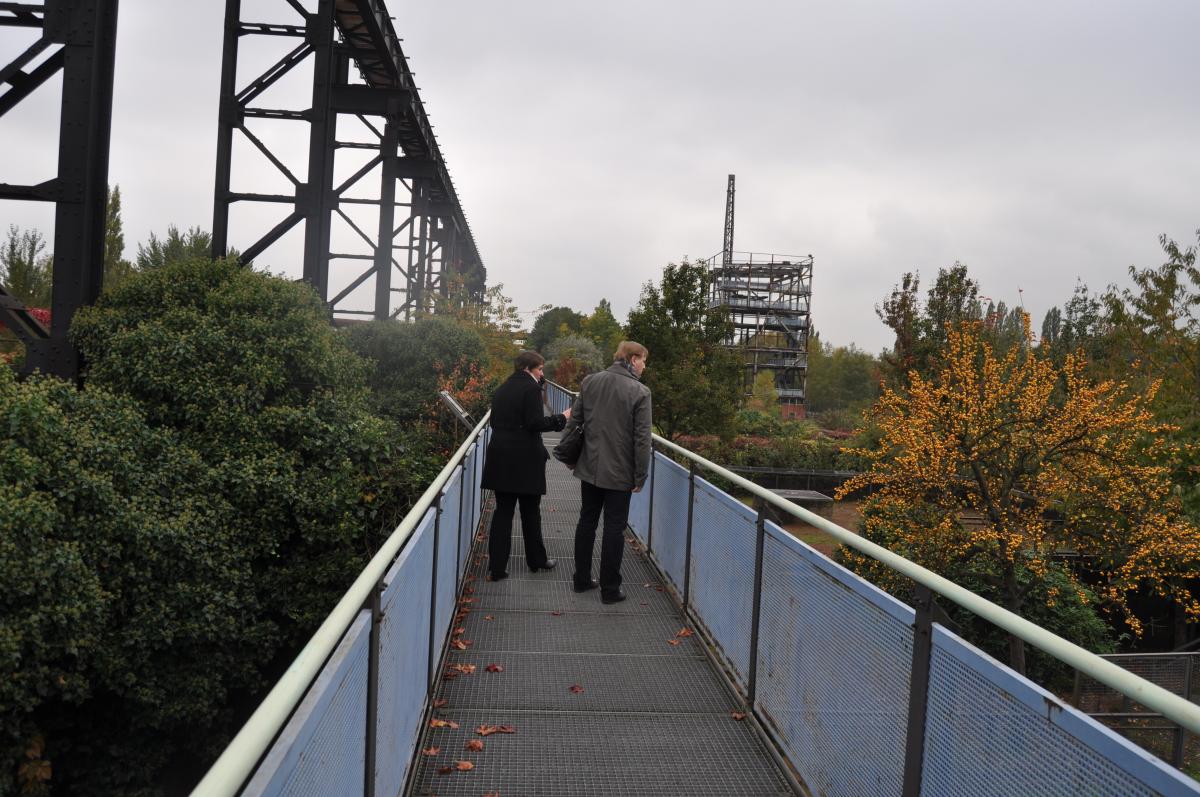 An Elevated Platform in the Landscape Park Duisburg

Another inspiration for the group was to see how many of the reuse projects were able to successfully turn industrial features into unique selling points for reuse projects. This was the case in Triple Z in Essen, where a complex of buildings once part of a mine structure is now perfect for the incubation of small enterprises.  Sometimes a reuse can be simple but effective.  In a new waterfront park called Rhinepark, a former industrial-sized wall was preserved to serve as an outlet for graffiti artists, a perfect backdrop to the otherwise minimally programmed park.

The group ended their tour of industrial land reuse in northern Amsterdam, a light industrial area with several examples of bottom-up projects that have put the area at the forefront of urban development. This visit served as a useful contrast to some of the larger projects in Germany, and also showed the group that even when public sector resources are tight, reuse could come from other sectors and civil society at large. This was the case in De Ceuvel, an office park made out of reused houseboats on a brownfield, and the NDSM Waterfront, a large former shipbuilding warehouse now transformed into a small city of artisans and entrepreneurs. 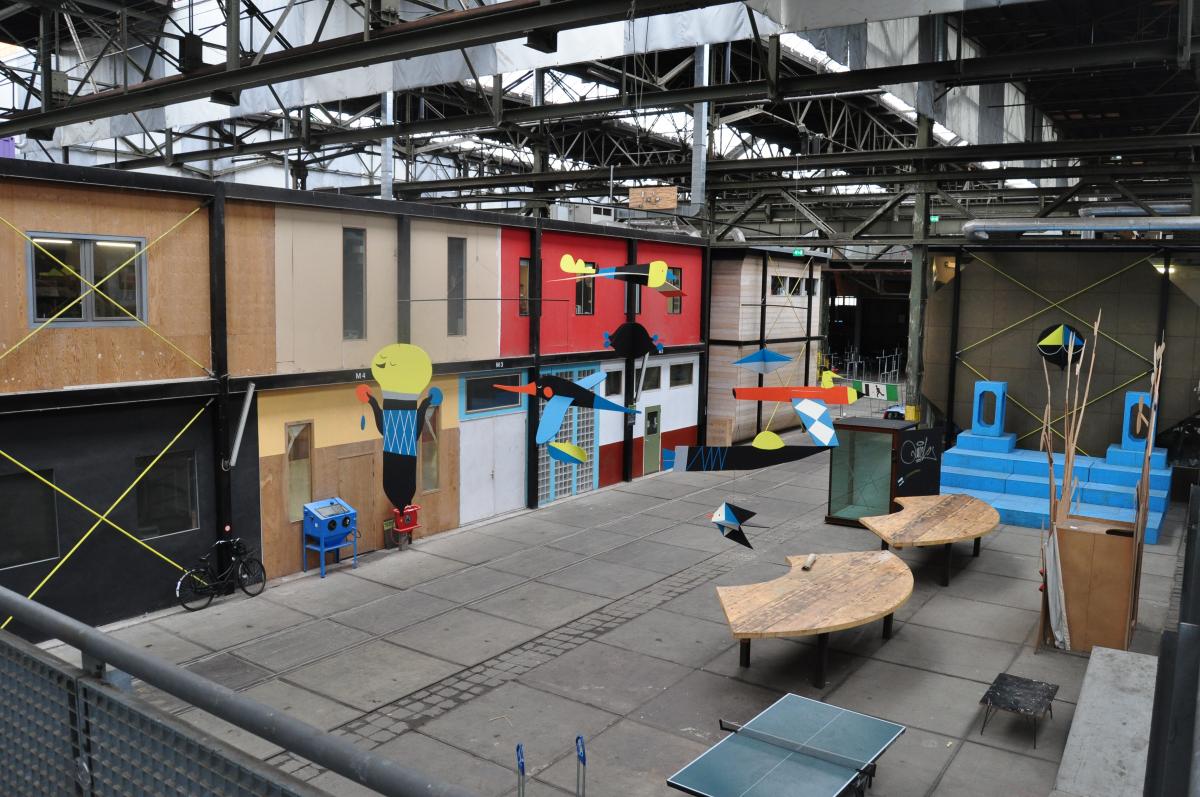 Inside the NDSM Waterfront in Amsterdam

Beyond the success stories, the group also heard about the long-term time scale of many of the projects, reflecting their complexity and resource requirements. These challenges mirror some of the local conditions in Detroit, particularly when it comes to available resources relative to the amount of industrial property waiting for reuse. As the group saw on the trip, however, these resources can sometimes come from unlikely places provided that a group of committed actors is on board. And when done right, the reuse of industrial sites could provide an unparalleled set of assets for Detroit and its citizens.