Montenegro to Walk Through NATO’s Open Door: Can More of the Balkans Follow?

WASHINGTON—At the 2012 NATO Summit in Chicago, then U.S. Secretary of State Hillary Clinton famously said, “I believe this should be the last summit that is not an enlargement summit.” She was to be immediately disappointed: the subsequent NATO summit in Cardiff passed without new members. Now, for the first time in seven years, a new country is being invited to become a member state. NATO’s proclaimed “open door policy” under Article 10 was reinforced this week with the invitation to Montenegro to join the Alliance. This is a significant moment for the pursuit of security and stability in the Balkans, and Europe more broadly as it confronts multiple challenges.

There has been a renewed focus on the Balkans recently, for good reasons. The goal of a Europe whole, free, and at peace is still not attained. And given the simultaneous crises in Ukraine (Russia’s breach of its sovereignty and territorial integrity by the annexation of Crimea and support for separatists in the Donbas) and the migration crisis, it is crucial that the process of Euroatlantic integration of the last core unintegrated geographic part of Europe — the Western Balkans — continues. 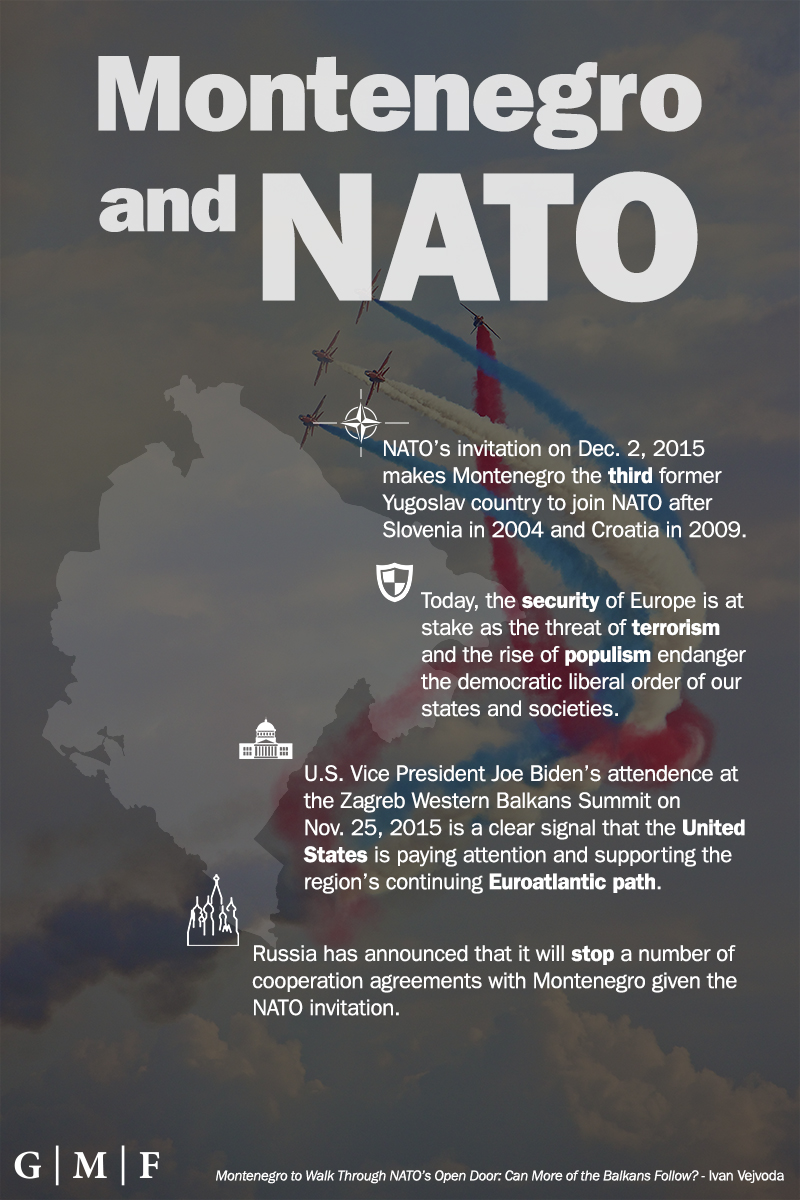 All the countries of the region aspire to join the European Union and NATO (except for Serbia to NATO). They are all at different stages of the accession process. These processes need to be accelerated, while still ensuring that the countries fulfill all the requisite conditions. The credibility of both NATO and the EU is at stake. But the security of Europe writ large is also at stake as the threat of terrorism and the rise of populism endanger the democratic liberal order of our states and societies.

NATO Secretary-General Jens Stoltenberg made several visits to the Balkans recently, demonstrating this renewal of focus and showing the importance NATO attaches to its security. He went to Montenegro to see that the necessary conditions for membership had been met. Montenegro is the third former Yugoslav country to join NATO after Slovenia in 2004 and Croatia in 2009. Macedonia, although fully eligible to join NATO, is prevented from doing so by the dispute over its name with Greece; every effort should be made to overcome this unacceptable situation for the sake of further stability in the region.

Stoltenberg also made an important two-day visit to Serbia on November 19 and 20, during which he declared there should be a fresh start in relations because of the “many common security challenges.” The former Federal Republic of Yugoslavia (composed of Serbia with Kosovo and Montenegro) was bombed by NATO in 1999. After initially aspiring to join NATO as a full member until 2004, Serbia shifted to a policy of neutrality while seeking the highest level of cooperation under NATO’s Partnership for Peace, with an Individual Partnership Action Plan agreed upon in January 2015. Stoltenberg’s visit marks a further important consolidation of the relationship.

The presence last week of U.S. Vice President Joe Biden at the Zagreb Bled-Brijuni Western Balkans Summit of Eight leaders is another clear signal that the United States is paying attention and supporting the region’s continuing Euroatlantic path. Biden said that the United States has “had an overwhelming interest in this region for the last 25 years.” The vice president has been the U.S. politician with perhaps the greatest interest and engagement in this region for the past quarter century, and his trip to the region confirms U.S. resolve in supporting both the EU accession process and NATO enlargement. It should be said that NATO troops continue to play an important peacekeeping role in Kosovo.

Finally, U.S. Secretary of State John Kerry arrived in Belgrade yesterday to attend the OSCE Ministerial meeting under Serbia’s presidency. There he met with the Serbian prime minister and dined with his Russian counterpart, Sergey Lavrov. Russia’s new assertiveness, coupled with the refugees crisis and concerns about global terror threats, have given all these visits a heightened relevance. Russia announced that it will stop a number of cooperation agreements with Montenegro given the NATO invitation. This represents an attempt by Moscow to support those in the region opposed to Euroatlantic integration. Russia speaks about NATO moving ever closer to its borders; with Montenegro’s membership, NATO is in fact moving away from Russia’s borders. It suffices to look at a map to see where the Western Balkans belongs.

That is why this renewed focus, first of the EU for the Western Balkans with the “Berlin Process” engaged by Chancellor Angela Merkel last year to enhance the enlargement process and now the renewed emphasis placed by the United States, are crucial for Europe’s stability and should be pursued even more vigorously. That is also why the EU-NATO relationship needs to be strengthened and enhanced in the future.