EU Opens Accession Talks with Serbia: And the Enlargement Goes On

WASHINGTON—The European Union this week opened EU accession talks with Serbia. Anchoring Serbia within the stringent process of acquiring membership by progressively applying the legal framework of the EU, known as the acquis communautaire, marks a key moment in further strengthening Europe and in proving that the EU’s soft power is still at work.

Size matters. Serbia is the biggest country in the Western Balkans. And although all six countries of the region matter, if the biggest one advances to membership, there will be further consolidation of stability and security, while enhancing the EU’s credibility as a peacemaker and inspiration of democratic reform. 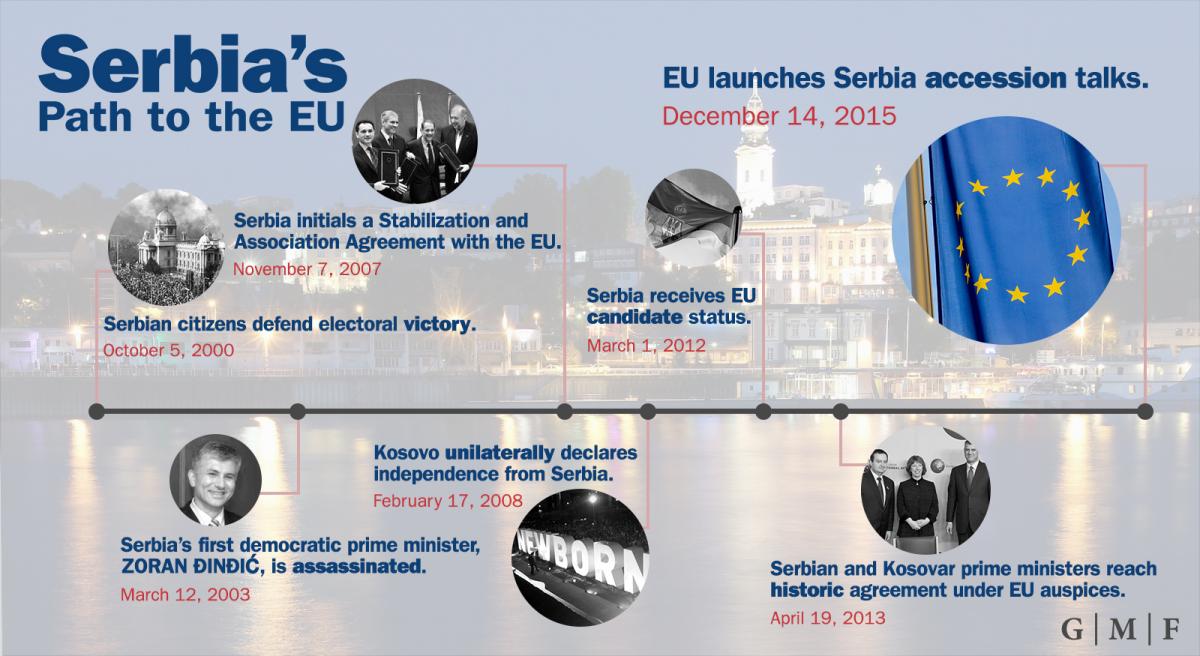 As the EU confronts the multiple challenges of migration, Russia’s assertiveness, and the eurozone travails, the continuing enlargement process is of the utmost importance.

The region is already completely surrounded by EU and NATO member states Hungary, Romania, Bulgaria, and Greece. Two republics of the former Yugoslavia, Slovenia and Croatia, are already members of the EU and NATO. The Western Balkans are the inner courtyard of the EU and NATO.

The path for membership of the Western Balkans was launched at the EU Thessaloniki Summit in June 2003. War-torn during the 1990s, the former Socialist Federal Republic of Yugoslavia was dismembered along the administrative border lines of the six republics. The fall of Slobodan Milošević’s regime through peaceful elections in 2000 led to the beginning of Serbia’s transition to democracy. Under the energetic leadership of its then Prime Minister Zoran Đinđić, Serbia began an accelerated modernization and democratization process whose goal was deep-seated democratic reforms and Euroatlantic integration.

Serbia had additional challenges to address when compared to other post-communist countries. The first was to sort itself out territorially. It had been the Federal Republic of Yugoslavia (Serbia, Kosovo, and Montenegro) since 1992, then in 2003 it became the State Union of Serbia and Montenegro, with Montenegro voting in a referendum in 2006 to become an independent country, making Serbia an independent country. Serbia’s Autonomous Province of Kosovo unilaterally declared independence in 2008 (unrecognized by Serbia and 5 EU member states, but recognized by 111 UN member states).

The second challenge was to fulfill its obligations to the International Criminal Tribunal of the Former Yugoslavia based in The Hague. It took Serbia more than ten years to meet this conditionality, by arresting and extraditing close to 50 indictees, of which the most prominent were Milošević in 2001 and the Bosnian Serb leaders Radovan Karadžić (2008) and Ratko Mladić (2011). This considerably slowed down Serbia’s advance toward EU membership, since there was no serious advancement until these conditions were met.

The assassination of Đinđić in March 2003 was a further blow to the fledgling democracy, slowing its advance but not altering the path to EU membership. All governments since 2000 in one way or another have contributed to this goal.

Pundits have often raised the question of Serbia’s commitment to its pro-European orientation. There is no doubt where Serbia wants to go and where it will end up. All opinion polls over the years have shown clear majorities or pluralities of public opinion favorable to EU membership. The EU’s attraction as a peace project and economic power of half-a-billion citizens and 28 member states, where many Serbs have relatives and family members, is a significant incentive. People know that, notwithstanding the EU’s current challenges, being a member state means having somewhat more societal and individual certainty, predictability, security, and prosperity than staying outside of the gates.

The first chapter to be opened and the last one that will be closed is chapter 35. It pertains to the process of normalization of relations between Serbia and Kosovo. The EU has played a cardinal role in the normalization process between Belgrade and Pristina, who both share the goals of EU membership, overcoming the past, and achieving a better future. The EU has contributed significantly to this process through its two successive high representatives for foreign and security policy, Catherine Ashton until 2014 and now Federica Mogherini.

The EU has learned from two experiences that it adamantly does not wish to repeat. The first is taking in countries that are not yet ready (the case of Romania and Bulgaria in 2007) and that have not met all the requisite criteria. Thus, the process is much more rigorous than was already the case with Croatia’s accession. The second is taking in a country with unresolved territorial issues (the case of Cyprus in 2004). This is why chapter 35, devoted to the normalization of relations with Kosovo, is defined as it is.

The EU and Serbia have both shown this week that they are willing to engage in a process that, in a time of crisis and multiple challenges, will contribute to consolidating Europe’s peace, security, and stability. Reaching this goal is worth wrestling with the thorny issues that will come up.