Transatlantic 2015 – The Year in Review

At the start of 2015, the Kremlin looked to be the biggest concern for the transatlantic partners. But the terrorist attacks on the Charlie Hebdo offices in Paris in January quickly changed that calculation. The even deadlier attacks also inspired by the self-proclaimed Islamic State group (ISIS) in Paris and San Bernadino, California, toward years’ end ensured that terrorism and the threat of ISIS and terrorism overtook Russia as the dominant transatlantic security concern of 2015.

But the transatlantic story of the year was the refugee crisis — although in fact it was a crisis that the United States left Europe to deal with largely on its own. As the number of refugees reaching Europe climbed dramatically, and climbed again, Europe found itself confronting its worst refugee crisis since World War II. It was a story full of human tragedy, but also hope, and of logistical and political struggles — revealing rifts within Europe and between communities on both sides of the Atlantic.

Though the fallout of the ongoing violence in Syria — both the refugee crisis and threat of ISIS — defined the year, the other big transatlantic stories of the year — both wins and losses — were diplomatic.

Iran Nuclear Deal concluded: After more than a decade of negotiations, on July 14 the United States, France, Russia, China, the United Kingdom, and Germany signed a historic agreement with Iran insuring the exclusively peaceful nature of the Iranian nuclear program. The Joint Comprehensive Plan of Action reaches far beyond non-proliferation by renewing U.S.-Iran bilateral relations and preparing a path toward possible normalization.

COP21: On December 12, after more than 20 years of efforts in the fight against climate change, 195 nations agreed to a legally binding framework to cut down greenhouse gas emissions in an effort to limit the rise in global average temperature to “well below” a 2C increase from the pre-industrial era, with the ambition to try to limit it to an increase of 1.5C. It marks a milestone in international cooperation in addressing the challenges of climate change.

Russia: U.S. and European policymakers remained united in responding to Russia’s aggression on Europe’s eastern borders. While the approach itself was debated, Russia’s determined destabilization of eastern Ukraine failed to create overt fissures between transatlantic policymakers. Spearheaded by Berlin, transatlantic consensus kept pressure on Moscow and diplomatic efforts compartmentalized Russia’s move in Syria, detaching it from other strategic theaters. The EU renewed sanctions throughout the year, demonstrating a commitment to counter Russia’s aggression in Ukraine beyond the projections of many pundits and to the dismay of the Kremlin.

Montenegro and the Open Door: After seven years and multiple summits since the last round of enlargement, NATO reaffirmed its open-door policy on December 2 by inviting Montenegro to begin accession talks to join the Alliance. Montenegro’s invitation comes at a critical juncture. As multiple crises consume European and transatlantic differences on policy responses complicate decision-making, Montenegro’s invitation breathes new life into what some saw as increasingly reluctant Alliance policy. The move stands defiantly in the face of an aggressive Russian posture that sees the deepening of euroatlantic and European ties with Eastern European nations as a provocation and clearly rejects any “Russian veto” on NATO enlargement policy.

Public split over the Asia Infrastructure Investment Bank (AIIB): The transatlantic debacle of the year was the public division over the AIIB. While Washington viewed China’s initiative as competition, or perhaps even a threat to the existing liberal order, many European governments chose to see it optimistically, or perhaps practically, or at least decided it would be better to be on the inside. Instead of discussing their assessments and coordinating their responses, the partners publicly split as the United States restated its concerns and supported a boycott, and the U.K. rushed to be the first Western state to sign up, quickly followed by other European states.

TTIP going nowhere fast: The big economic transatlantic initiative, the Transatlantic Trade and Investment Partnership, saw precious little negotiation progress this year, while public distrust and protests gained momentum, especially in some European countries. According to U.S. Trade Representative Michael Frohman’s timelines, TTIP would be a loss for 2015, since he originally said it should be concluded by the end of the year. The new target, the end of the Obama administration, looks almost as fanciful at this point. But, in the end, it is not a loss yet. As this year’s Iran success shows, slow does not always mean dead.

Greece drama, to be continued: Despite turmoil and suffering in Greece (including 21 days of closed banks), and disagreement between Washington and Berlin over terms, Greece received another financial aid package and did not have to abandon the euro. But the 2015 deal was only a Band-Aid; Greece’s fate remains tenuous.

Minsk II held-ish: The Minsk II agreement signed on February 12 was supposed to reestablish a cease-fire and institute a number of peace-making measures. However, there was not a real cease-fire, nor significant process toward lasting peace. That said, after some flair-ups, the fighting did diminish and the situation seemed to be improving toward year’s end. Minsk II has sort of held, and may have a better year in 2016.

Safe Harbor: In an October 6 ruling, the Court of Justice of the European Union invalidated the EU-U.S. Safe Harbor agreement under which personal data could be freely transferred from EU member states to companies in the United States that signed up voluntarily to the principles of the framework. Triggered by growing concerns in Europe over the transfer of personal data to the United States, the case illustrates current transatlantic frictions on digital issues. A new Safe Harbor framework is being negotiated (2.0), with a set deadline for the European Commission of the end of January 2016. If they cannot agree, this will fall clearly into the loss category.

QUOTE OF THE YEAR

—Jean-Claude Juncker, president of the European Commission, State of the Union before the European Parliament

PICTURE OF THE YEAR

The picture of year was undoubtedly the photo of the three-year-old Syrian refugee Aylan Kurdi lying dead in the surf of a Turkish beach after drowning (with his mother and at least 12 others) en route to Greece. But another iconic photo for the year powerfully captures the refugee drama and the year of newly hardened borders within Europe. Many countries quickly erected barbed-wire fences, and many Schengan countries reinstated border controls. Here migrants are stuck between riot police and other migrants, trying to cross from Greece into Macedonia. 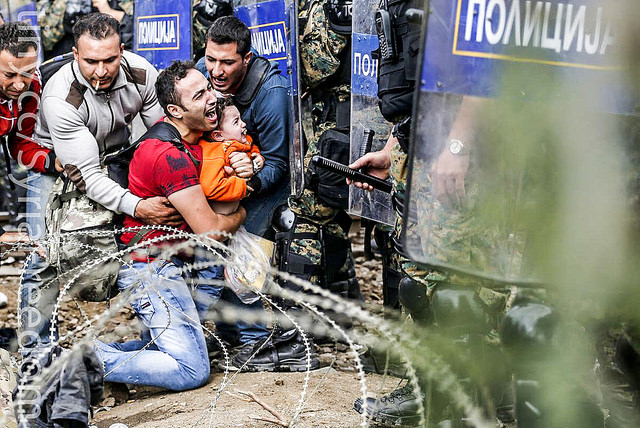