Responses to the Refugee Crisis in Lübeck, Germany

The MMF fellows travel to five European countries in 21 days. We worry about our 23-kg luggage-weight limit, where we will do laundry, and whether we have wifi to post on Facebook or stay in touch with loved ones at home. We are greeted by cheerful hosts upon arrival and move freely about the continent. We are fed heartily, and sleep in the most comfortable of beds. We give no thought to the availability of toilets and showers. And after our European tour, we will be on our way back home.

Syrian refugee Mahmoud and his family crossed five European countries in 17 days before arriving at their destination, Germany. They started with the treacherous boat journey from Turkey to Greece, after Mahmoud’s mother insisted that the family leave Syria so that her three high-school and college-age children can have a proper future uninterrupted by war and terror. Along their European journey, they slept next to garbage, if they slept at all; they were arrested in the forest and detained; at times they made their way by memory (of the GPS map) when their phone ran low on battery.  Until Austria they had only the clothes on their backs. They do not know when, if ever, they will be able to return home.

The MMF fellows’ paths cross that of Mahmoud’s family near Lübeck, Germany. 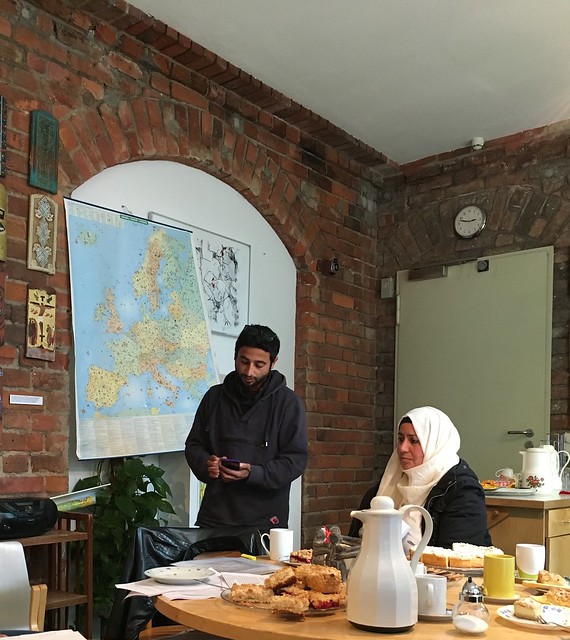 To cope with the stream of refugees Germany has vowed to accept—roughly one million expected this year—each state government must accept refugees according to its capacity. Lübeck, a city within the state of Schleswig-Holstein, and with a population of roughly 200,000, expects to resettle over 3,000 refugees by the end of 2015. Being a northern town, the city also sees a number of refugees who are traveling through to destinations yet farther north, such as Sweden.

This photo essay provides a snapshot of the German response to the refugee crisis, as reflected mainly in two refugee centers near Lübeck, Germany—one an official camp run by the German Red Cross and another a volunteer-run transit center for refugees simply passing through to other countries. While Germans do not speak with one voice on whether or not to welcome refugees, and although the conditions of refugee camps vary greatly across Germany, this portrait reflects the efforts of those who have embraced the motto “refugees welcome.” It also reflects the efforts of refugees like Mahmoud’s family to achieve normalcy in their new lives, and their strong wish to be seen and treated as individuals, with dignity and respect.

We were lucky to cross paths with Mahmoud’s family, with Red Cross workers, volunteers giving their time and energy to help refugees, and high-school students reflecting on how they can help. Open, personal interaction (“getting proximate,” in the words of Bryan Stevenson) transforms all those who engage. We were transformed.

Sandhya Gupta, Of Counsel at The Chandra Law Firm, LLC in Cleveland, Ohio, is a Fall 2015 American Marshall Memorial Fellow.