In the suitcase I’ve packed for the Marshall Memorial Fellowship I not only have clothes and gifts for the people I plan to meet, but also some pictures taken in the last few years. Memories of the refugee camps that have grown in many Arab countries where I have been working and covering the crisis, and, more recently, of the immigrant reception centers built by European governments:  “car parks” of humanity, evidence that we are facing the worst crisis of forced displacement of people since World War II.

A particularly European problem, but it is not just that. It as an American problem too. One that ultimately affects us all. And a critical revision of the history of the United States could help us see and avoid the brutalities of the past and repeating them in the present. Indeed,visiting the Chicago DuSable Museum, an institution developed to preserve and interpret the experiences and achievements of people of African descent, on the same day that the first migrants were deported from Greece to Turkey, it was almost impossible not to make a comparison between the picture of these immigrants and the African slaves shipped by similar ships.  Some might protest that a comparison between the importation of slaves to the new world centuries ago, and the situation of refugees in camps across Europe, is neither accurate nor fair.  But when viewing photographs from the two periods side-by-side, the similarities between the abominable living conditions seem unavoidably apparent.  In order to avoid allowing human suffering on such large scales to occur again in our times , it is time that we all, Americans and Europeans, take steps to restore our relationship with the people and countries now consumed by conflict, and help  host those who have fled it. 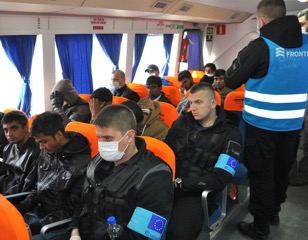 The first step involves truly understanding what is going on:  first and foremost by recognizing that the crisis in not temporary, but needs a long term solution.  Both the U.S. and Europe now have a chance to act smarter, think bigger, and move faster to  address the crisis and prevent the next one from occurring. While the Office of the United Nations High Commissioner for Refugees is trying to do some profound humanitarian work, the international community could be doing much more, particularly through developmental assistance and trade deals.  Ask refugees what are they looking for, and in the majority of the cases they will say family and jobs.  They willtell you that at home they were shopkeepers, teachers, doctors and so forth. And they want to do these things again. Or maybe try new things— if they can have access to education. A long term investment is needed. For them and for us all, as well as for our countries and economies. We have to gather international force and transatlantic coalitions to solve this global crisis for which we are all, as human beings, responsible.

Seven decades ago, Europe was destroyed by wars. Thanks to transatlantic relations trade and development began to revive places where institutions were broken and hope had been lost. A lot has been accomplished in the intervening years. Even if European security has been recently threatened by terrorism and violence and the Old World is facing populist challenges, Europe is still in the position to engage transatlantic partners to overcome the most urgent refugee crisis in modern times. 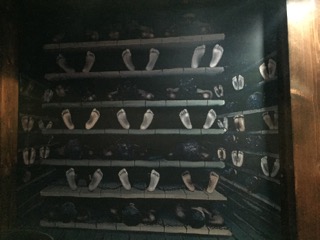 In the camps – in the official ones as well as those in the urban centers where migrants are waiting to know their future – there is still hope.  But the camps are incubating other feelings too.   The hopeful, as many have observed, are  getting impatient.

We should be, too.

Azzurra Meringolo, a journalist from Italy, is a Spring 2016 European Marshall Memorial Fellow.