This is not an ordinary election year, in part as isolationist voices have shown rhetorical strength. As a nonpartisan thought leader, GMF is closely observing the campaigns and working to elevate the transatlantic relationship for the new administration. Key for GMF is that the 2016 elections result in a solid commitment to the U.S.-European partnership, guided by democratic and inclusive values. Our economies account together for about half the world’s GDP and nearly a third of world trade, and we are fully invested in each other’s industries. We address global challenges and ensure security together. We need Europe at the top of the U.S. foreign policy agenda, and to achieve this we also must ensure that rising diverse young generations connect to the transatlantic story, and can join the opportunity to work together 'across the pond'.

In this light, GMF’s Transatlantic Leadership Initiatives and Congressional Affairs teams in Cleveland and Philadelphia partnered with GMF stakeholders including Congressional members and diverse rising leaders for a two part conversation adjacent to the national political conventions. Joining other nonpartisan actors hosting events in both convention cities, GMF leveraged these high profile occasions to strengthen still further our transatlantic bond. Through this effort, we were able to illuminate the importance of the transatlantic relationship at a significant time in America's domestic election cycle. 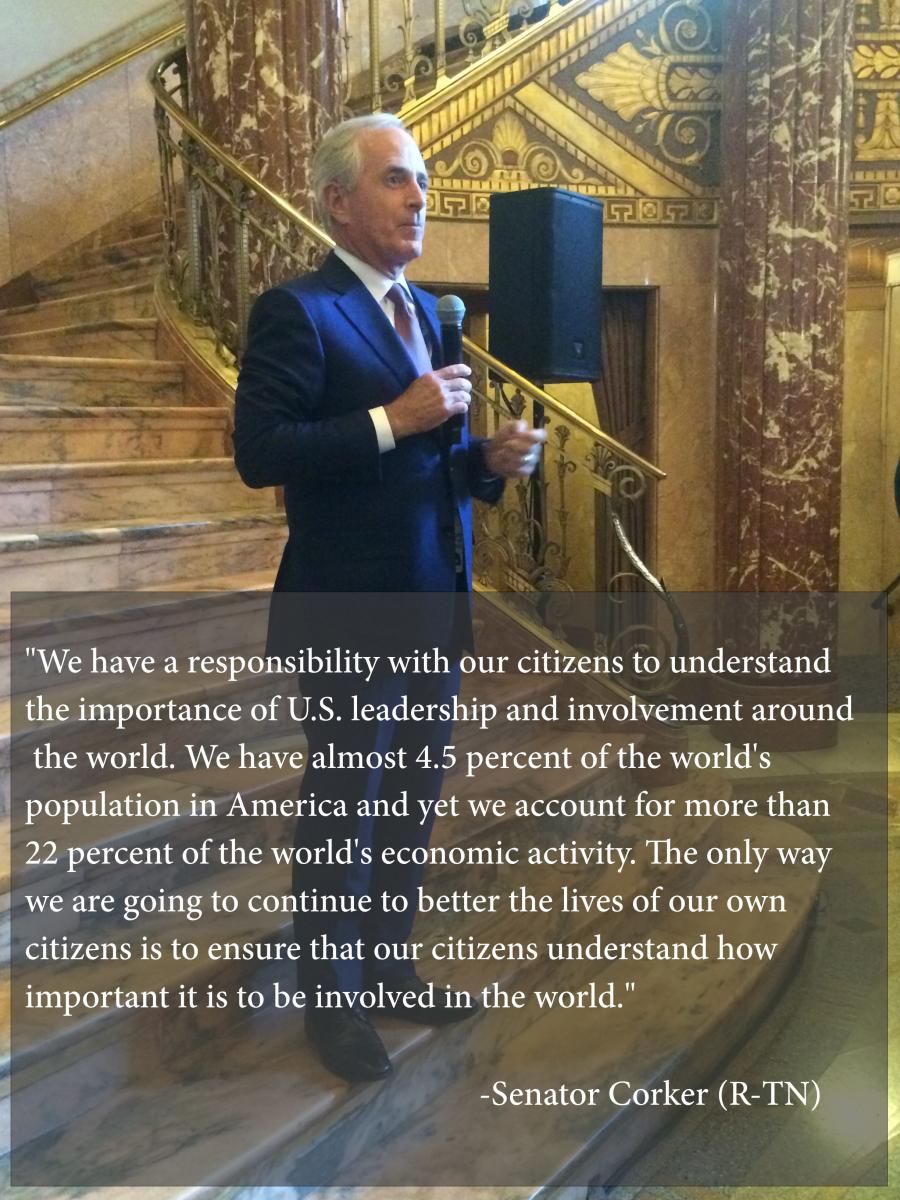 Flush with the Cavaliers’ win, Cleveland shone during convention week in the midst of its renaissance, with informative Clevelanders providing a warm reception. GMF’s Reta Jo Lewis, director of congressional affairs and Lora Berg, resident fellow, joined GMF’s July 19 conversation in partnership with Global Cleveland, led by Joe Cimperman (MMF 2000), and the U.S. Department of State, held in Cleveland’s elegant Severance Hall. We were excited to meet Clevelanders who have returned recently to build lives in the city, in response to the city’s renewal.  Over 70 ambassadors, as well as GMF alumni and city luminaries made up the diverse and enthusiastic audience of several hundred. In her reflections, Reta Jo Lewis highlighted GMF’s enduring commitment to Cleveland, including the Cleveland Foundation. GMF’s Marshall Memorial Fellowship has a significant Cleveland alumni base, and as an integral member of the Transatlantic Cities Network, Cleveland works closely with GMF to explore strategies for urban transformation. Europe is heavily invested in Cleveland's industrial sector. At this time, young New Americans are energizing an aging population, and helping Cleveland to flourish through entrepreneurship and industry. Cleveland’s diversity helps to engage this fine city with the world.

Keynote speaker the Honorable Bob Corker (R-Tennessee), Chairman of the Senate Committee on Foreign Relations offered a compelling case in favor of the United States’ global engagement and leadership, noting that we have 4½ percent of the world’s population in America and yet we participate in 22% of the world’s gross domestic product.  He observed that the only way we are going to continue to better lives in America is to ensure that our citizens understand how important it is for us to be involved in the world and to take a leadership role.

In contrast to some of the crowded areas outside of the political convention where we witnessed hateful messages on trucks, tee-shirts and posters, the substantive conversations we joined adjacent to the convention were grounded and committed in terms of America's global role from leading for health, to leading for commerce and foreign affairs. We were able to join four events, each with strong content related to global engagement both for Ohio and for the United States. We heard Representative Kristi Noem (R-SD) speak up for bipartisanship in Congress and talk about her role leading the Bipartisan Women’s Caucus.  We heard Tom Emmer (R-MN) speak about his commitment to a global role for America including in health, and call for the U.S. to share the promise of liberty and take opportunities to increase trade and diplomatic relations. Congressman Emmer’s state has one of the largest refugee populations.  He calls for working with international institutions to provide security on the global stage. And at the New American Leaders Project event, we heard dedicated Republican staffers talk about avenues for the party to learn to connect with new generations of diverse Americans.

As Reta Jo Lewis emphasized in both Cleveland and Philadelphia, we need to connect with the world, and with the U.S.-European relationship that strengthens us every day. At this historic time, we need to value this power, and ensure that our European partners keep this at the top of the foreign policy agenda. 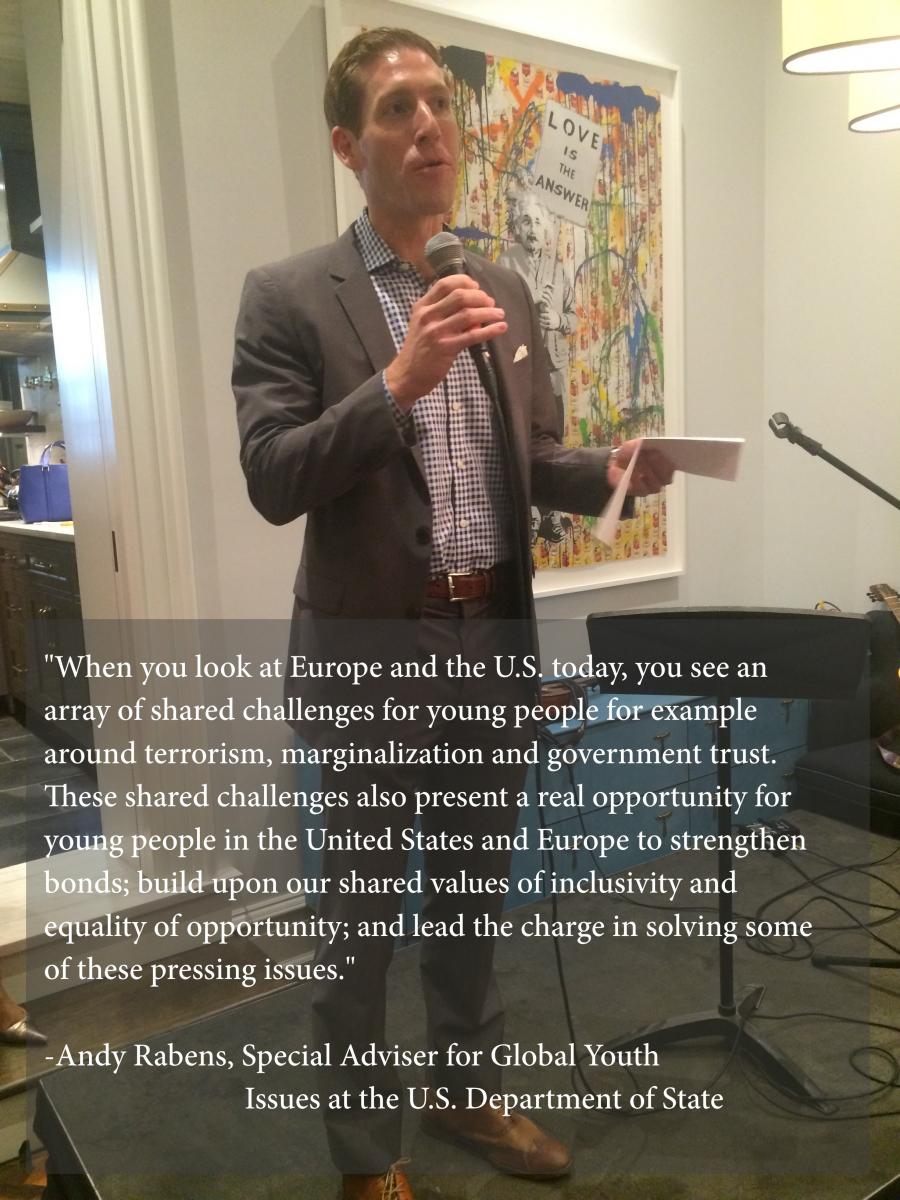 Philadelphia also prepared superbly for the convention. The big city bustled forward through the convention days with its population of 1.57 million, less visibly impacted by the big event than was Cleveland at less than a third of Philly's size. The police presence was far less apparent though securing the city, while grand fleets of drivers managed the influx in a streamlined way. A good natured public took the high temperatures in stride. The convention hall was a remarkable site as seen throughout the U.S., with the full diversity of the country evident. Yet July 25, the day of GMF’s event in Philly, was not a business as usual day for the democrats either. Forces opposed to global engagement were also at work within this party, and the day was further complicated by the DNC email leak traced to Russian sources.

In this context GMF held its transatlantic event at the residence of Pilot Freight Services CEO Richard Phillips, Senator Chris Murphy (D-Connecticut), and Andy Rabens, Special Adviser for Global Youth Issues at the U.S. Department of State joined the GMF conversation with event partners Decade Citizen and Latino Victory Foundation. European legislators in town for the convention, and diverse GMF alumni and stakeholders in the audience demonstrated our growing reach across regions and generations.  Andy Rabens described the present as a time of real opportunity for young people in the United States and Europe to strengthen bonds; build upon our shared values of inclusivity and equality of opportunity; and lead the charge in solving pressing issues” Senator Murphy reiterated the importance of connecting rising diverse leaders to the transatlantic relationship. He emphasized the transatlantic agenda, noting "It is still Europe that the United States calls first when we are trying to put together a response to a global crisis, it is still our two economies together that represent nearly half of the world's trade, it is still our regulatory systems that set the floor for everything from product safety to consumer safety to health care standards. This is a more important partnership than ever before." The Senator called attention to backsliding from democracy around the globe, and cautioned, “If we don't reinvest in the fundamental precepts of our relationship which is free open democracies and liberal economies then this trend line we are seeing across the world away from our model will start to accelerate. We cannot let this election show fraying of our relationship.  We are setting an example for the world and it is one that we have to invest in now more than ever."

As we move toward the election, GMF will continue to focus attention for the incoming administration on the essential transatlantic partnership, and to widen the circle of engagement for transatlantic relations.