Campaigning for the Future of the EU

The upcoming legislative elections in Germany are likely to shape the future terms of the European project. This September we will see the two centric parties compete for the biggest share of the vote, with the parties on the left and right margins currently polling at just below 10 percent each. Five of the six relevant parties are, in essence, pro-European, yet there are marked differences in the parties' positioning vis-à-vis the EU.

The attention lent to the topic also varies widely. At the top of the list, Martin Schulz’s Social Democratic Party (SPD) has included Europe in the subtitle of its electoral program. At the bottom, the Alternative for Germany (AfD), which is expressly Eurosceptic, hardly mentions Europe or the EU outside the context of their critique of the euro. The parties on the extreme left and right of the spectrum, the Left and AfD, mention Europe the least. The Christian Democrats (CDU/CSU), though scoring moderately in the German party comparison, still refer to Europe much more than Emmanuel Macron’s program for the presidential and legislative elections of 2017 (2.0). Notably, the Free Democrats (FDP) liberal party mentions Europe the most of all German parties.

In the CDU/CSU program, Europe is featured in only one heading, namely that of a section entitled “Secure Europe.” Throughout the program, most other mentions are in the context of comparisons or refer to the common agricultural policy (CAP) and defense. The SPD lists Europe not only in the subtitle of its program, but dedicates an entire section named “a better, more social and more democratic Europe” to European politics. In the Greens’ program, Europe is a subsection of the chapter on world politics. The Left’s program sports a section called “for a Europe of the people, not the banks and corporations,” whereas the AfD only mentions the eurozone, not Europe itself in a section header. Further mentions of Europe can be found in the sections on “asylum” and “defending democracy.” Finally, the liberal FDP mentions Europe throughout most of its program, and dedicates a proper section to Europe as “our future.”

The German parties offer visions ranging from a Federal Republic of Europe to a complete dismantling of the EU. 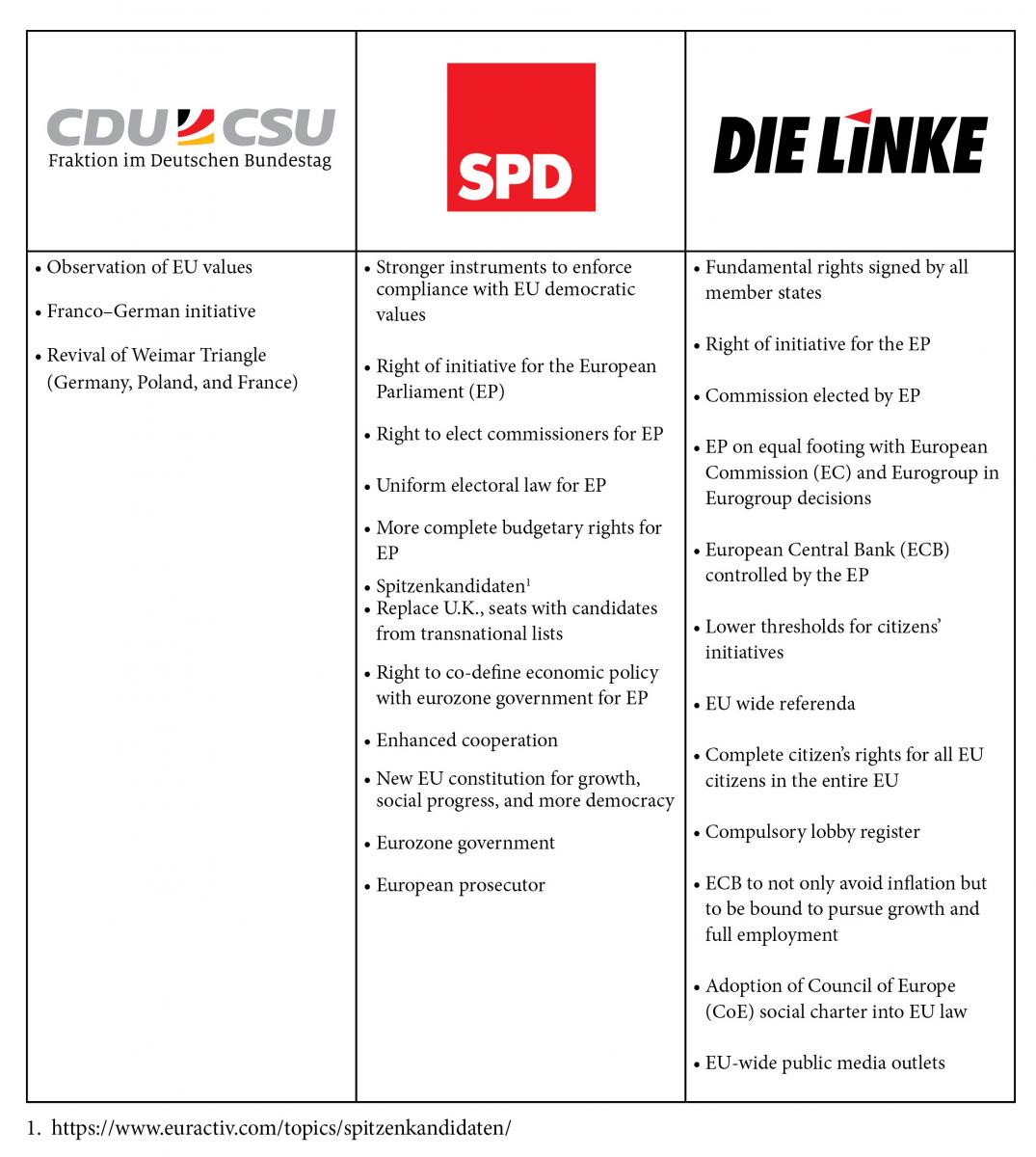 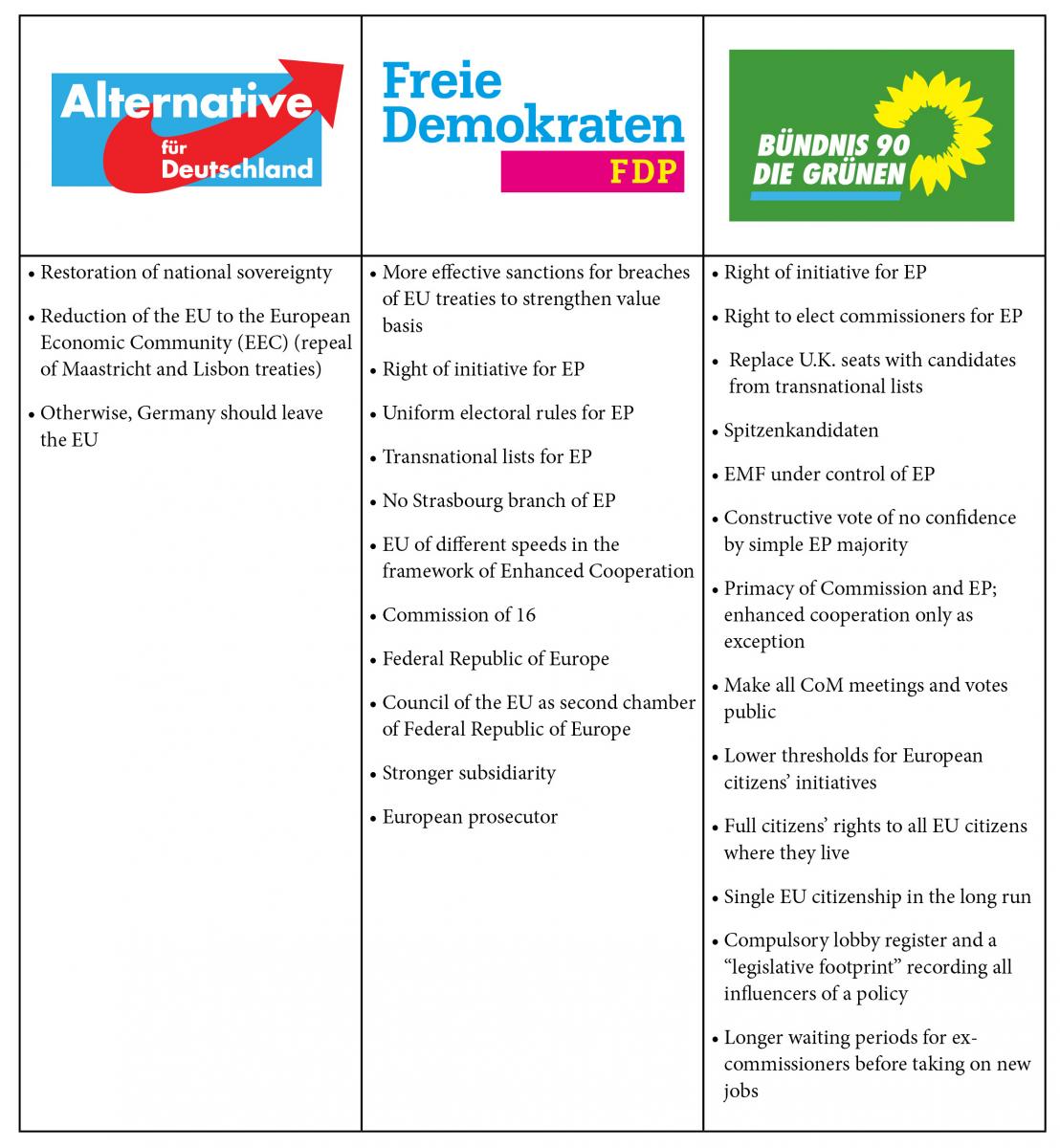 CDU/CSU: Franco–German Initiative and a Revival of the Weimar Triangle

The CDU/CSU sees the EU as a community of values which has produced unprecedented economic wealth. The Common Agricultural Policy (CAP) is mentioned as particularly beneficial in the program. However, the CDU/CSU also points out that there are worrying levels of debt in some member countries, which the CDU/CSU attributes to those countries’ lack of structural competitiveness. Finally, the EU is portrayed as a provider of peace in Europe and elsewhere. For the CDU/CSU, this historical achievement entails that the EU must remain a guarantor of peace and stability.

The CDU/CSU suggests that EU reform is largely up to Germany and France, not the EU institutions. It demands that all member states of the EU abide by its values. Apart from the suggested cooperation between French and German governments, the CDU/CSU would like to revive the Weimar Triangle — France and Germany plus Poland for future consultations on the EU.

The SPD hails the EU as a singular historical success, based on the values of the enlightenment. The EU is described as ensuring freedom and responsibility, economic success and social security, and as a force for equality. The SPD criticizes merely the predominance of national interests in the EU.

The SPD advocates the application of enhanced cooperation within the EU framework. It also emphasizes the special role of Franco–German cooperation but points out that all member states still must be granted equal rights in influencing EU policies.

To democratize economic governance, the SPD wants to equip European Parliamentarians (MEPs) representing eurozone members with the right to co-legislate in the eurozone together with a new eurozone government. The government would consist of the commissioners holding portfolios related to eurozone governance and be led by a new European Minister of Finance and the Economy. The government would be accountable to the “Eurozone Parliament” — the aforementioned group of MEPs.

The party further proposes significant reform of the European Parliament (EP), granting it the right of initiative and “more complete” control of the budget, as well as the right to elect individual commissioners. Secondly, it suggests one uniform electoral regime for EP elections across the EU and wants to maintain the system of Spitzenkandidaten. To replace the withdrawn U.K. delegates to the EP, the SPD proposes to fill the open seats with candidates elected through transnational party lists.

To strengthen the European judiciary, the SPD wants to introduce a European prosecutor. The SPD proposes stronger sanctioning mechanisms to address member states’ infringement of EU law and values. In the longer run, it envisions a new European constitution including a social progress clause.

The Left: Lower Thresholds for Citizens‘ Initiatives, European Public Media, and the Adoption of the Social Charter into EU Law

The Left, while portraying the EU as just, humanist, and solidary in principle, criticizes that its neoliberal economic governance has disproportionately favored corporations over citizens, leading to the rise of inequalities. The left further expresses its concern that the increased securitization of EU policies may lead to breaches of the rights of individuals.

The Left wants to adopt the Council of Europe’s Social Charter into EU law. The party further demands that all EU member states sign the EU Charter of Fundamental Rights. In accordance with this new legal basis, the ECB should then be obliged to add the pursuit growth and full employment to its official mandate and be placed under the control of the EP.

The Left also proposes that the EP have the right to elect commissioners and the right of initiative. Furthermore, it maintains that the EP should be able to co-decide eurozone policies on equal footing with the Commission and the Eurogroup. To make legislative processes more transparent, the Left suggests a compulsory lobby register.

The Left also suggests creating European publicly-financed media outlets that grant a platform to all European democratic movements without discrimination.

Finally, the Left wants to lower the threshold for citizens’ initiatives in the EU and introduce EU-wide referenda.

AfD: Reducing the EU to an Economic Community

The AfD considers the EU to be illegitimate and "a danger" to cultural hertiage and national sovereignty. With regard to Eurozone policies, the AfD expresses the fear that Germany is bearing the cost for other member states’ weak economic performance and disregard for common rules. The EU’s border, refugee, and migration policies are described as a peril for the German people.

The AfD envisions a return to the status of Europe before the ratification of the Maastricht Treaty — a return to the European Economic Community. If case this should prove impossible to achieve, the AfD suggests that Germany exit the EU to restore its national sovereignty.

The FDP pays particular mention to the economic benefits of European integration, although the EU is also praised for its role in protecting human rights. The FDP shares a large portion of the SPD’s vision for the EU, although it is arguably even more ambitious.

The similarities include the stipulation to enhance the EP’s competences to include the election of commissioners and the right of initiative. The FDP, too, wants to promote enhanced cooperation between groups of member states, introduce transnational candidate lists for EP elections throughout the Union, align electoral rules for EP elections across the EU,  and institute a European prosecutor and stronger instruments to punish infringements of the European treaties and violations of European values.

However, the FDP goes beyond the SPD’s ideas in that it also wants to shrink the Commission from 28 to 16 portfolios, transform the Council of the EU into a second chamber of a future Federal Republic of Europe, and abolish the Strasbourg branch of the EP.

In contrast to the SPD, the FDP does not want parliamentary control of eurozone governance.

The Greens: Enhanced Cooperation as Exception, Transparency, and European Citizenship

The Greens assert that the EU has been a civilizing force, creating a unique “European way of life” that is unparalleled in the world.

The Greens would like to see the rights of the EP enhanced, as do the SPD, FDP, and Left. The demands include the right of initiative for Parliament, the replacement of U.K. seats with candidates from transnational lists, and the continuation of the Spitzenkandidaten system. However, the Greens do not want a eurozone government or parliament, but want the existing EP to decide eurozone policies through control of the European Stability Mechanism (ESM). To this end the ESM should be transformed into a European Monetary Fund.

The Greens further stipulate that a simple parliamentary majority should suffice to cast a constructive vote of no confidence against the Commission.

To increase transparency in the legislative process, the Greens want to make all Council of Ministers sessions public. They seek to introduce an obligatory lobby register in the shape of a “legislative footprint,” providing a public record of lobbyists' influence on all European legislation. Commissioners should also have to wait longer before taking new jobs after retiring from public office.

The Greens want a single European citizenship in the future. In the meantime, they propose to grant full access to citizens’ rights to every EU citizen living in any EU member state.

They share the Left’s demand to lower the threshold for citizens’ initiatives in the EU.

Finally, the Greens reject permanent differentiated integration and posit that European progress should observe the primacy of Commission and EP —  differentiation  should not be the standard procedure for European policies and should only take place within the framework of enhanced cooperation.