While Germany's economy is currently booming, the same cannot be said of Europe as a whole. The current electoral campaigns in Germany showcases how this situation can lead to a bifurcation of electoral strategies.

While both governing parties, Angela Merkel's Christian Democrats (CDU/CSU) and Martin Schulz's social democrats (SPD), may profit from the public satisfaction with the current economic situation in Germany, the conclusions they draw from their success regarding European economic policies could hardly be any more different.

The party leaders themselves give an indication of the European economic policy outlook that the two front- runner parties represent. While the former President of the European Parliament  Schulz makes himself out to be an EU federalist the head of government, Angela Merkel, champions intergovernmental initiatives and emphasizes the responsibility of Germany and France for the European project. Their parties' electoral programs are similarly distinct.

One thing beyond debate is the relevance of the next German government for the development of the EU. Whether the next government is led by Merkel or Schulz, their parties' proposals to reform European economic policy will have a major impact on all EU member states.

Mapping the European economic policy proposals by all relevant parties in the ongoing German campaign based on a conclusive analysis of all electoral programs, will help provide insight into potential outcomes.

This policy area receives by far the most attention across the board. Although there is partial overlap and some proposals are rather dubious and general in nature, there are three groups of parties. The CDU/CSU and FDP want to reduce debts, increase market integration, but not supranational control. They favor more international trade agreements made in the name of the common market.

The Left and AfD want to deconstruct the EU in its current shape. Although the Left favors shared debt liability and investment throughout the Union, and the AfD wants to return to as little shared liability and supranational decision-making as possible, both want to fundamentally change the European treaties.

The CDU/CSU maintains its support for trade agreements with international partners and proposes to “fill CETA with life.” With regard to unemployment and economic recovery, the program states the CDU/CSU would be willing to assist other member states under the condition that they observe the Stability and Growth Pact (SGP). Liabilities for loans and debt should not be shared among member states according to the CDU/CSU. With regards to reforming the common market, the CDU/CSU suggests that Germany and France further develop the eurozone and approximate their respective corporate tax levels.

The SPD suggests a large package of economic, fiscal, and monetary reforms. Most prominently, the program calls for an increase in investments and for a reform of the SGP so as to allow for more countercyclical spending. The only commonality with the coalition partner CDU/CSU in this regard is that the SPD, too, posits that government debt should be limited.

Further, the SPD supports the known initiatives of creating a Capital Markets Union, introducing a European financial transactions tax, a common consolidated corporate tax rate (CCCTB), and tax floors. In the way of supranationalization, the SPD suggests placing the ESM under community law. Further, it proposes a eurozone government under the leadership of the relevant Commissioners and accountable to a section of the EP, as well as a European budget.

Another set of proposals is related to tax evasion. The SPD would like to see a harmonization of corporate taxes and introduce an obligation for corporations to pay their taxes where they make the corresponding profits. In order to better prosecute tax evaders, the SPD suggests the introduction of a European transparency register listing all owners, beneficiaries, and responsible executives of all corporations doing business in the EU. It further wants to allow the use of wire-taps to investigate particularly grave cases of tax evasion.

With regard to trade, the SPD wants to involve the World Trade Organization (WTO), as well as the International Labor Organization (ILO), the United Nations Con- ference on Trade and Development (UNCTAD), and the United Nations Industrial Development Organization (UNIDO) in future agreements to better represent different stakeholder interests. It further wants any future trade agreement to be ratified both by the EP and national parliaments and no longer wants to support the establishment of arbitration courts for trade disputes.

The Left wants to fundamentally reform the EU to strike what the program portrays to be a more favorable balance between corporate and individual interests. In order to achieve this, the Left wants the new primary law of the EU to be ratified through national referenda.

The larger efforts to reform the EU aside, the Left also wants to regulate banks more strictly. The party suggests cutting commercial banks and rating agencies out of the process of public lending. They envision a system in which the ECB could lend directly to European governments based on ratings issued by public rating agencies. In so doing, the ECB should be obliged to pursue full employment and economic growth in addition to  avoiding inflation.

With regard to failed banks, the Left wants to prohibit future bail-outs. Private savings should be secured through public emergency funds.

To orderly process the current debt crisis of the Greek government, the Left suggests an immediate debt relief. In the longer term, a European debt conference should be held to assess the sustainability of debt and develop alternative paths for deeply indebted countries. The Left further demands that Germany "repay its war debt" to Greece, without further specification. All liabilities for future loans taken out by any government in the EU should be shared by all EU member states.

The Left opposes the Capital Markets Union and wants to introduce a legal obligation for member states to balance their current accounts.

Finally, the Left also wants a more effective prosecution of tax evasion. In order to achieve this, they suggest that banks be obliged to report on suspicious activities and freeze assets if necessary.

AfD: Exit the Euro, Closing Out of TARGET 2 Balances, and Introduction of a Gold Standard

The AfD fears that the EU, and particularly the Eurozone, put Germany at a disadvantage since it pays the most for bail-outs and unsecured loans.

Once this step is completed, the AfD wants to exit the euro, reimport all German gold reserves and use them to relaunch the Deutschmark as a currency secured by a gold standard.

The FDP wants more reliance on market-based instruments. Accordingly, it champions the phasing-out of the European Stability Mechanism (ESM) in order to prevent future government bail-outs. Instead, the FDP program suggests legislation to allow for controlled bankruptcy procedures for states, based on debt-restructuring under the surveillance of an independent commission. The program further proposes a return to debt ceiling of 60 percent of GDP for eurozone governments. Breaches should be sanctioned automatically and without exception. Quantitative easing should be stopped altogether. The FDP wants to allow member states to exit the Euro without having to leave the EU. Instead of the policy of low interest rates by the European Central Bank (ECB), the FDP wants market-determined interest rates and a set of reforms to make the member states more competitive.

With regard to banking crises, the FDP suggests to abolish the bail-out system. Instead, the party program proposes a bail-in mechanism that would hold share- holders and creditors of the respective bank liable first. In a second step, banks could be saved by a fund financed by the banks themselves, and only in the last instance and when the stability of the financial market is in peril, through a fiscally neutral, government-issued loan.

In order to react to the digitalization of the economy and to create new growth, the FDP posits that a Digital Single Market must be created.

The Greens also favor supranational solutions to economic hardships. Accordingly, they suggest a “Green New Deal” for Europe, i.e. a European investment plan. This plan is envisioned as being financed through a new European fiscal compact that would allow the EP to manage a European budget and a European Future Fund which could be distributed through the European Investment Bank (EIB). The Greens would like a large part of this fund to be dedicated to the construction of pan-European transportation grids. As a first step toward tax harmonization, the Greens support the CCCTB.

Instead of creating new institutions to develop the eurozone, the Greens prefer to further integrate the eurozone into the community and its system of democratic checks. They suggest that the ESM be transformed into a European Monetary Fund (EMF) and the head of the eurozone be the new Commissioner for Economic and Monetary Affairs.

The Greens further demand that all future trade agreements must take into account more stakeholders’ views. To this end, they want to arrange these agreements under the auspices of the WTO and ILO. Additionally, they suggest the creation of a new type of independent dispute courts to which both businesses and individual could bring cases.

Finally, they suggest higher equity-capital ratios for banks and shadow-banks and favor bail-ins over bailouts. 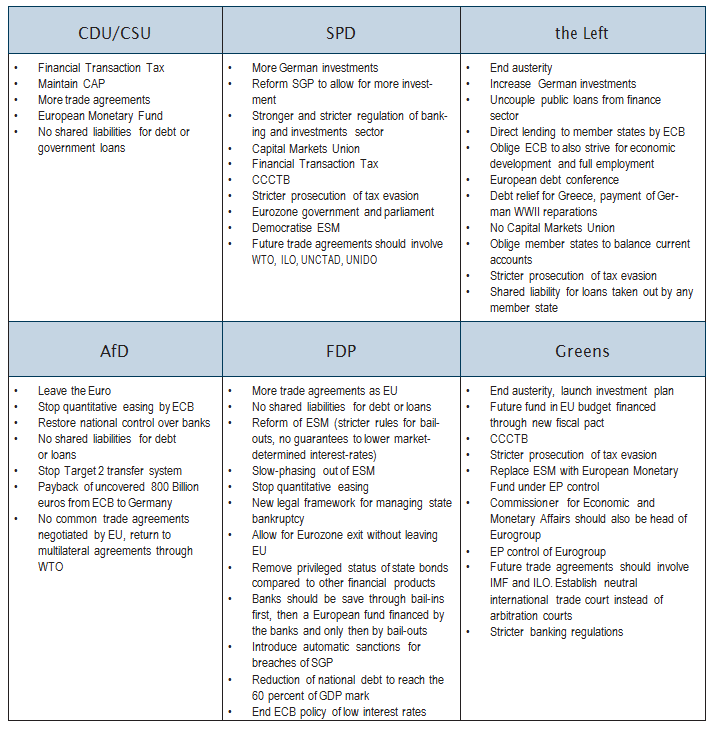