Even outside of Chancellor Merkel’s famed “beer tent speech,” where she first asserted that Europe needs for more defense auton­omy, European defense policy had made its way back onto the European agenda.

On average, Germans are more open to EU defense in­tegration than other EU member states, with current support at around 85 percent. Thus parties risk relatively little in proposing EU defense policies. Beyond diffuse support, however, the parties need to cater to very dis­tinct audiences and their concrete proposals regarding European defense policy vary widely.

Security, both within and without the EU, plays a signifi­cant role in all electoral programs. None of the proponents of more European defense integration want to replace NATO. They all explicitly favor EU–NATO cooperation. In general, CDU/CSU, Greens, SPD, and FDP are in favor of deeper integration, with the CDU/CSU wanting the most modest increase and the SPD and FDP the most significant. The Left is an exception in the defense arena, it wants no cooperation with NATO whatsoever and expresses no wish for more defense cooperation. The AfD prefers to keep the existing structure of NATO but does not want further European defense integration.

The CDU/CSU has signed on to the goal of a European Defense Union (EDU). There is no specific information on what the EDU might look like in practice. The CDU/CSU also backs the Commission Proposal for a European Defense Fund. With regard to internal security, this party would like to see more information exchange to effectively fight international crime and terrorism.

The SPD expressly prefers civil solutions over military ones. Yet, the program not only suggests more coordi­nated European preventive action, but also a strength­ened Common Foreign and Security Policy (CFSP) and the use of Permanent Structured Cooperation (PESCO) to create an EDU, with a European army as a long-term goal. The SPD wants to impose stricter rules for the export of arms from the EU. To improve internal security, the SPD wants to intro­duce a European prosecutor, strengthen the roles of EU­ROPOL and FRONTEX in fighting terrorism, and improve the exchange of information between member states in the fight against terror by creating a European anti-ter­ror center.

The Left: Abolition of the European Defense Agency, Stop of all Arms Exports, and Looser Ties with NATO

The Left is explicitly anti-militarist and accordingly op­posed to defense cooperation. It proposes the abolition of the European Defense Agency (EDA), a prohibition of all arms exports from EU member states, and a halt of the cooperation of the EU with NATO.

AfD: No European Defense Integration, National Sovereig­nty and Lifting of Sanctions against Russia

There is not much the AfD wants to delegate to the Eu­ropean level, least of all defense. It posits that defense must remain a matter of national sovereignty and that NATO is sufficient for coordinating defense matters with other states. The party would also like to see the European sanctions against Russia lifted.

The FDP has ambitious goals with regard to defense in­tegration. Not only does the party want to establish a European army under the control of the EP, it also wants to pool and co-develop equipment, establish a shared head­quarters and coordinate European cyber-security efforts. The FDP further suggests to transform EUROPOL into a federal EU police force and create a European secret service, both accountable to the EP. The party further wants to use civil means such as the continued sanc­tions against Russia, as well as a strengthened Europe­an Neighborhood Policy (ENP) to deepen the ties with the eastern neighborhood.

The Greens: Informa­tion Exchange and Stronger Neighborhood Policy, but No Increase in Military Expenditure

The Greens are also explicit in their preference for non-military solutions. They want to support civil solutions organized through a strengthened and harmonized CFSP, Com­mon Security and Defense Policy (CSDP) and European External Action Service (EEAS). They further propose to strengthen the ENP and to improve information sharing between European police forces, as well as the use of sanctions such as the ones imposed on Russian indi­viduals. While they reject the increase in military spending toward the 2 percent of GDP goal, they would also like to see more defense inte­gration under EP supervision. 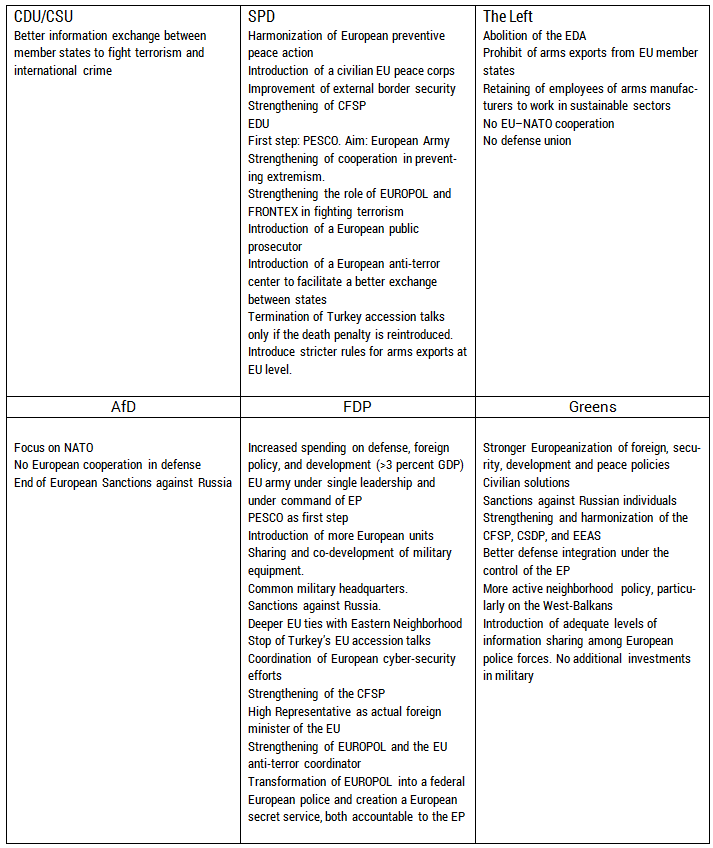 Open European Dialogue
All Eyes on Germany — Forming a Government