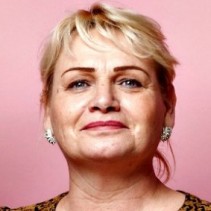 MEP Soraya Post receives GMF’s Transatlantic Inclusion Leaders annually at the European Parliament in the context of her work to strengthen women in politics and to address racism and xenophobia across the continent. GMF cohosted a welcome dinner for MEP Soraya Post with the EU Parliament Congressional Liaison Office on her first visit to Washington on election eve, gathering civil society activists who are working to increase the participation of women in elected office across the United States and around the globe. On the occasion of her visit, she shared these reflections.

Q: According to the Reflective Democracy Project, white men in the U.S. make up 31 percent of the population, and hold 65 percent of elected offices from the county level to Congress. Yet, as demonstrated in research on the business case for diversity, diverse leadership results in more sound decision-making. So here in the United States, we are running our political teams at a deficit.

How does this compare to your situation in Sweden and what do you recommend in this regard?

MEP Post: It is a democratic problem when Parliaments and other official institutions are not representative — as in representing the populations of the society they are supposed to serve. We can, I believe, see this lack of mirroring representation in every democratic country. Despite leading the gender equality index for several years, Sweden still has a lack of women’s representation in all areas. Men have 56.4 percent of the seats in the Parliament and women have 43.6 percent. Even though this is not a major difference, it is still there, and men continue to be in the majority. In Sweden we also have a population where 12 percent are born in another country, but only 8.3 percent of Parliamentarians are from this group. The same representational difference is visible when we see that 46.8 percent of Parliamentarians have higher education (post secondary school/ gymnasium of more than three years), in comparison to only 19.6  percent of the population at large. Another example is the representation of young people (under 30 years). In Sweden, 19 percent of the population is 30 or below, but only 10.6 percent of the seats in the Parliament are held by a person under 30.

I would say that the political parties must be much more open to invite and include people whom we currently lack in the political system and in positions of power. My party, Feminist Initiative, has been working on these issues from the start. This can be achieved by creating separate entities in which the excluded groups find strength, but the traditional parties must realize that they have to change their structures to accommodate more diversity. Single mothers are, for example, very rare in politics — this is one example of how expectations and organizational culture must change to accommodate life situations where a person cannot work late nights. And the parties have to be attentive to include and nominate persons of minority background to positions on boards, and to local and regional government as well as the national Parliament. If the political parties experience this as a struggle, they will have to transform themselves all the more, since there is no lack of intelligent and engaged persons in these underrepresented groups.

Q: In the United States on November 7, elections are underway at the state level in Virginia and New Jersey. Women comprise 19 percent of the Virginia legislature, compared to 30 percent in New Jersey and 24.9 percent nationwide. We do expect to see this change for the better with strong women candidates stepping up.

MEP Post: I travel to all over Europe as well as over the world and always prioritize to meet and empower women who are active in NGOs or in political parties. Together with the leader of my political party Feministic Initiative, Gudrun Schyman, I have visited several European Union countries to give lectures and organize meetings, in part with the goal to invite and include women in the political arena. In Norway, Denmark, and Finland this has resulted in the founding of feminist parties, and we already have these parties in Germany and the U.K. Italy and Spain are also organizing. Every country has it is history and also political system in which to manoeuver, and there is not a single route to create more space for women in politics, but a common dominator is of course to organize and also to empower. We must both work together and also strengthen individuals to come forward. Here I believe that Europe and the U.S. have a lot to offer each other; in the U.S. individual achievement is promoted and well structured, while in Europe there is more focus on organization and group structures. In order to break patriarchy we need both — women that come forward and dare to struggle, and also a strong structure to carry forward the struggle of many women. Together we will make a change. It is not a one-woman show either.

Q: You have been leading some strong efforts for the political advancement of the Roma people, Europe’s largest minority. And you are an extraordinary role model yourself for rising young diverse leaders who aspire to higher office.

In the face of racist currents at this time, what are your leadership tips for maintaining optimism and continuing to move the agenda forward for inclusion?

MEP Post: We need to be optimistic; otherwise the fight to change the world for the better will be very hard to continue. And there are many things to be optimistic about. For example the EU Parliament just adopted my report for Roma rights and fighting antigypsyism. The EU has acknowledged the holocaust of Roma and Sinti. We continue to make progress in questions that we almost could not have dreamed about before. The racist and Nazi movements are very troubling, I admit. But the fight for equality, love, compassion, and human rights for everyone is the way to stop them. I truly believe this. In a society where everybody is free to be who they are, and where human rights are secured for everyone, there is no place for hate and fear. Together we can accomplish wonders — we need to remember that.