As NATO Looks South, What Do Mediterranean Partners Think?

After many years of focusing on its East, NATO finally took steps toward a more robust strategy South at the Brussels Summit last week where it adopted a Package for the South. It outlines three core objectives: to strengthen NATO’s deterrence and defence against threats emanating from the south; to contribute to international crisis management efforts in the region; and to help NATO’s regional partners build resilience against security threats.[1] As Southern partnerships are set to be at the core of this new strategy, it is worth considering the expectations of NATO’s Mediterranean partners.

GMF’s report on the Future of NATO’s Mediterranean Partnerships, released the day after the Summit, is largely based on perspectives from Mediterranean partners.[2] It shows that there is a rationale for closer partnership as security priorities on both sides of the Mediterranean and the Atlantic have converged. Counterterrorism and human security are at the top of agendas in the north and the south. Border control, maritime, and cybersecurity are shaping policies around the region, and will remain central concerns in the years ahead.

In this context, Mediterranean partners express interest in a deeper engagement with NATO as an influential strategic actor, and as a practical contributor to their security needs. On the strategic level, partners would like more regular and focused multilateral dialogue. On the practical level, partners are interested in counterterrorism and counterinsurgency training, intelligence sharing, border control, cybersecurity, civil protection, and access to NATO courses and Science for Peace and Security projects.

This interest coexists with a general uncertainty about NATO’s aims in the South, and a broad sensitivity to questions of national sovereignty. Some partners retain images of the Alliance based in Cold War perceptions. Others remain concerned about the aftermath of the intervention in Libya. Views of NATO are closely tied to perceptions of specific allies, above all the United States. Among its concluding recommendations, GMF’s report suggests that the new Package for the South can alleviate some of these concerns. As NATO proceeds, it should be sensitive to how its past actions have shaped present perceptions. Having a clear message for its partners today will help build better partnerships in the future. 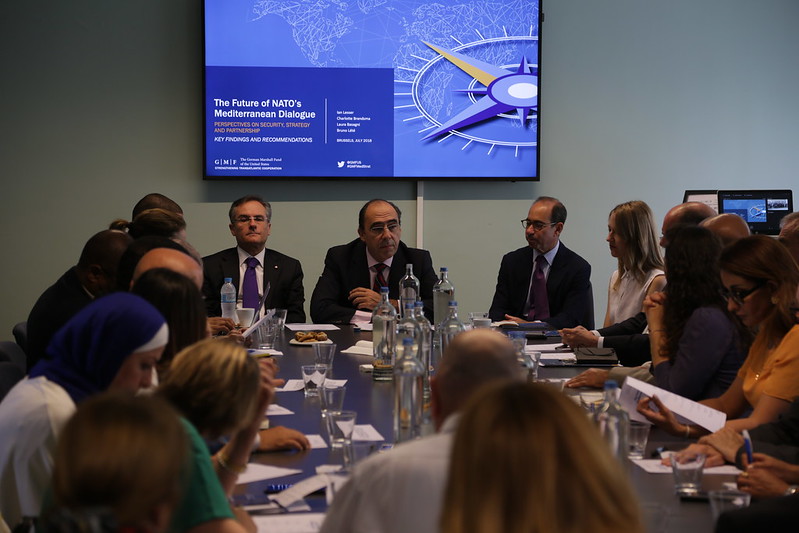 [1] Among others, the Alliance also declared Full Capability of the Regional Hub for the South in Naples; the launch of a non-combat training and capacity building mission in Iraq; continued commitment to its longstanding relations with Jordan and Tunisia, and support for the political process in Libya. Full text of the Declaration can be found here: https://www.nato.int/cps/en/natohq/official_texts_156624.htm.

[2] The analysis of the status and prospects for NATO’s Mediterranean Dialogue (MD) — the partnership program with Algeria, Egypt, Israel, Jordan, Mauritania, Morocco, and Tunisia — is based on extensive interviews with officials and experts in each of the MD countries, as well as stakeholders inside and outside NATO.