How Influential Will Europe’s Populist Parties Really Be in the Next European Parliament?

This weekend’s European Parliament elections are being portrayed as a contest for the fate of Europe. Up to one-third of seats are predicted to be won by parties that can be identified as populist. They claim to represent “the people” against “the elite,” refugees, multinationals, or different “others.” Among them, far-right parties, set on taking powers back to national capitals and bent on fundamentally changing the EU, are expected to make significant gains. If the rise in populism in general could be argued to have shaken up tired European politics, its far-right variant is a challenge to the EU project and to European democracy. However, it is one that can be driven back if the other political parties change gear.

Populist parties have been very loud, but their impact on actual policymaking in the European Parliament—the EU’s co-legislator with the Council—has been minimal. They have been successful in shaping the agenda when mainstream parties have been captured by their rhetoric, given credit to their stoking of fears, and adopted their political agendas. But the rise of the far-right populists can be countered if the mainstream is not co-opted. The next European Parliament will be one theater where this confrontation will take place.

"Populist parties have been very loud, but their impact on actual policymaking in the European Parliament has been minimal."

As we argue in a paper to be published next week once the election results come through, populists of all stripes have not been able to act cohesively in the European Parliament so far. They are scattered across different parliamentary groups and disagree on many vital issues—from trade to Russia, from climate change to security policy, as the table accompanying this article shows. Crucially, while most dislike the EU, they disagree on how to cooperate within it. Populists on the right all mobilize anger and votes to fend off immigration, but they are unlikely to find together a policy to govern migration. And they are likely to quarrel over how to spend the EU’s budget.

To overcome such differences, Italy’s Lega, France’s Rassemblement National, the Freedom Party of Austria, Germany’s Alternative für Deutschland, the Danish People’s Party, the Finns Party, the Netherlands Freedom Party, and the Czech Republic’s Freedom and Direct Democracy have committed to creating a new political group to be called the European Alliance of Peoples and Nations. But not all of Europe’s major far-right populist parties are included. Poland’s Law and Justice Party has thus far not taken up the offer, weary of the Russian links and pro-Putin attitudes of some of the parties involved. Nor has Nigel Farage’s new Brexit Party, which is expected to win 30 percent of the vote in the United Kingdom. The position of Hungary’s Fidesz, which is currently suspended from the conservative European People’s Party group, remains to be seen.

Even if far-right populists manage to form a large parliamentary group, this does not necessarily ensure that they will always vote together. To date, populists in the European Parliament have shown very low levels of cohesion, their groups have frequently split along national lines, and their members often do not turn up to vote. The European Parliament will most likely continue to have a pro-EU majority, but one based on more variable coalitions than before.

"Even if far-right populists manage to form a large parliamentary group, this does not necessarily ensure they will always vote together."

However, policymaking has never been the main aim of the populist parties. Their success lies in their ability to frame the political debate, to take center stage despite representing minority views, and to nudge other parties to address the issues they raise, either by making the political center shift toward them or by taking over the space previously occupied by traditional parties.

This is where their potential in the next European Parliament lies. For example, it was in the European Parliament that the UK Independence Party gained the platform from which to spread anti-EU narratives within the United Kingdom, capturing the Conservative Party in the process. Our paper shows how populist “us versus them” narratives found their way into the rhetoric of the more mainstream groups in the parliament. For example, debates saw various members exchanging populist-style banter on how the trade agreement with Canada was actually for “the multinationals” or, on the other hand, a remedy against Donald Trump. Both were portrayed as “others” against which “the Europeans” must be protected.

The far-right populist parties have had the greatest impact by succeeding in splitting the center-right or moving it further to the right. Fundamental values of the EU, such as academic freedom as a human right, were put into question by the divisions within the European People’s Party thanks to the influence of Fidesz.

The next European Parliament will not come to a standstill if it has a stronger contingent of anti-EU, far-right populists—but complacency about their potential influence risks leading the EU into irrelevance. In recent years these parties have thrived on the inability of pro-EU forces to counter their nationalist rhetoric, have set the stage for debate, and have changed what is considered to be “mainstream.”

Instead of allowing populism, and much less its far-right variant, to set the tone of the political debate in Europe—and instead of accepting constructed and manipulated fears as realities, mimicking populist leaders and chasing after their votes—pro-EU forces need to take greater ownership of their project and build an engaging pan-European politics that addresses the challenges of our times. 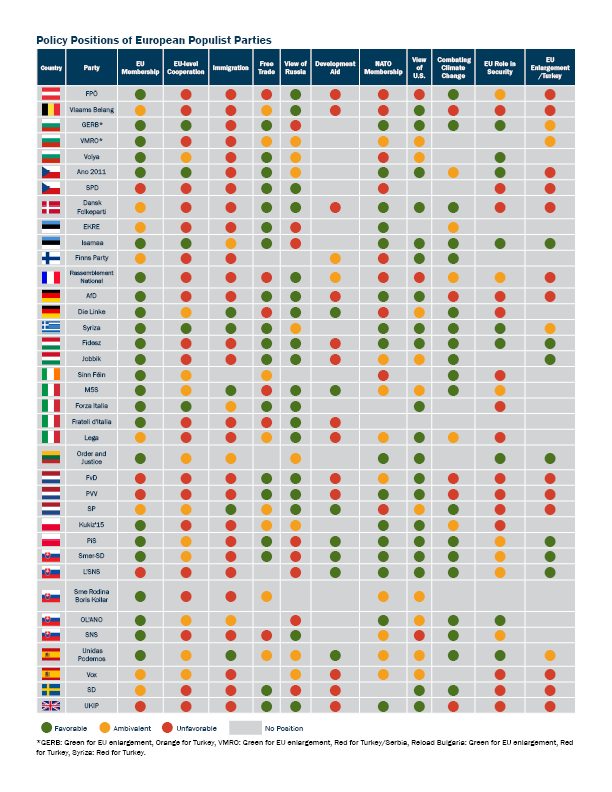