As the election results continue to be counted, allegations of voter fraud and conspiracies maintaining that the election was stolen are circulating online. Facebook has taken steps to combat election misinformation, including by fact checking misleading posts and taking down groups that spread conspiracies. Despite these efforts, conspiracies promoted in these groups continue to circulate and gain interactions.

Reopen groups, which came into existence largely in March and April 2020 and were initially focused on opposing government mandated lockdowns and coronavirus prevention efforts, have since become vectors for a variety of dangerous conspiracy theories, from those linked to QAnon to anti-vaccine content.

Now—in the last 48 hours—we see them changing focus again to push disinformation on voter fraud. Significantly, such conspiracies are circulating in groups connected to battleground states in the presidential race:

Members of these groups have been spreading disinformation concerning voter fraud, ranging from false accusations that ballots are being smuggled into polling places in suitcases to fears that poll workers colluded in de facto voter disenfranchisement by giving voters unreadable markers/Sharpies. The most baroque example is associated with QAnon, insisting that official ballots have a secret watermark, and fake ones without a watermark will be thrown out.

Facebook took action against one such group, Stand Up Michigan to Unlock Michigan, after the group organized a protest in Detroit. It also took down two “Stop the Steal” groups. The first gained over 360,000 members in 24 hours who shared violent rhetoric and helped organize a dozen protests in key battleground states. Facebook removed the group on Thursday; spokesman Andy Stone justified the takedown by stating that the group was “organized around the delegitimization of the election process, and [that Facebook] saw worrying calls for violence from some members of the group.” By Thursday afternoon new “Stop the Steal” groups had come online. Facebook removed the largest of these late Friday morning, after it had gained 90,000 members (though at least two public groups with over 80,000 and 37,000 members respectively, and a private group with 9,000 members remained online).

The conspiracy stories continue to be shared both in posts and in the comments section of the groups that remain online, and garner about fifty likes on average. At the upper range, some have hundreds of likes and comments. Even posts that feature a fact-check or an overlaid screen (example in screenshots below) continue to receive positive engagement. The comments section makes it clear that viewers are not persuaded by the fact-checks.

Many of the most popular election disinformation articles are being shared in a mix of public and private Reopen groups. Stories include:

Here are just a few examples of content that remains in the Reopen groups: 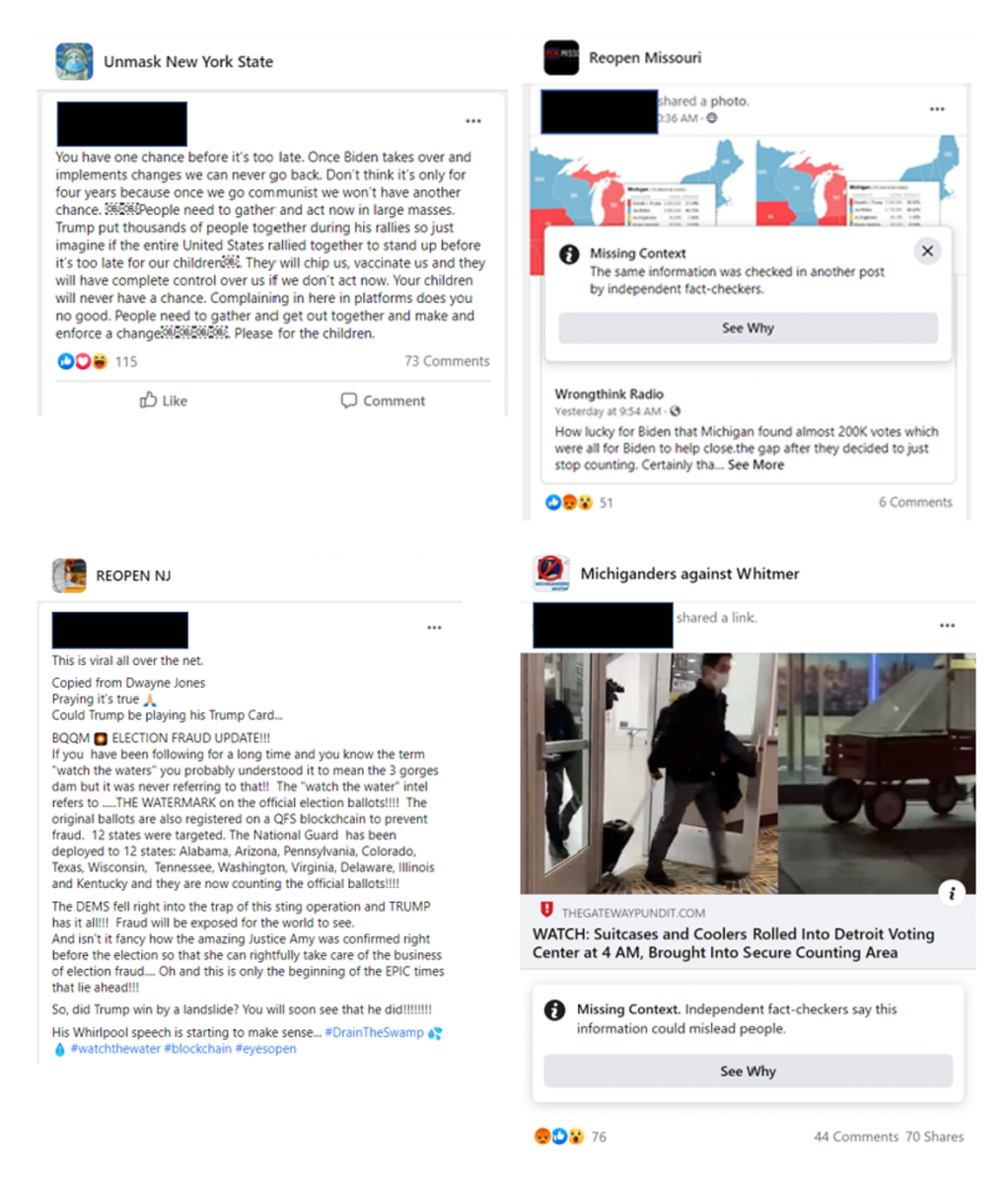