Welcome to the U.S. Foreign Policy Monitor where every week we track the “who,” “what,” and “so what” for the new U.S. administration and Congress. This installment of the Monitor looks at President Biden’s first foreign policy address, U.S.-Russia relations, and two key appointments to the White House and Pentagon. Sign up here to receive the newsletter every Friday in your inbox.

Last Thursday, President Biden gave his first foreign policy address at the U.S. Department of State. Biden’s speech affirmed the centrality of allies, characterizing his immediate post-inauguration efforts. Biden said he planned to reform “the habits of cooperation and rebuilding the muscle of democratic alliances that have atrophied over the past few years of neglect and, I would argue, abuse.”

Biden also highlighted the centrality of climate policy and multilateral frameworks to tackle global problems (including climate and pandemics). He announced a Global Posture Review of U.S. forces led by the Pentagon, which freezes the planned withdrawal of U.S. forces from Germany. He also ended U.S. support for offensive operations in Yemen.

You can read the speech in its entirety here, or watch President Biden deliver his remarks. National Security Advisor Jake Sullivan also previewed the speech during a White House Daily Briefing.

For this week’s “In Focus,” GMF Non-resident Fellow Michael Kimmage discusses U.S-Russia relations in the new Biden administration in this 20-minute video. The conversation includes Kimmage’s thoughts on U.S. strategic priorities, engagement with allies and partners, and the jailing of opposition figure Alexey Navalny, among others. 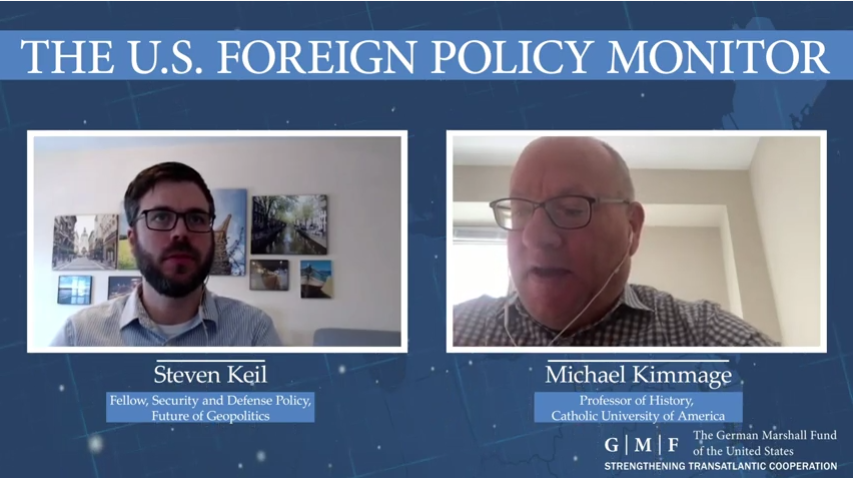 Jon Finer currently serves as the White House deputy national security advisor. Prior to joining the Biden administration, Finer oversaw political risk and public policy at Warburg Pincus, a New York-based private equity firm, and worked as a senior fellow at the Council on Foreign Relations. He joined the Obama administration as a White House Fellow, and then took on a series of jobs, including senior advisor to then-Deputy National Security Advisor Antony Blinken, special advisor and speechwriter to then-Vice President Biden, and finally, chief of staff and director of policy planning at the U.S. Department of State. Finer spent his early career working as a foreign and national correspondent at The Washington Post, where he covered the war in Iraq, as well as conflicts in Gaza, Georgia, and Lebanon. Finer received his law degree from Yale University and his M.A. from Oxford, where he was a Rhodes Scholar.

Mara Karlin is acting assistant secretary of defense for international security affairs. A defense expert, Karlin previously served as associate professor and director of the strategic studies program at the Johns Hopkins School of Advanced International Studies. Prior to working in academia, Karlin gained extensive national security experience by serving under five U.S. secretaries of defense and working on a range of policy topics—from defense planning to regional issues in the Middle East, Europe, and Asia. During the Obama administration, she served as deputy assistant secretary of defense for strategy and force development. Karlin received her M.A. and Ph.D. from Johns Hopkins SAIS.

“The new secretary has installed a slate of well-respected national security professionals in his front office who are working to restore order to the Pentagon’s policymaking process. Those staffers are already making changes to ensure that civilian voices are included in policy meetings.”

“Secretary of State Antony Blinken told CNN's Wolf Blitzer that the insurrection attempt on the Capitol by President Donald Trump's followers has hurt the United States' ability to speak up for democracy and human rights, though he remains optimistic about American institutions.”

“Republicans spent about as much time at the onset of the confirmation hearing reprimanding Tanden [nominated to head Office of Management and Budget] for her social media use as they did posing questions about policy, including regulatory reform and border security. Democrats have labeled Republicans hypocrites for rebuking Tanden...”

“Terrell, a Capitol Hill veteran who has worked closely with Biden for years, inherits a treacherous political environment running the office tasked with coordinating the president’s agenda with members of Congress [….] Those who worked with Terrell in the Obama administration acknowledge she faces an uphill battle to win over Republicans during legislative talks, as Congress has become more partisan over the past several years.”

“The Biden administration is preparing to remove nearly all the remaining federal prosecutors former President Donald Trump appointed across the country, while making accommodations to allow a couple handling highly sensitive investigations to continue with their work, a senior Justice Department official said Monday night.”

“[Biden] will have to clearly communicate his policy objectives on important international issues and then consistently work to advance them. And he will need to avoid early missteps, knowing that other world leaders are harsh judges of new presidents and have long memories.”

“No matter what strategies the two sides pursue or what events unfold, the tension between the United States and China will grow, and competition will intensify; it is inevitable. War, however, is not.”

“Iran’s foreign minister said on Sunday that if the U.S. wanted to restore the terms of the nuclear agreement it exited, the onus was on the Biden administration to live up to the deal.”

“….Washington should embrace issue management, which is unsatisfying yet productive. Small steps in the right direction make a difference. For the team now assuming positions of responsibility, some of the chief foreign policy dilemmas facing the United States fall squarely in the ‘manage rather than solve’ category.”

Bureaucratizing to Fight Extremism in the Military, Doyle Hodges, War on the Rocks.

“Violent domestic extremism is a long-term problem, and extremism in the military could have a devastating effect on public trust in the armed forces. The military organizational response needs to acknowledge this and address it with one of the most potent tools in the military arsenal: bureaucracy.”