On Wednesday, May 5th, GMF’s Urban and Regional Policy Program and Berlin Office co-hosted a salon dinner to explore Berlin’s creative transformation since the fall of the Berlin Wall twenty-five years ago.  As the seat of creative power in Germany, Berlin has become a magnet for artists, musicians, architects, tech entrepreneurs, and other “creatives” who are transforming the city’s physical, social, and political landscapes while stoking its economy. Creative industries are a major economic force in the city with over 20% of local businesses engaged in this sector generating 7.8 billion Euros in sales since 2009. From homegrown entrepreneurs to U.S. expats, two generations of creatives have played a major role in Berlin’s evolution.  This transformation, however, has not been without challenges. GMF held a private dinner and discussion with key policymakers, artists and innovators to explore the past and future of this vibrant city as part of its Legacy of ’89 Series.

The setting for the dinner was the FAME Katerschmaus restaurant within the Holzmarkt redevelopment project on the banks of the Spree River; this location was an important backdrop for the dialogue because of its proximity to the remnants of the Wall, its recent history as a contested redevelopment site, and its present status as a destination for community-driven creative development.

The group of twenty-three Germans and Americans assembled for the dinner represented various aspects of Berlin’s political, technological, and creative scenes from music and performing arts to philanthropy and start-ups.  Through a mixture of facilitated group dialogue and small discussions, guests reflected on the role that creativity and innovation has played in Berlin’s transformation since 1989 while discussing how these same principles can help tackle the city’s most pressing issues. A graphic recorder, Sebastian Lörschner, documented the conversation through images and words. 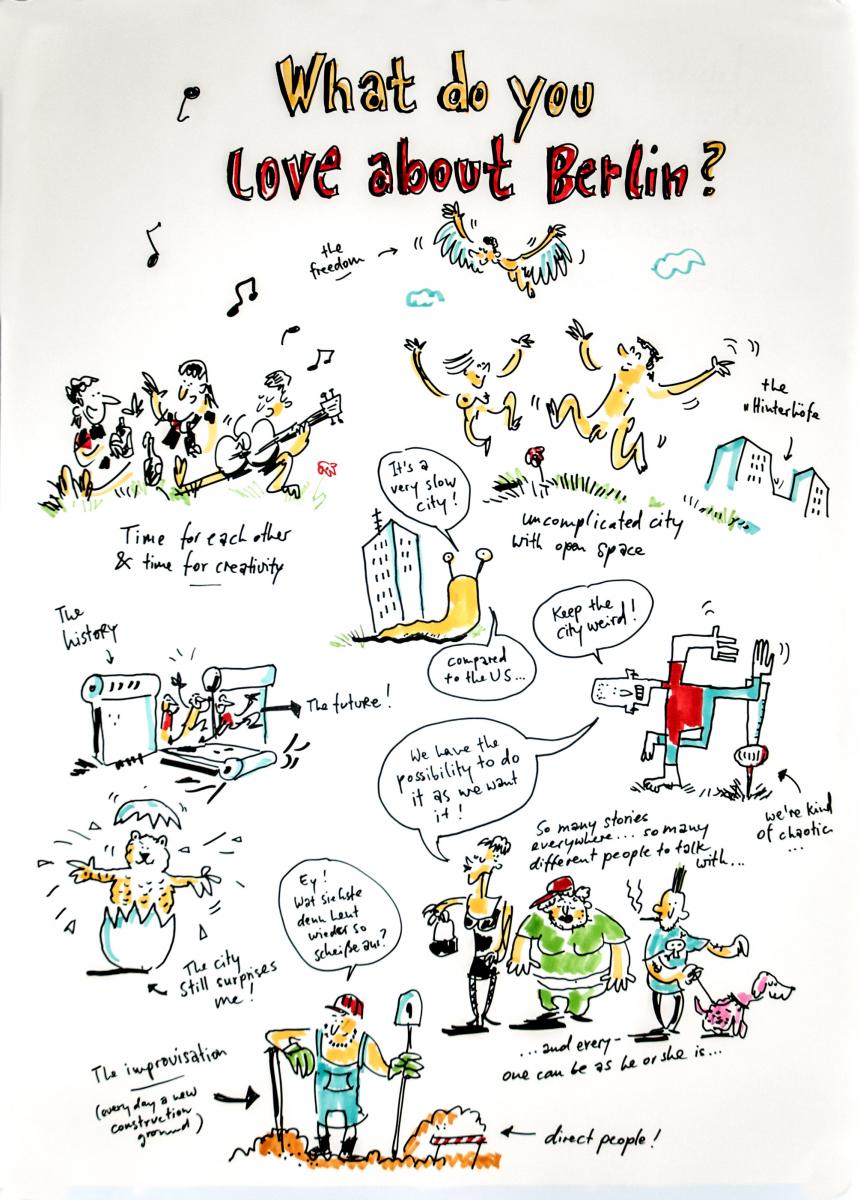 In the opening discussion, guests shared their connection to the city and what they loved or appreciated about Berlin. Lörschner’s drawing highlights some of the themes, including the sense that Berlin’s transformation is not complete, and that this incompleteness creates space for exploration, creativity, and innovation.  There was also an interesting contrast among participants in their characterization of the qualities of the city—at once celebrated for a sense of chaos and multi-dimensionality, while also appreciated for its slowness and openness.

As the discussion turned to a reflection of Berlin’s cultural transformation, the participants agreed that the city’s unique history and resulting cultural milieu make it unlike any other U.S. or European city. One guest noted that if West Berlin did not exist, then today’s Berlin would not be possible; the physical isolation of West Berlin from the rest of West Germany created a unique environment that propelled the city forward as a creative destination after the Wall fell. The reality of Berlin’s unique past quickly shifted the conversation its creative transformation.  Here the sense of comradery in the creative community was a common theme in the dialogue; however, there was some debate about the importance of formal institutions, boards, and funding sources for maintaining the vibrancy of the city’s creative scene. 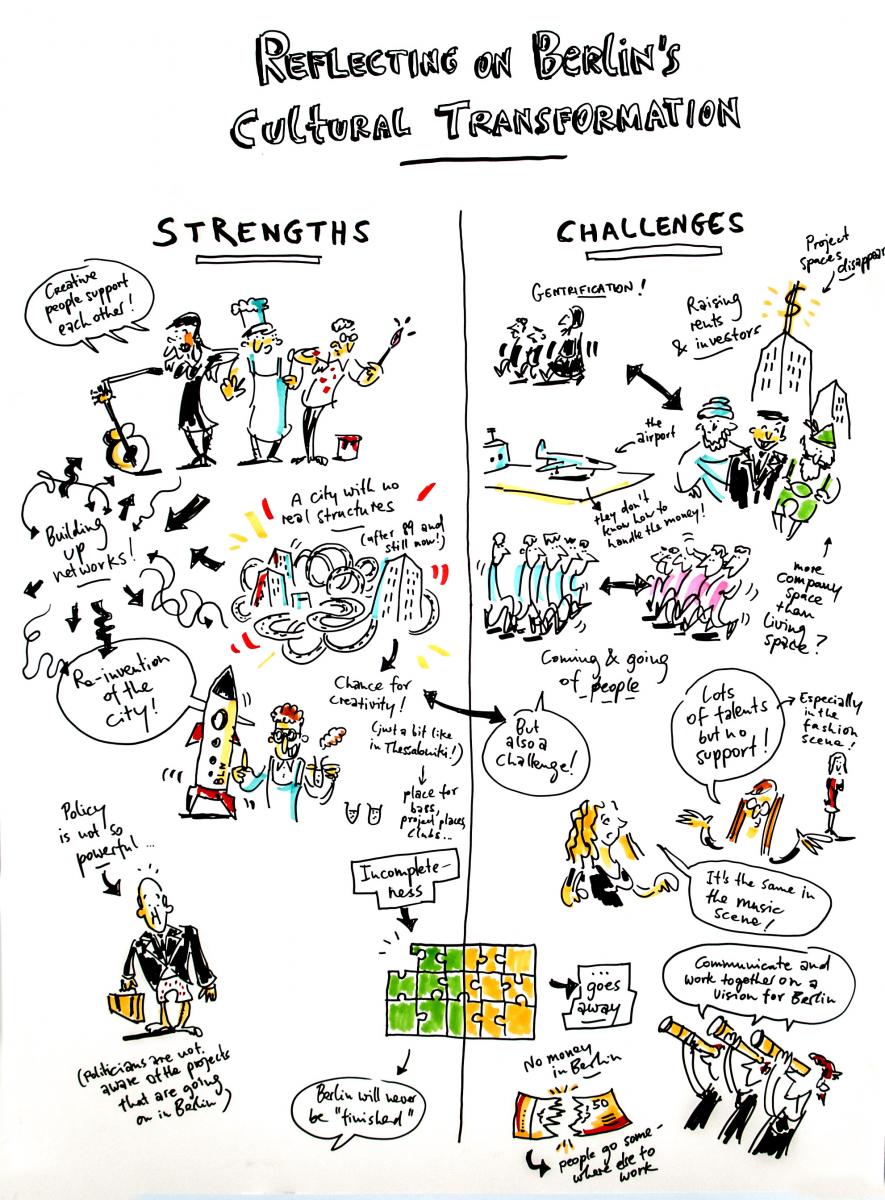 This dynamic between the “free scene” and the “mainstream” was present in other elements of the discussion. For example, there was broad agreement that the large-scale, city-led urban planning and development projects in the post-Wall period were largely unimaginative and not reflective of the rich creativity embedded in the city. In turn, there has been little city support over the years for innovative, bottom-up projects. However, guests commented that this dynamic is slowly shifting. For example, the Flussbad Berlin (Natural Swimming Pool) project to turn an underutilized canal off of the Spree River into a natural swimming pool recently received important financial and political support from the city and the national government to assess the feasibility of the concept.  Further, the unification of sustainability, creativity, and innovation exemplified in projects such as Flussbad Berlin, Markthalle Neun, The Factory, and Holzmarkt highlight an important new chapter in Berlin’s transformation.

Throughout the dinner there was an underlying theme of the implications of Berlin’s creative transformation for its future. The unique qualities that make Berlin a destination for young people, makers, innovators, and other creatives ushered in a period of rapid growth and economic development. The impacts of this growth range from escalating housing costs and rising rents for cultural facilities to rapidly changing demographics and real estate speculation. 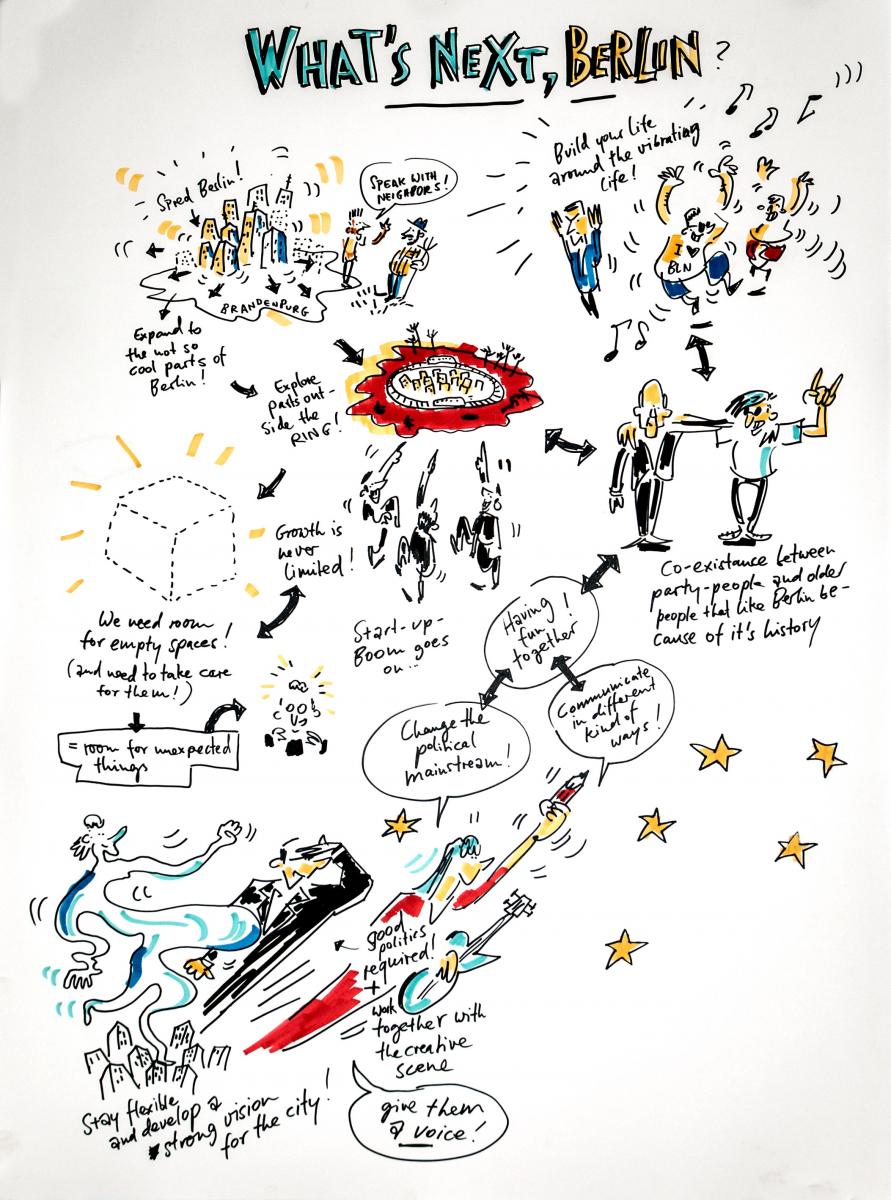 The reality of today’s Berlin led to a lively discussion of what’s next for the city. Some voiced the idea of engaging the edges of Berlin and Brandenburg with new creative projects. Others were eager to preserve space for creativity or to empower more bottom-up projects.  All were supportive of the need to strengthen cooperation between the creative scene and all levels of the political system, from neighborhood level officials to the highest levels of city hall. Notably, they recommended building up relationships and cooperation via creative events and activities and not through discussions in board rooms. The evening concluded with call from the group to forge a common vision for the city that will enable both political and civic leaders to steer in the next phase of Berlin’s creative transformation.