On December 1-2, 2017, The German Marshall Fund of the United States (GMF), in partnership with the Tokyo Foundation, organized the fifth Trilateral Forum Tokyo. This year’s Forum included participants from the Ministry of Foreign Affairs of Japan, European External Action Service, Ambassadors from several European embassies in Tokyo, U.S. Department of State, U.S. Pacific Command, scholars from prestigious universities and think tanks in the region, renowned journalists and business leaders.

The Honorable Shigeru Ishiba, member of the Liberal Democratic Party (LDP), delivered the Forum’s opening keynote address. The Japanese Minister of Defense, the Honorable Itsunori Onodera, delivered remarks and engaged in a Q&A with the audience on the second day of the Forum.

The Forum was hosted by the Delegation of the European Union to Japan.

See highlights from Twitter below and view the full conversation using #TFT5. Photos from the event are available here.

We had good EU/US cooperation on China on the trade front in the past; we still share concerns, US still happy to talk w/EU about China, but less willing to do something concrete about it #TFT5

Climate change after US withdrawal from Paris under trilateral (US-EU-Japan) discussion in Tokyo with another all-star panel. #TFT5 pic.twitter.com/vYjHdoPGAH

#TFT5 participant: Not talking enough about 1) Taiwan, 2) the breakdown of ASEAN, 3) how we strategically connect the Indian and Pacific Oceans, 4) connection between India and SE Asia. #EUJapanUS 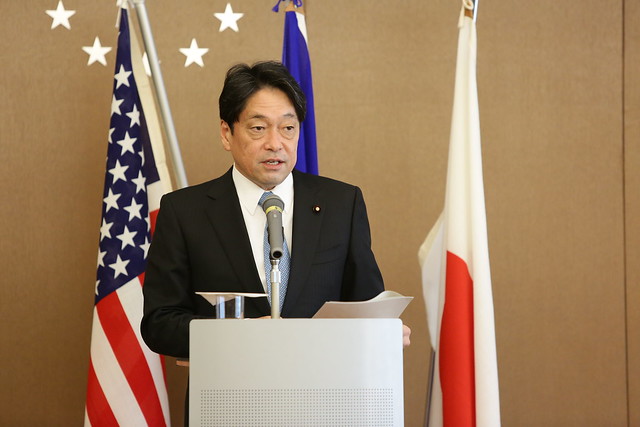 Senior Fellow and Senior Advisor to the President