Conflict over the Kurdish question is dominating Turkey’s political agenda again. The Kurdistan Workers Party (PKK) has been emboldened, on the one hand, by the gains of its sister party, the Democratic Union Party (PYD), in the Kurdish part of Syria and, on the other, Turkey’s deteriorating geopolitical position in Syria, particularly after Russia’s heavy military build-up and the Turkish–Russian feud over Turkey’s shooting down of the Russian jet. The PKK has become less compromising and more assertive. After terminating its two-and-half year long ceasefire with Turkey through the execution of two police officers on July 22, 2015, the PKK is now intensifying its fight against Turkey. This termination was aided in no small measure by the government’s lack of seriousness on the peace process.

On the other side, long-frustrated by the gap between its own and the PKK’s understanding of a solution and the PYD’s territorial expansion in the northern Syria, the Turkish government seized upon the attack as a chance to end the ceasefire and began to bomb PKK targets in Turkey and Iraq. On and off clashes soon morphed into low-intensity warfare as the PKK tried to replicate its Syria strategy in Turkey, bringing the fighting into the urban centers and laying siege to neighborhoods, towns, and districts.

The government responded to this by imposing curfews in many districts and cities, affecting the social, economic, and political lives of approximately 1.5 million people. As a result, Kurdish politics has consolidated around the PKK. This vicious cycle is unlikely to be broken unless there is a mutual accommodation between Turkey and the PKK on Syria and the Kurdish part of Turkey.

Causes for the Escalation

The PKK sees Turkey’s understanding of the Kurdish issue and its potential settlement as reductionist and unsophisticated. Turkey treats the Kurdish issue as an outgrowth of its democracy deficit and of the Kurdish region’s economic underdevelopment. In contrast, the PKK’s vision of a settlement essentially lies in the sharing of Turkey’s sovereignty between Turks and Kurds. The PKK desires to be the primary power in the Kurdish region. To that effect, the Democratic Society Organization (DTK), which serves as an umbrella organization for the various Kurdish parties and initiatives including the pro-Kurdish People’s Democratic Party (HDP), convened an extraordinary congress in Diyarbakir on December 27, 2015. While strongly supporting the PKK’s new urban warfare strategy, the congress produced a 14-point communique that requested a significant level of power devolution and sharing of sovereignty moving forward. However, this cannot happen in Turkey’s current, highly unitary political and administrative system. And the government has no intention of meeting the PKK’s demands.

In the meantime, the PKK regards the PYD’s territorial and administrative gains in the Kurdish part of Syria as one of its most significant achievements. PYD-led Kurdish self-rule areas were previously made up of three separate cantons: Jazira, Kobane, and Afrin. The capture of Tal Abiad, Syria, by the PYD’s armed forces in June created territorial contiguity between the Jazira and Kobane cantons. The only missing link for the creation of full territorial contiguity between Kurdish cantons was the area between Kobane and Afrin cantons. But Turkey has made this area a red line and threatened military intervention if the Syrian Kurds’ armed forces tried to take control of it. The PKK regards Turkey’s current stance as untenable. If the PKK is faced with a trade-off between the advancement of the Kurdish peace process in Turkey or entrenching its gains in Syria, it will choose the latter. It believes that the current situation in Syria provides it with a historical opportunity that may not be repeated. As for the peace process in Turkey, the thinking is there will always be a possibility for pushing the restart button. 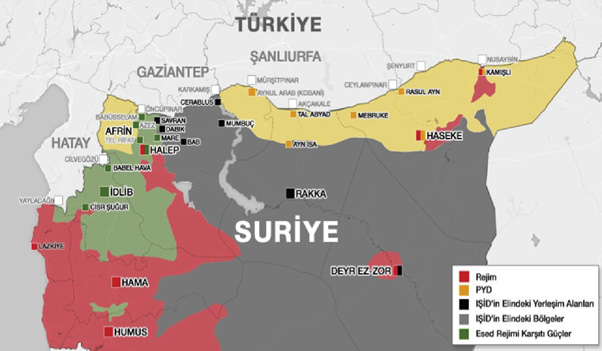 Turkey seems to misunderstand the evolution of the Kurdish movement’s political goals and its resoluteness in pursuing them. In the late 1990s and early 2000s, the Kurdish movement’s reference point on the advancement of the Kurdish rights in Turkey was the European Union’s norms. The EU’s Copenhagen Criteria, which was agreed upon in 1993 and which focuses on “the stability of institutions guaranteeing democracy, the rule of law, human rights, and respect for and protection of minorities,” was the discursive and political reference point for the Kurds. It was within this framework that the Kurdish movement made reference to the European Charter of Local Self-Government.

But this strategy seems to have changed dramatically. The fact that the EU’s norms essentially advocate for democratic, economic, and political progress and fall short of questioning the national government’s sovereignty, let alone paving the way for separatism, did not go down well with part of the Kurdish Movement, especially the PKK’s leadership. As a result, the context has changed for the PKK.

Kurdish gains in Syria and Iraq are now the PKK’s primary reference point. Both the activities and the rhetoric of the Kurdish movements clearly suggest this. The PKK has tried to replicate the experience of the PYD in the Kurdish part of Turkey by attempting to forcefully occupy some Kurdish neighborhoods, districts, and towns, declaring what it calls “democratic self-governance” and de facto wresting political authority over these areas from the central government.

The regional setting formed the backdrop to the PKK’s new political aspirations and the recent urban warfare. In turn, this new urban warfare is redrawing the lines within the Kurdish movement and affecting Kurdish society. This atmosphere of violence is increasing consolidation in Kurdish politics. All of its components, both armed and civilian, are adopting the same rhetoric and supporting the same policies. The trouble is that in times of violence, the most radical elements set the tone. Almost exclusively, the PKK has set the stage and now runs the show. This is the political part of the consolidation.

Consolidation also takes place at the societal level. As a result of this low intensity warfare, over 100,000 people have fled their homes. But unlike during the 1990s, when Kurds migrated to the western part of the country and mingled with wider Turkish society, domestically displaced people are now resettling in the relatively safer areas of the Kurdish southeast, which does not help the social integration of the country and contributes further to the emotional detachment of Kurds from Turkey.

But though some of these people are emotionally detached from Turkey, they are not necessarily moving closer to all the PKK’s positions. Interviews conducted by Al Jazeera Turk with the victims of this displacement clearly illustrate this.[1]