WHICH POWER IS THE MOST INFLUENTIAL GLOBALLY?

While the U.S. is clearly seen as most influential, its standing has not recovered from early in the pandemic. One-third to half of Europeans no longer think the U.S. is the leading global power.

The strongest perceptions of American influence abroad are in the United States (81%, an increase by 5 points from 2020), Canada (68%), and Spain (65%), the highest level in Europe. Roughly three out of five respondents in Turkey (63%), Sweden (63%), Poland (62%), and the UK (58%) see the U.S. as the most influential player, whereas this is only the case for just over half of the French (56%), Germans (55%), and Italians (51%). The first three months of the Biden administration have not affected French and German views of U.S. influence in the world, as these numbers are in line with the post-pandemic results of the 2020 survey (55% for France and 54% for Germany), which had fallen by about 10 points from the pre-pandemic numbers, to the advantage of China.

China consolidates its standing as the second most influential global power in the eyes of the Germans (22%, +2 points compared to 2020, post-coronavirus survey) and French (28%, no change compared to 2020, post-coronavirus), holding on to its post-pandemic bump. Alongside the French, the Dutch (27%) and the Italians (32%) are most likely to rank China as the most influential global player, in contrast to the relatively few Swedes (14%), Poles (15%), and Britons (15%) who see China as the leading power. Despite increasing Chinese engagement on the international stage, Europeans and North Americans do not believe China’s influence compares to the United States’.

Transatlantic partners see only modest influence for the EU and almost no global role for Russia. Respondents in the UK (22%), Sweden (19%), and Germany (18%) are most likely to choose the EU as the most influential player in global affairs, compared to only 12% of the respondents in the Netherlands, Spain, and Italy. While the French perception of the EU’s global influence has barely changed compared to the post-pandemic results in 2020 (-1 point from 15% in 2020), German respondents were slightly less likely to perceive the EU as the most influential actor than one year ago (18% compared to 21% in the 2020 post-coronavirus survey).

Very few respondents across all countries surveyed view Russia as a leading global player. In Turkey and Poland, Moscow’s status is highest, with 6% seeing it as most influential. 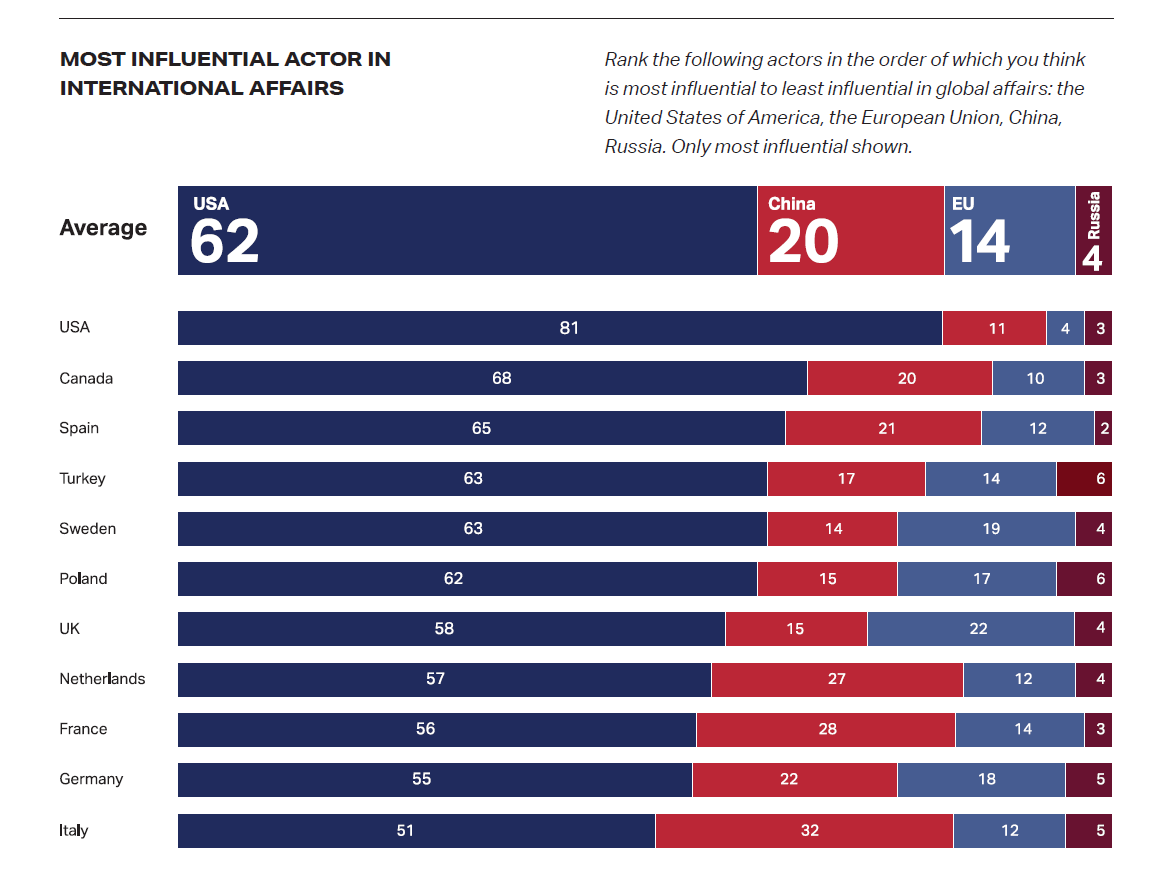 WHICH COUNTRY IS MOST INFLUENTIAL IN EUROPE?

Germany is overwhelmingly considered by European respondents to be the most influential country in Europe (60%), followed by the UK (19%) and France (7%). Americans and Canadians, in contrast, believe the UK is the leading European power. 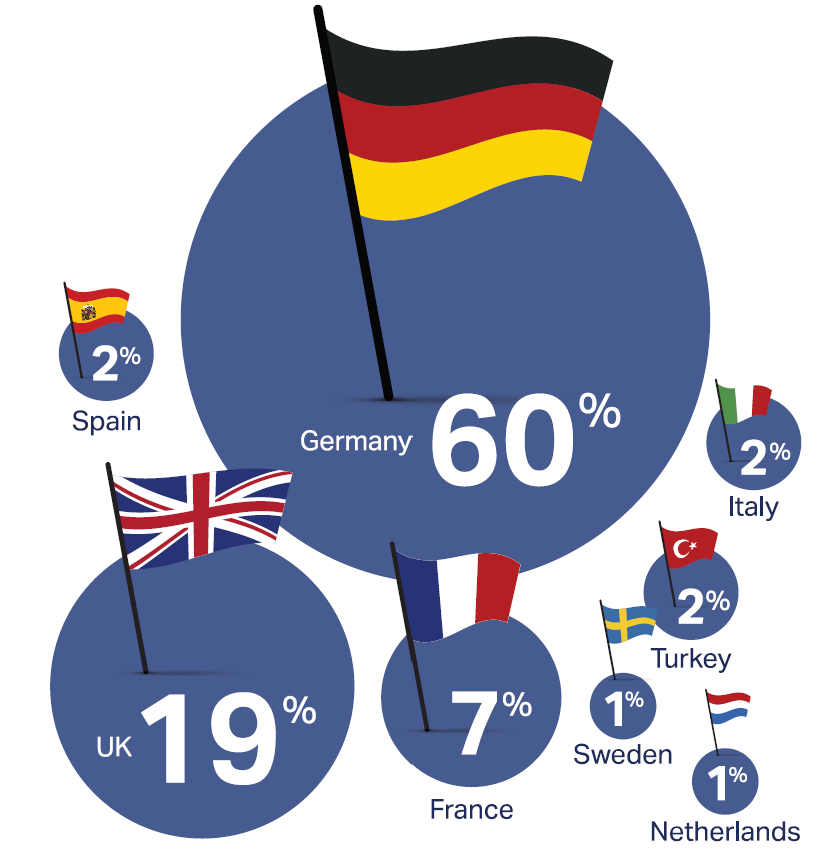 Respondents in the UK (47%) and Turkey (45%) are also somewhat less likely to think Germany is the most influential, and more likely to see a greater UK role: A quarter of Turks (25%) believe that the UK is the leading power in Europe, and more than one-third (36%) of the British respondents share this opinion.

However, French perceptions vary strongly across age groups. Young respondents (18-24) are twice as likely (36%) to see France as the most influential country in Europe, nearly at the same proportion as those who see Germany as Europe’s most influential (43%).

Germans’ perceptions of their country’s influence within Europe are consistent across all age groups, but do vary according to political affiliation. For those respondents who indicated party preference, CDU/CSU and Green Party members are most likely to say that Germany is Europe’s leader (each 80%). In contrast only 54% of supporters of the far-right AfD believe Germany is the most influential country in Europe. 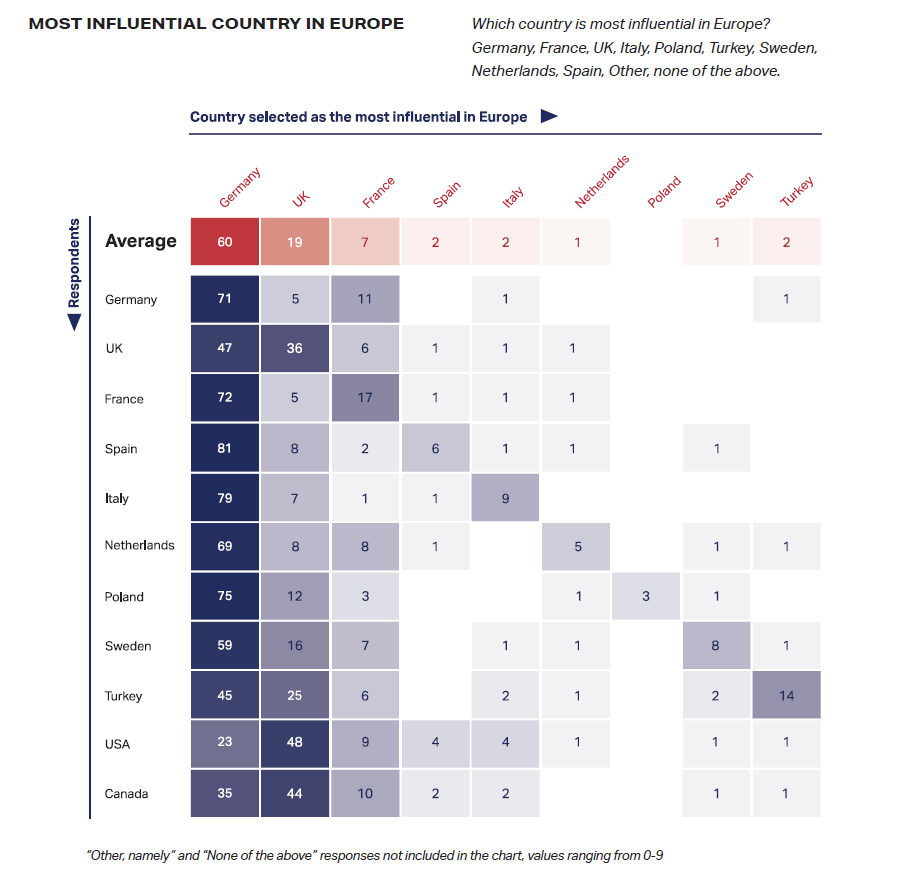 WHICH COUNTRY IS A RELIABLE PARTNER?

On average, Canada is viewed as the most reliable partner across all countries surveyed, followed by Sweden and Germany. Views of U.S. reliability vary across Europe, ranging from 76% in Poland to a strikingly low 51% in Germany.

Despite the various challenges impacting the transatlantic community, most of the countries surveyed are seen as quite reliable partners. The most trust is placed in Canada (75%), Germany (73%), and Sweden (73%) while Poland and Turkey are seen as least reliable on average (45% and 23% respectively). Perceptions of U.S. reliability are mixed across Europe, and lowest in Germany and Turkey. Among EU member states, the Poles have the most trust in U.S. reliability (76%), while the Germans have the lowest (51%). Similarly, U.S. citizens consider their European partners to be reliable (between 57% and 68% for the different EU countries, 69% for the EU). From the U.S. perspective, the most trusted EU allies are France and Germany (both 68%), followed by Sweden (66%) and the Netherlands (64%). 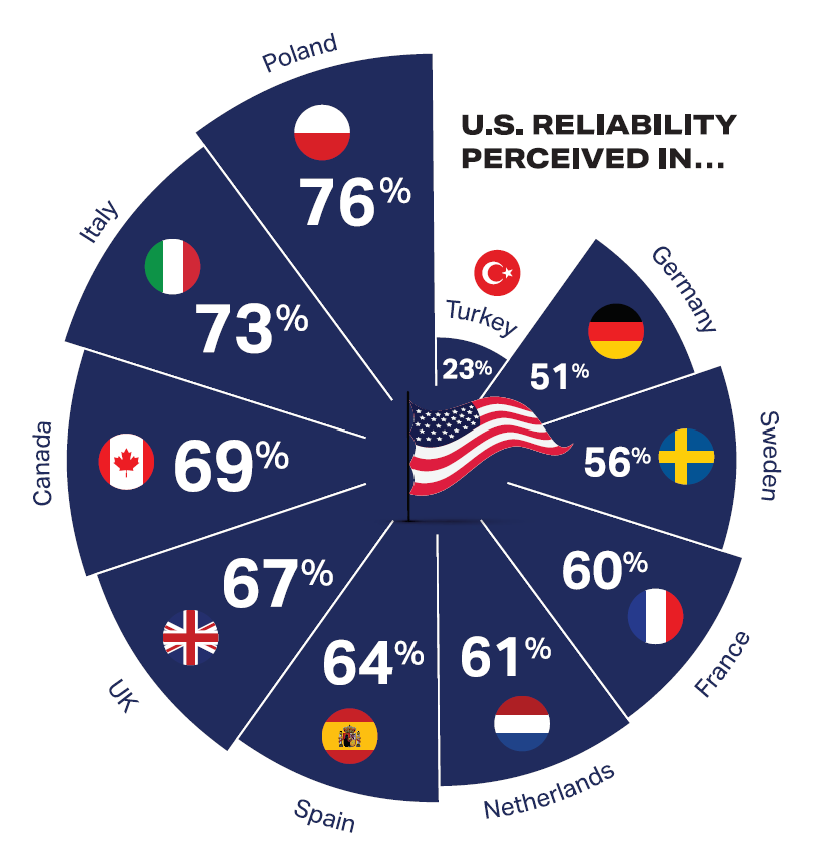 Germany is seen as the most reliable partner in five of the 11 countries: France, Turkey, Spain, the Netherlands, and Sweden. While over two-thirds of Poles view their European and North American partners as reliable, the perception is not reciprocated (on average, less than half of all respondents say Poland is reliable, and less than one-third of Germans and Dutch). Turkey is trusted even less: Two out of five Americans (42%) and almost two-thirds of EU member states’ respondents say Turkey is unreliable (76% in Germany and the Netherlands, 74% in Sweden, 73% in Italy, 72% in France). The Turks are also particularly skeptical of their partners, with only half trusting their most trusted partner (Germany, 54%) and around one-quarter trusting France (26%) and the United States (23%).

Generational gaps are prominent but differ across most countries surveyed. Notably, the youngest American respondents find EU countries less reliable than their older compatriots do, especially Americans age 55 and older. Some of the most notable examples include Americans’ perceptions of the Netherlands (44% of the youngest vs. 79% of 65+ respondents), Sweden (49% vs. 80% for 55+), and Germany (53% vs. 79% for 65+). Views of cross-country reliability within EU countries also experience a similar generational divide, with more older respondents trusting other EU member states than younger respondents, especially in the cases of France, Germany, and the UK.

The European Union receives mixed reviews from non-EU member states. While Canada and the U.S. view the EU as a reliable partner (75% and 69% respectively), only half of Britons and 39% of Turks agree. 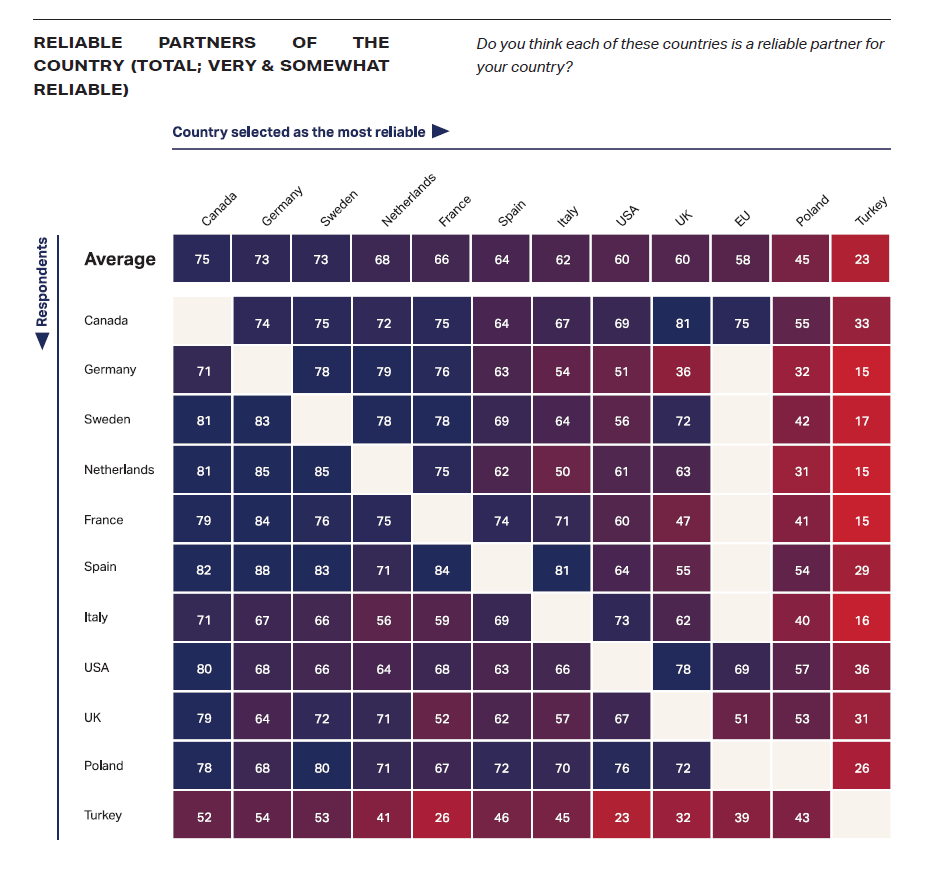 WHAT ARE THE MOST IMPORTANT ISSUES FOR TRANSATLANTIC COOPERATION?

Overall, respondents put global health and climate change almost equally at the top of the transatlantic cooperation agenda, followed closely by trade and the fight against terrorism.

As populations across the world continue to battle the coronavirus pandemic, respondents from seven of the 11 countries surveyed rank global health as the number one issue for transatlantic cooperation to tackle. Yet, when asked about their top three priorities, climate change and global health are on the same level (37% and 36% respectively). In both Germany and Sweden, respondents prioritize climate change over global health (an almost 20 point difference). Respondents in the UK, Germany (both 37%), and Canada (35%) see trade as particularly important, while nearly half of French ones prioritize the fight against terrorism (46%). Despite disparities among countries, overall the fight against terrorism (32%), trade (31%), and protection of human rights (29%) rank close behind the top items for transatlantic cooperation. 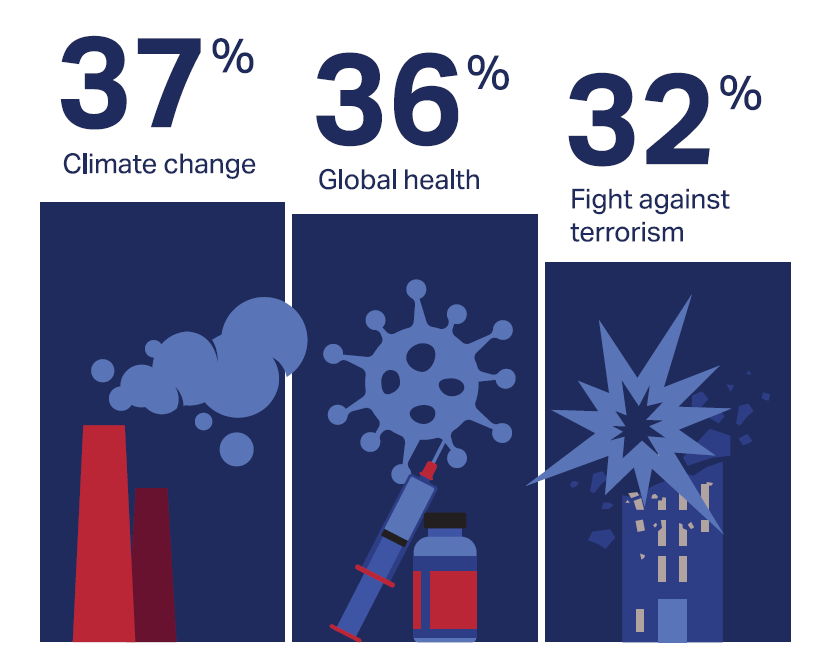 In Poland and Turkey, climate change does not make it into the top three, with just over a quarter of Poles and Turks prioritizing it for transatlantic cooperation. Americans have a more varied view of the priority issues to be dealt with among transatlantic allies, with a nearly four-way tie between global health (31%), climate change (29%), the fight against terrorism (28%), and the protection of human rights (28%). Global health ranked highest in Italy (49%), Turkey (43%), and Spain (43%), with the lowest proportions in France (23%), Germany (29%), and Sweden (30%). The French find the fight against terrorism to be the most important challenge (46%), while the Swedes rank it second at 38%, and exactly a third of Turks and Britons indicate it among their top three priorities (33%). Across all countries surveyed, transatlantic cooperation vis-à-vis Russia and Iran ranks the lowest on the list of most important issues.

An age difference is noticeable around terrorism, with older respondents much more likely to prioritize terrorism on the transatlantic agenda than younger respondents. In the United States, while 40% of respondents over 55 see combating terrorism as one of the top three priorities, only 17% of 18-24-year-olds do. The trend is similar in France (59% vs. 31%), Sweden (46% vs. 28%), and Italy (37% vs. 15%).

Furthermore, divergences persist along predictable political lines in Western European countries. Respondents aligned with far-right parties are more likely to worry about migration (41% among the Dutch PVV) and terrorism (42% among the French Rassemblement National, 41% among the German AfD), and supporters of pro-business parties are more likely to prioritize trade (38% among the Dutch VVD, 57% among the German FDP). Moreover, Green Party supporters place climate change cooperation at the top of the transatlantic agenda (65% in Germany, 61% in Canada, 57% in the Netherlands, 54% in France).

In the United States, a partisan divide is evident. A much greater proportion of Democrats chose climate change (36%) and protection of human rights (33%) than Republicans (17% and 20% respectively). Conversely, more Republicans prioritize migration (16% to 7% of Democrats). 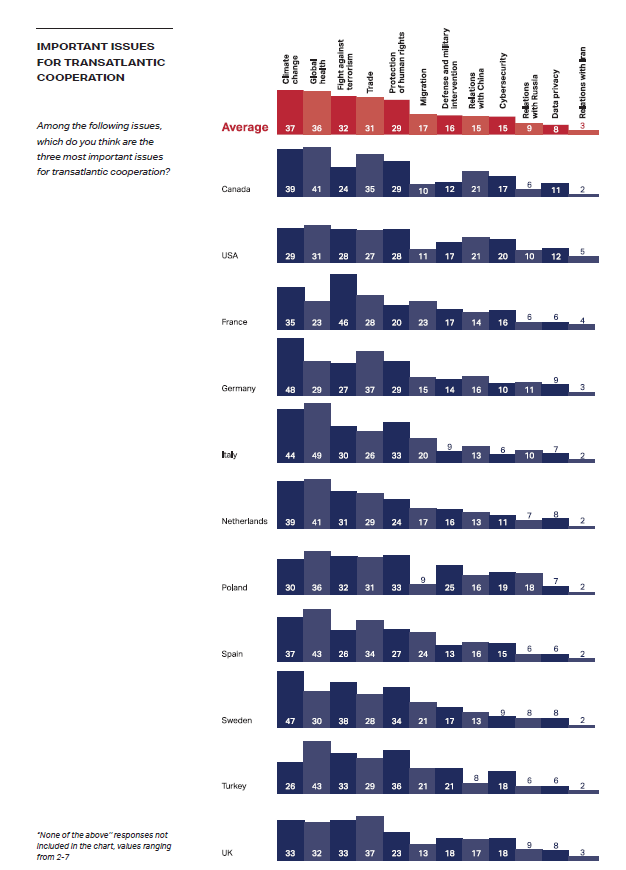 HOW STRONG IS YOUR COUNTRY’S DEMOCRACY?

Overall a plurality believe the state of democracy in their country is somewhat good. However, Italian, Polish, and Turkish respondents have a more negative outlook, and a plurality of Turks believe that their democracy is in danger. 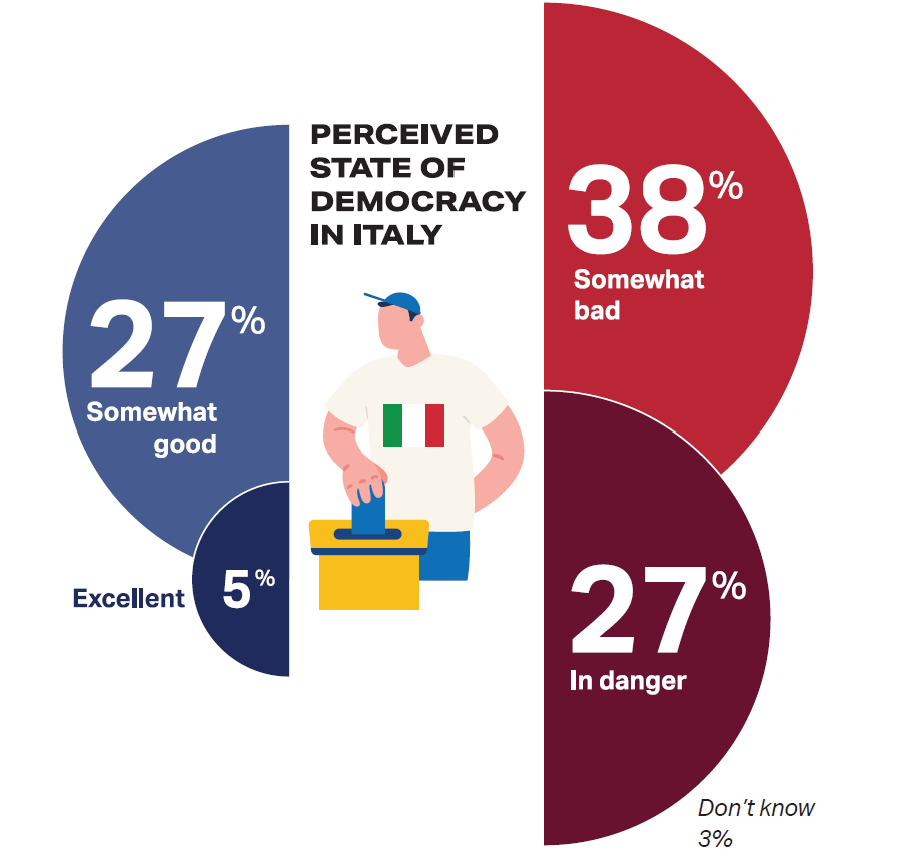 In the aftermath of the 2020 U.S. presidential election, a majority of Americans have positive views of the state of their democracy (55%). Interestingly, despite a narrow majority being satisfied in general, Americans, alongside Canadians, are most likely to think that their democracy is in an excellent state (21% in both countries).

Across all countries, far-right supporters think their democracy is in trouble (either somewhat bad or in danger), including those of the AfD in Germany (79%), the Rassemblement National in France (71%), and the Sweden Democrats (45%). As might be expected given the most recent hotly contended election, a partisan divide appears in the United States: 66% of Democrat respondents indicate an overall positive view of American democracy, compared to 49% of Republicans. 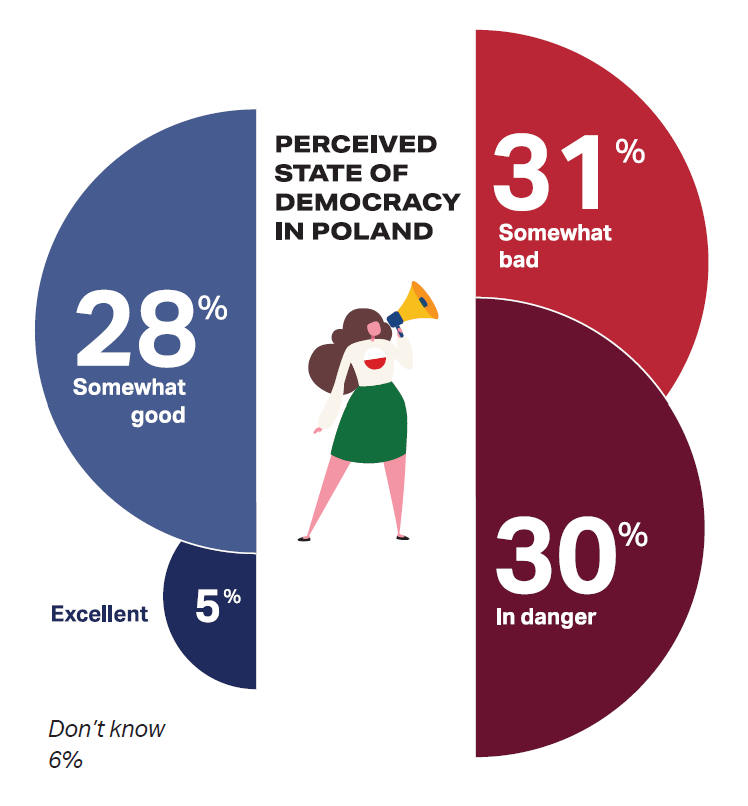 Views of democracy in Germany are mixed both politically and geographically. In eastern Germany, only 48% of respondents have a positive view of the state of German democracy, which is significantly lower than in the north (62%), south (64%), and west (67%) of the country. While CDU/CSU (85%), SPD (83%), and Green voters (76%) are satisfied with the state of German democracy, only 58% of Left voters, 49% of FDP voters, and 17% of AfD voters share this positive assessment. 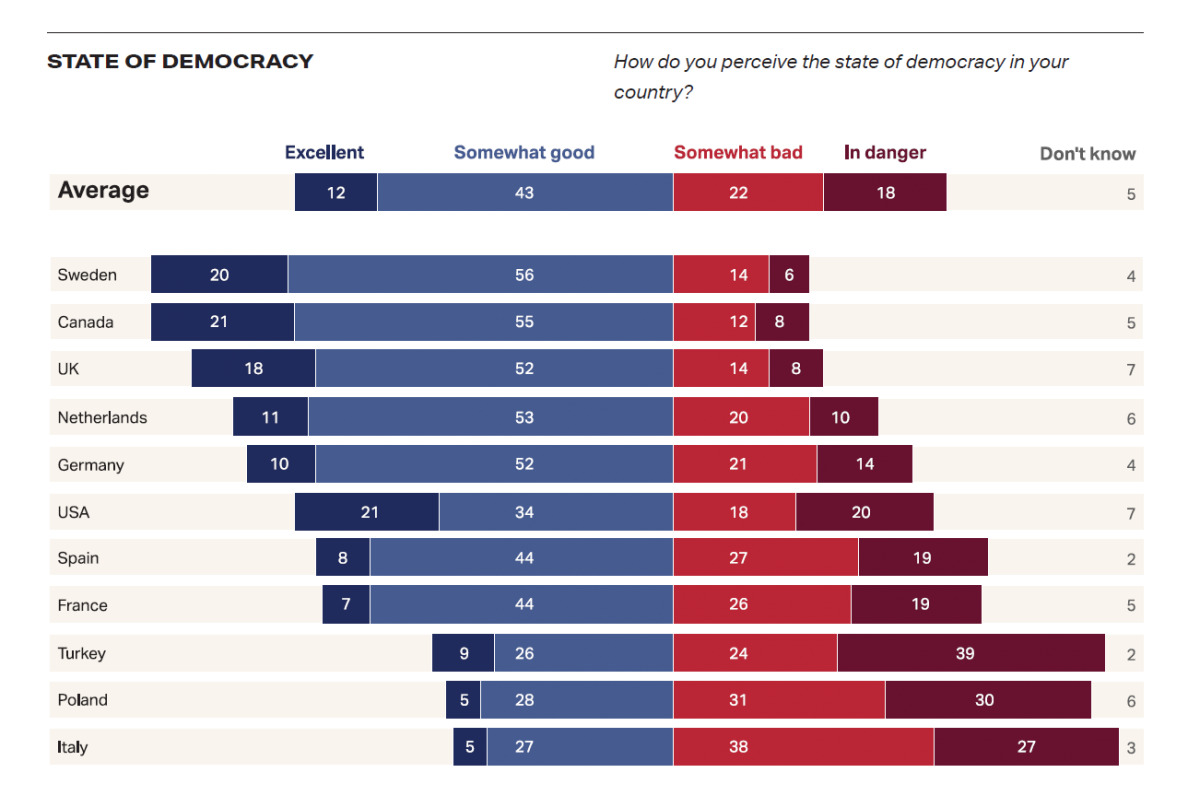