More Ambition, Please! Toward a New Agreement Between Germany and the United States 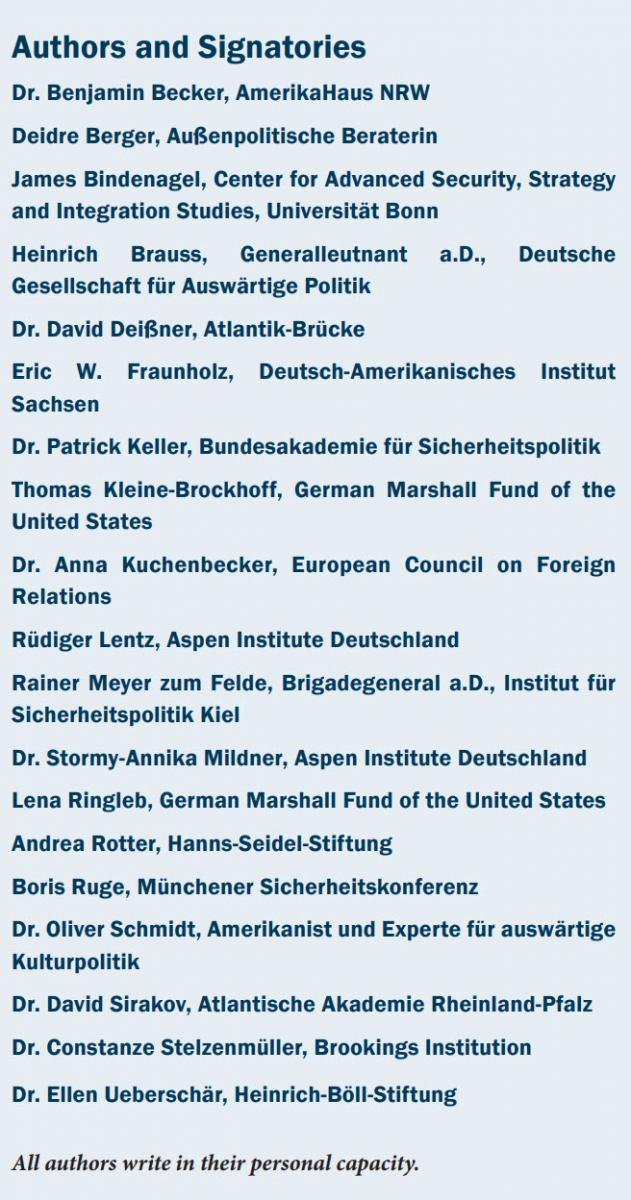 Germany must seize the opportunity of the start of Joe Biden’s presidency to repair and realign the transatlantic relationship and to reach a new consensus with the United States.

To do so, Germany needs leadership, political will, ideas, and a plan, all based on its vital interest in ensuring that the United States remains a European power.

The proposal here for a new consensus is driven by the will to think beyond one legislative term, to act in a bipartisan way, and to harness the energy of young people and diverse minorities to shape the future of the transatlantic alliance. This new consensus focuses on six policy areas: the coronavirus pandemic, climate, NATO, China, technology, and trade.

A New Beginning: Why and How?

Joe Biden’s presidency offers a unique opportunity to overcome the crisis and to revive and preserve the Western alliance long past the next four years. The German government should immediately approach the incoming administration with initiatives to reach a new consensus with the United States.

A new consensus must confirm shared goals and necessary implementing measures. Germany and the United States will need to accept their responsibility for the cohesion and creative power of the community of liberal democracies. In particular, they must agree that a new consensus must be reached, especially regarding the United States role and presence in Europe and Germany, aiming to fortify the alliance well beyond the new president’s term in office. Common solutions are urgently needed to combat the scourges on humanity caused by the coronavirus pandemic and global warming. This collaboration on the challenges of our time should attract a new generation and new civil society actors to the transatlantic relationship.

The moment to act is now. Germany’s government needs leadership, political will, ideas, and a plan—all rooted in the country’s vital interest in the United States remaining a European power.

This interest is not set only for the short term because of Germany’s limited military means; even together with its European partners, it will only be able to defend itself independently of the United States in the distant future. Rather, it is rooted in Washington’s often overlooked roles as a guarantor of European unity and peace.

After centuries of European wars, the most profound distrust of European states was frequently directed at their neighbors. Only the United States’ presence and engagement as a European power have managed to limit geopolitical conflict on the European continent. This engagement remains a condition for European integration.

No country has benefited more from the United States’ role in Europe than Germany. Because of its size, history, and economic power, the country draws more neighborly scrutiny, interest, and mistrust than any other in Europe. The United States’ role as a re-insurer of Europe’s stability and unity is the essential geostrategic foundation of Germany’s postwar success. The United States’ opening up to Europe helps guarantee that the “German question” remains closed.

Germany—together with the Biden administration and with its European partners—will need to focus on redefining and reinforcing the United States’ long-term role in Europe.

President Donald Trump’s tactic of exacerbating European divisions and undermining European integration violated the inner core of Germany’s vital national interests. In essence, he undermined the project of European integration. Despite all appeals for European unity in response to Trump, the opposite has happened. The cracks across the continent only deepened without the United States’ pacifying and unifying influence. Europe’s bitter lesson from Trump’s presidency is the rediscovery of its deep divisions and fragility.

That is why Germany—together with the Biden administration and with its European partners— will need to focus on redefining and reinforcing the United States’ long-term role in Europe. This process will take place within a dramatically changed geopolitical environment. Germany, like all of Europe, will need to learn to live with the reality that the world’s strategic center has moved to East Asia. After 500 years, the center of the world is no longer the European continent. Hence, the United States’ priority will be Asia and its resources will not be directed primarily to Europe. There is no plausible scenario of a Europe’s future in which its countries—first and foremost Germany—do not have to do significantly more to ensure the continent’s security and stability.

European posture, European countries can count on the incoming administration to stop administering such modifications in an intentionally disruptive fashion, without much strategic reasoning, and in a tone that resembles military commands. Now, Germany and Europe should develop and balance a new transatlantic set of tasks and responsibilities together with the new administration.

In the long run, the United States can only maintain its role as a global power through close cooperation with a stable, democratic, prosperous Europe capable of acting collectively. Similarly, Europe can only maintain and strengthen its collective ability when working with a transatlantic partner in place. Hence, devotion to European integration and transatlantic engagement will continue to be two sides of the same coin.

The German government could choose the easy path by assuming a wait-and-see attitude toward cooperation. It would simply wait for the new president to present ideas and plans. This attitude would at least not seem to be harmful since much of Biden’s agenda sounds as if it had been conceived in Berlin: reentering and strengthening the Paris Climate Agreement, starting arms-control initiatives, resuming negotiations with Iran, and making the defense of democracy once again a focus of foreign policy.

But a wait-and-see-attitude is simply not enough. Germany has to be active and innovative. In cooperation with its European partners, it should quickly present a package of ideas aimed at building a new German-U.S. consensus in key areas of the transatlantic future. The time window for such conversations is alarmingly small. It will take Biden months to appoint most of his essential staff members, some of whom will have to be confirmed by the Senate. Meanwhile, the German elections campaign will begin. Next year, France will hold a presidential election and the United States congressional ones. Between all of these events, openings must be found and concrete agreements finalized.

Germany’s package of ideas should include five topics important for future cooperation with the United States: climate, NATO, China, trade, and technology.