In 2018, GMF elected to focus on the theme of Ideas to Action by supporting projects and follow-up activities generated by BUILD participants from all four years. The initiative includes specific GMF-led workshops and collaborations with BUILD partners; in addition, we selected individual projects through a competitive “Call for Collaboration” that solicited proposals for mini-grants, technical assistance, and access to GMF experts to implement ideas in local communities that were generated as a result of BUILD 2014–2017. See a summary of activity by BUILD theme and year of inspiration:

A breakout session at BUILD 2017 explored the reuse scenarios of the decommissioned Conners Creek Power Plant, a 400,000 square iconic structure on 75 acres of underutilized industrial waterfront property. Leveraging an international network of 42 policymakers, architects, and urban planners, this BUILD Lab session reimagined one particular space in the Conners Creek Power Plant and brainstormed onsite tactical preservation strategies that could spur further development throughout the main buildings and the site in general. BUILD participants Jaqueline Taylor (Detroit) and Mary

Dellenbaugh-Losse (Berlin) intend to expand on the success of the BUILD Lab and the “Tactical Preservation” approach by promoting a transatlantic knowledge transfer of innovative practices that temporarily and partially reuse vacant buildings. The main goal of this pilot project is to produce an English language publication and online database of good practices with detailed information about their transferability to inform not only the work in Detroit but other transatlantic cities with vacant or underutilized assets.

Both Stuttgart and the Washington, DC region have been featured at previous editions of BUILD through plenary speakers, case studies, and delegations of participants. This project builds on a multi-year foundation of bi-lateral transatlantic engagement between the Northern Virginia and Greater Stuttgart regions by supporting a peer exchange from September 29 to October 30, 2018. During this time, the Northern Virginia Regional Commission (NVRC) will host 14 mayors and 3 technical staff from the Verband Region Stuttgart (“Verband”). The officials from Stuttgart will study the Washington region’s work with sustainable waterfront, airport redevelopment, mobile source emissions controls, monitoring policies, affordable housing, and electric/autonomous car infrastructure planning. The partnership between the two regional councils is characterized by outcomes — not events — emanating from the transfer and application of policy and technical innovations between Stuttgart and Northern Virginia. From climate mitigation planning in Arlington County, watershed restoration in the City of Falls Church, to workforce training in Fairfax County — the partnership is about results that have improved the economy, ecology, and communities of both regions.

Fair Saturday is a global cultural movement that started in Bilbao, Spain that promotes the organization of cultural and artistic activities every last Saturday of November where participants collaborate with a charity chosen by artists and cultural entities; Fair Saturday was featured in the 2016 edition of BUILD and founder, Jordi Albareda Ureta, also shared the success of the movement at BUILD 2017 in Detroit. The project, BUILDing Fair, is designed to support the further adoption of the Fair Saturday model in the Washington, DC region, including the cities of Takoma Park, Maryland; Silver Spring, Maryland; and Washington, DC. The international expansion of the project will foster transatlantic relations through a shared philosophy of social impact that provokes a global reflection of the importance of art and culture in the construction of emphatic and inclusive cities. The goal of the project is to expose leaders from the DC region to Fair Saturday and discuss opportunities for implementation.

Enabling long-lasting changes in communities requires both leadership and tools for long-term actions. While the context for local government and philanthropic collaboration is significantly different on either side of the Atlantic, there is an opportunity to share practices and look to new models for inspiration. One such model is the concept of a revolving loan fund, which is a common practice in U.S. cities, but has not been tested in Romania. In this project, BUILD participants, Anamaria Vrabie (Cluj-Napoca, Romania) and Brian Kennedy (Pittsburgh, Pennsylvania) will collaborate to produce a common guidance on how to set up a revolving fund, through the organization of an exchange of practices between the cities of Pittsburgh, Boston and Cluj-Napoca, which will take place at the Cluj 2.1 Urban Dialogues between October 31 to November 3, 2018 in Cluj-Napoca (Romania).

GMF and the European Foundation Centre (EFC) convened a group of transatlantic stakeholders to further develop the ideas and concepts on how to make cross-sector partnerships more effective and transformative in advancing sustainability, resiliency, and inclusive growth in cities of all types. The workshop in Brussels was the third in a series that included sessions at the Funder’s Forum on Sustainable Cities (FFSC) workshop in Copenhagen (October 2017) and BUILD 2017 in Detroit (November 2017). Previous workshops focused on the challenges and opportunities for cross-sector partnerships (FFSC), and then proceeded to brainstorm and design concepts to improve cross-sector partnerships (BUILD). The Brussels workshop was the first time that FFSC and BUILD network members who participated in the prior workshops convened to work together on the next step in developing the concepts. Specifically, they prioritized the concepts ideated at BUILD. Then the group developed the top four ideas further and pitched their processes, structures, and tools to the rest of the group. The goal of the workshop was to create a set of projects to pilot through further EFC-GMF collaboration in the coming year. 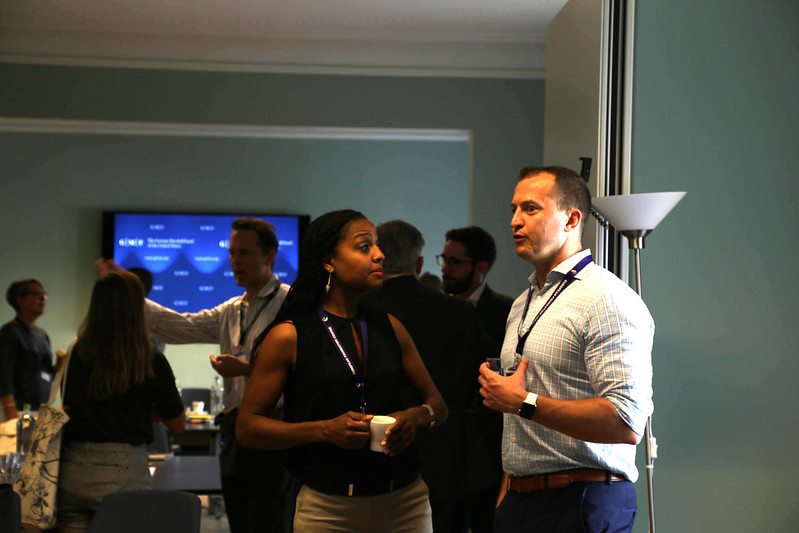 The Future of Multigenerational Housing in Existing Communities:  A Transatlantic Dialogue. June 14–15, 2018 in Washington, DC (BUILD 2017)

At BUILD 2017, GMF partnered with AARP on a breakout session entitled, Multigenerational Cities: Aging as Innovation. This session brought together a cross sector group to discuss the importance of building multigenerational cities, and to share thoughts on the policies, plans, and practices that contribute to age-friendly cities. Two policy themes that emerged as priorities for further transatlantic dialogue were housing and mobility. As a follow-up to BUILD, GMF and AARP convened a small group of transatlantic experts from our networks to explore a specific dimension of multi-generational housing in transatlantic cities: how can the existing housing stock in established communities be adapted with new housing models and technological innovations, as an important part of the solution to the affordable and accessible housing challenges faced in many cities. Twelve transatlantic experts met over two days in Washington to discuss new housing models (such as shared housing, co-housing and accessory dwelling units) and technological innovations (such as smart home systems and wearable devices) which offer the opportunity to connect multiple generations, reduce isolation, and improve integration. The group worked to identify specific policies, practices and regulation that would enable, as well as the principles for transferability to both the U.S. and European contexts. The outcomes from the workshop will inform a paper that GMF and AARP will release in the fall of 2018.

BUILD 2017’s breakout, How Autonomous Vehicles Can Improve Your (Urban) Life, began the conversation on how can AV support city priorities around mobility, climate change, equity, and safety; and what approaches can develop a city AV policy to support these goals. After BUILD 2017, GMF continued the conversation through two additional events with one in Brussels, Belgium (December 2017) and the other in Washington, DC (May 2018). These discussions focused on the experiences of the cities as case studies, with broadly applicable lessons for other transatlantic cities. Urban mobility technology across transatlantic cities is evolving at the fastest pace in a century. A range of new private services give residents more options to travel than ever before, but they also complicate the roles of public leaders — and they raise critical questions about equity, congestion, and data privacy. Such questions will become even more complex in the coming years as autonomous technologies become more commonly used. GMF is using the inputs from these workshops to craft a new initiative to engage American and European leaders on the specific opportunities and challenges posed by new mobility services and autonomous mobility. 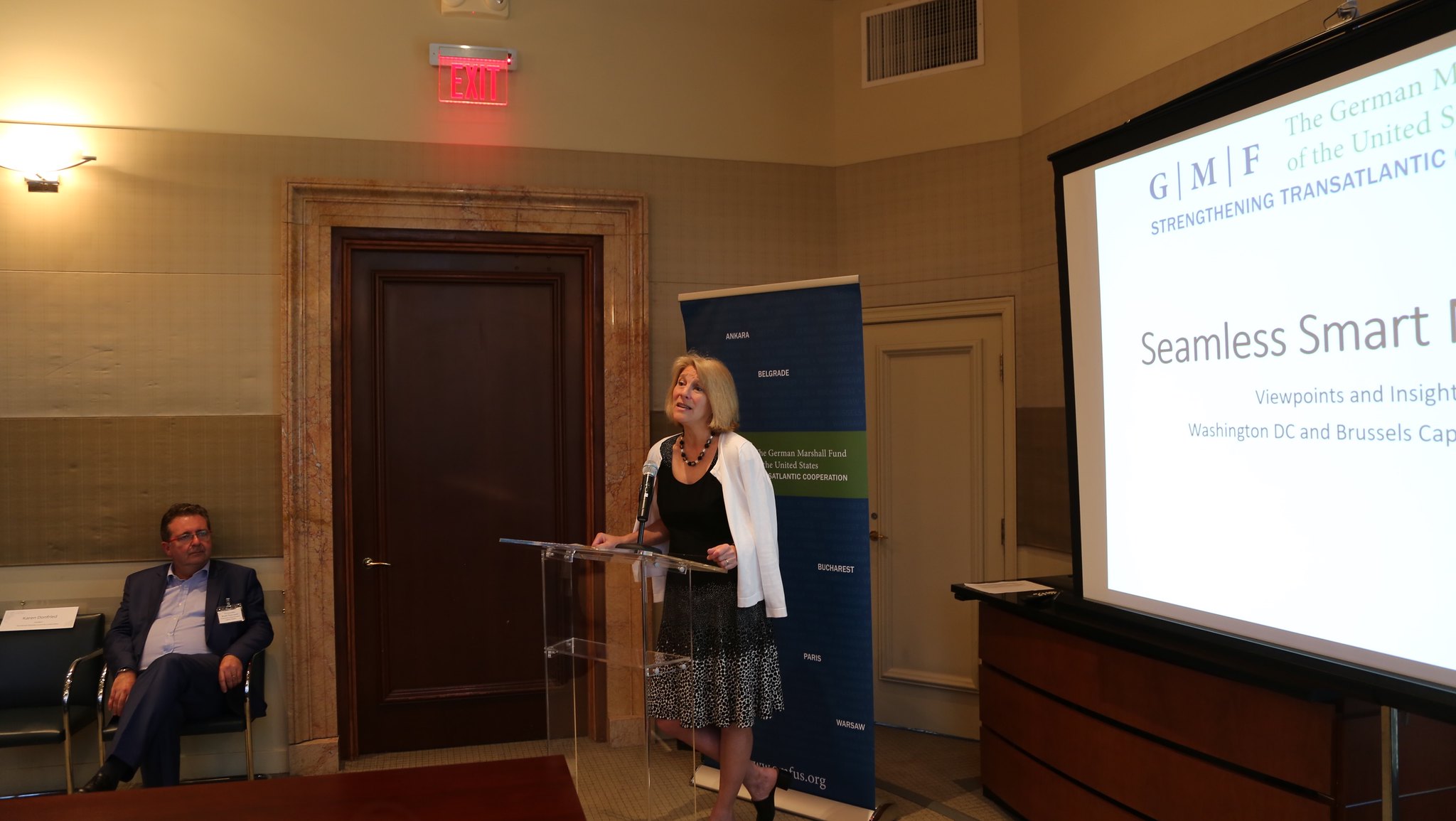