Even before a global pandemic hit, the Bulletin of Atomic Scientists announced that the Doomsday Clock had advanced for the first time ever to 100 seconds before midnight. The Bulletin cited “information warfare” as a “threat multiplier” that is reducing trust and corrupting the information ecosystem needed for democratic debate. Now the World Health Organization is warning of an “infodemic” of widespread conspiracy theories about the coronavirus, and disinformation has already been evident in the lead-up to the 2020 presidential election. Despite a clear and present danger, it is evident that our institutions are not nearly ready—neither for foreign nor domestic disinformation campaigns.

While U.S. intelligence officials have repeatedly warned lawmakers that foreign interference in U.S. elections will continue, the giant platforms that have become the new media gatekeepers—Facebook/Instagram, Twitter, and Google/YouTube—have largely been left to choose their own paths. And though the platforms say 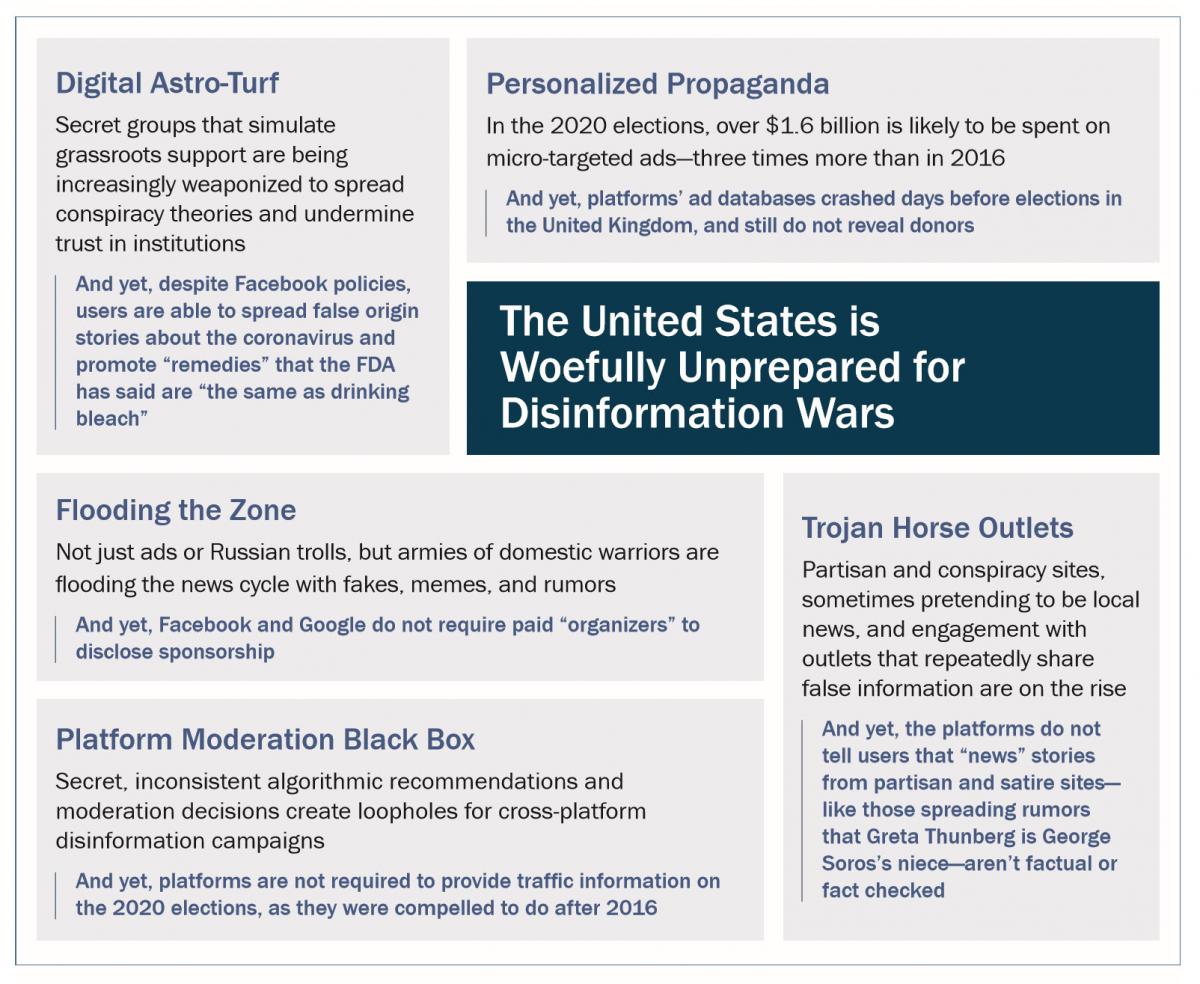 they want to address election disinformation, their own rules are inconsistently applied and underenforced, leaving it to fact-checkers, journalists, and researchers to expose rule breaking as best they can. According to our research with NewsGuard, among outlets that repeatedly share false content, eight of the top 10 most engaged-with sites are running coronavirus stories.

Eight out of the top ten sites promoting false information were found to be running disinformation about coronavirus, with headlines such as “STUDY: 26 Chinese Herbs Have a ‘High Probability’ of Preventing Coronavirus Infection” and “Why coronavirus is a punishment from God”1

Too often, the only alternative proposed to today’s laissez-faire approach would increase government control over content. This false choice—between allowing platforms or government to act as censor—has hobbled the policy debate. A new approach should empower users. Our approach is rooted in an understanding that digital information platforms are our new media gatekeepers yet have none of the obligations developed over time for our old gatekeepers: obligations to minimize user manipulation, boost public interest journalism, and promote democratic debate.

The new digital media policy roadmap we layout would steer clear of vague rules that empower governments to define “good” or “bad” content and would instead focus on updating offline protections, fostering user choice, amplifying the signal of independent news, supporting civic information, and holding platforms accountable for shared, unambiguous, and transparent rules. This policy package—tailored with input from stakeholders and sufficiently agile to account for evolving technology—would close the loopholes that allow bad actors to engage in online information warfare using the largest platforms, and it would do so without restricting free expression or stymieing innovation.