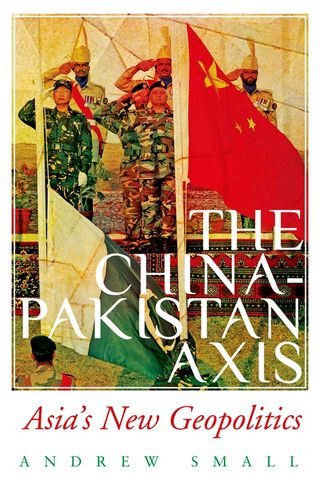 The China-Pakistan axis plays a central role in Asia's geopolitics, from India's rise to the prospects for a post-American Afghanistan, from the threat of nuclear terrorism to the continent's new map of mines, ports and pipelines. China is Pakistan's great economic hope and its most trusted military partner. Pakistan lies at the heart of China's geostrategic ambitions, from its take-off as a global naval power to its grand plans for a new silk road connecting the energy fields of the Middle East and the markets of Europe to the mega-cities of East Asia. Yet Pakistan is also the battleground for China's encounters with Islamic militancy, the country more than any other where China's rise has turned it into a target.

GMF Expert Andrew Small dives deep into this relationship with his new book, "The China-Pakistan Axis: Asia’s New Geopolitics" and is the first full-length study of this secretive relationship to have been published since the 1970's.

For decades, each side has been the other's only "all-weather friend", but the relationship is still little understood. The wildest claims about it are widely believed, while many of its most dramatic developments remain closely-guarded secrets. This book explains the ramifications of Sino-Pakistani ties for the West, for India, for Afghanistan, and for Asia as a whole. It tells the stories behind some of the relationship's most sensitive aspects, including Beijing's support for Pakistan's nuclear program, China's dealings with the Taliban, and the Chinese military's planning for crises in Pakistan. From China's involvement in South Asia's wars to the Obama administration's efforts to secure Chinese cooperation in stabilizing the region, it traces the dilemmas Beijing increasingly faces between pursuing its strategic rivalry with India and the United States, and the imperative to address a terrorist threat that has become one of the gravest dangers to China's internal stability.

The book is available today from Oxford University Press (US), Hurst (UK), and Amazon (Kindle).

Hear Small share the challenges of conducting research around one of the most tightly held secrets in China in this podcast.

Highlights of the book include:

Andrew Small is a transatlantic fellow with GMF's Asia program, which he has helped lead since 2006. His research focuses on U.S.-China relations, EU-China relations, Chinese policy in South and South-West Asia, and China's role in "problem" and fragile states. He was based in GMF’s Brussels office for five years, where he established the Asia program and the Stockholm China Forum, GMF's biannual China policy conference.

He previously worked as the director of the Foreign Policy Centre's Beijing office, as a visiting fellow at the Chinese Academy of Social Sciences, and was an ESU scholar in the office of Senator Edward M. Kennedy. He has testified before the U.S.-China Economic and Security Review Commission and both the Foreign Affairs Committee and the Development Committee of the European Parliament. His articles and papers have been published in Foreign Affairs, the Washington Quarterly, The New York Times, and the International Herald Tribune as well as many other journals, magazines and newspapers.

Small was educated at Balliol College, University of Oxford.