Skip to main content
Welcome to the new GMFUS website!
Learn More
Read the latest news and insights on the unfolding Russia situation from our experts.
Explore Here
of
Insights
Transatlantic Trends 2020

8 min read
Share
Photo Credit: mariia_may / Shutterstock
The digital economy has been a source of tension for transatlantic partners, as Europeans have sought to regulate and tax American tech giants and Washington has called foul. But public opinion is aligned; even Americans think tech giants should pay more. Americans are more worried than the French and Germans about digital challenges from privacy to cyberattacks and fake news.
Print Article

What do you think of the tax rate paid in your country by large U.S. technology companies?

A plurality of respondents from all three countries supports increasing taxes on big American technology companies, with the highest support in France.

A large part of respondents from all three countries support increasing taxes on big American technology companies. While the tendency is a bit higher in France than in Germany or the United States, the figures are (perhaps surprisingly) similar, with a plurality of 38% to 43% in all countries in favor.

Though more French support higher taxes, they appear less concerned by this issue than their president, who has been very vocal on the subject and supported a law passed in 2019 to tax large technology companies (43% want to see higher taxes, while 39% think current levels should be maintained or even lowered, and 18% do not know). In Germany and France, support for higher tech tax rates tends to increase with age, with 60% of French and 59% of Germans age 55 and older wanting tech companies to pay more taxes.

The support for raising tax rates on big American technology companies is lowest in the United States, where support for lower taxes is also highest (at 16% double the German proportion). There are notable and predictable partisan divides, with half (50%) of Democrats in favor of higher taxes compared to only 30% of Republican respondents. But it seems not to be a salient issue, as almost a quarter of Americans did not know what they thought.

The June 2020 U.S. withdrawal from OECD negotiations on digital taxation threatens to reignite trade disputes within the transatlantic community.

What do you think of the tax rate that is paid in your country by large U.S. technology companies? 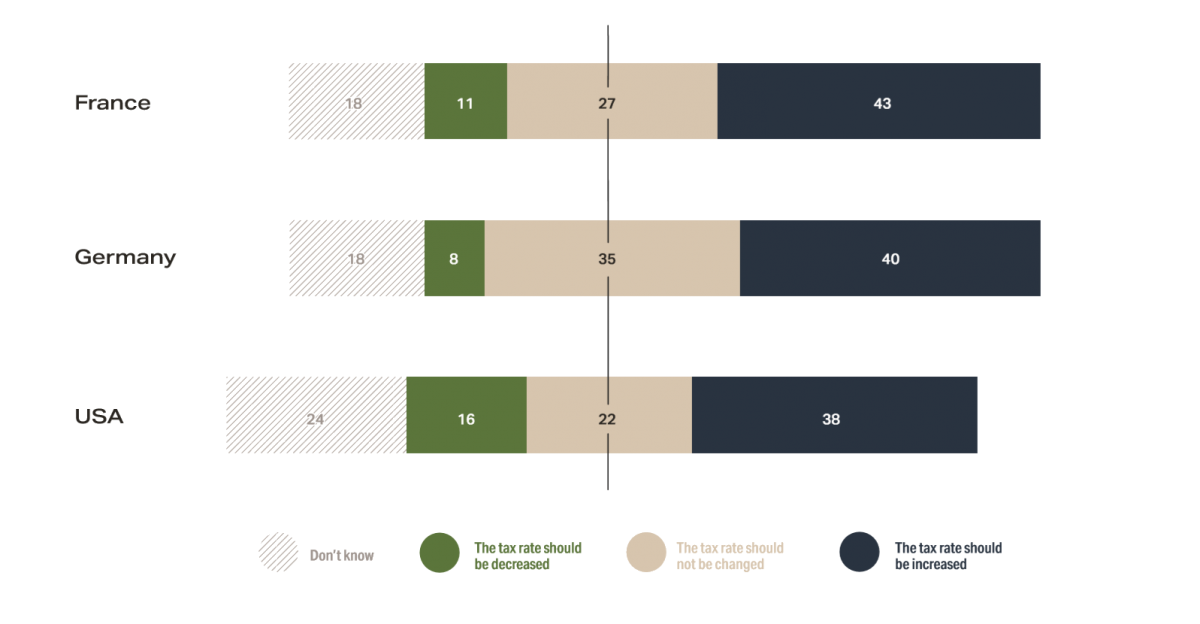 The vast majority of respondents from all three countries express concern about digital issues, from the spread of fake news, to cyberattacks, and data protection. Across the board, Americans are the most worried.

The top concern of Americans and French is the protection of personal data (86% and 82%, respectively, are very or somewhat concerned). In the United States respondents are nearly equally worried about cyberattacks on critical infrastructure (83%) and the spread of fake news and political manipulation (82%). In Germany, respondents are most worried about cyberattacks on critical infrastructure (77%), with worries about fake news closely behind (75%).

French and American respondents expressed deep concern about job loss due to the arrival of artificial intelligence (AI), with 72% of French and 71% of Americans describing themselves as very or somewhat concerned. In contrast, Germans, with their relatively strong economy and low unemployment before the coronavirus pandemic, are less worried: only 59% of Germans are concerned and a full 29% reported that they were not concerned about job loss.

There were significant generational differences in attitudes toward digital issues. Interestingly, it is not the youngest respondents who are most relaxed about the digital world, but those ages 35 to 44. This cohort in all three countries expressed less concern about digital issues than older respondents (who entered the digital age as adults) and younger respondents (digital natives). In the United States, only 36% of respondents ages 35 to 44 years old described themselves as “very concerned” about cyberattacks, compared to 45% of those ages 18 to 24, and 65% of those age 55 and older. Likewise, the 35-44-year-old cohort were less concerned about personal data protection, fake news, and social media addiction. 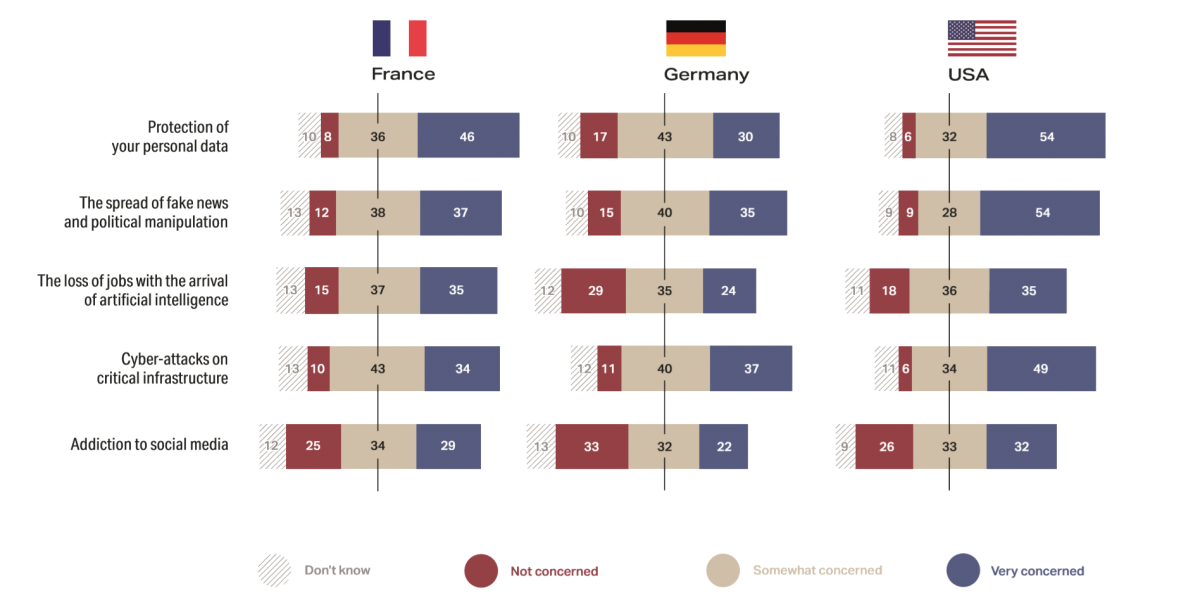 Is your country doing enough to help citizens adapt to the impact of digital technologies in the workplace?

Prior to the coronavirus crisis, respondents in all three countries were divided on whether their governments were taking somewhat adequate and somewhat inadequate measures. After the crisis, French and American respondents are more satisfied, Germans less.

It is interesting to note that while the crisis has had a positive impact on American and French perceptions of their respective governments’ measures to help citizens adapt to the impact of digital technologies in the workplace, it had the opposite effect on Germans, who were already the most critical.

Before the pandemic, respondents in all three countries shared the feeling that their government's actions were generally inadequate, with the highest level of dissatisfaction in Germany (54%), followed by France (46%), and the United States (38%).

The split between positive and negative views was highest in Germany (54% inadequate to 24% adequate) and lowest in the United States (38% inadequate, 36% adequate). Twenty to twenty-six percent of respondents in all three countries did not know how to judge their government's response.

In the second wave of the survey, with life suddenly much more digital as many worked from home, French and Americans found their government's actions more adequate than four months earlier (in France up 7 points to 41% and in the United States up 5 points to 41%). In contrast, slightly more Germans, were dissatisfied: 54% pre-crisis vs. 58%.

There are generational differences that carry through the three countries. Young people (ages 18-24) are more likely to find that their governments are taking adequate measures (50% of French, 29% of German and 47% of Americans). Supporters of the governing parties also tend to have a more positive perception of how their government (and thus their party) is responding: 61% of President Macron's of En Marche party in France, 33% of Christian Democrat supporters in Germany, and 56% of Republicans in the United States find their government is preparing citizens for the tech revolution.

How adequate are the measures your country’s government has taken to help citizens adapt to the impact of digital technologies in the workplace? 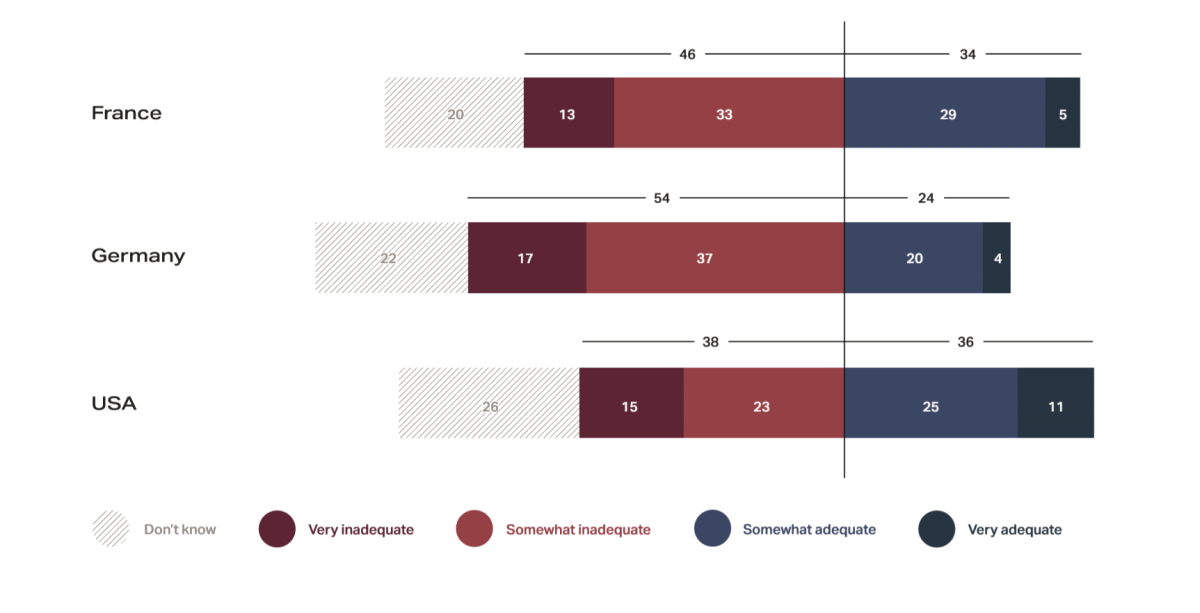 The coronavirus crisis has had an impact on citizens' perceptions of government measures on technology in the workplace. This impact has been generally positive in France and the United States, and slightly negative in Germany. Despite being the economic powerhouse of Europe, for years, Germany has struggled to compete in the global technology race—the pandemic appears to have revealed further shortcomings in this regard. In France and in the U.S., lockdown measures have forced a large number of citizens to work from home, with an increased use of digital technologies. This experience may have revealed to the French the usefulness of President Macron’s 2017 ordinances, which introduced and set a framework for teleworking in law. 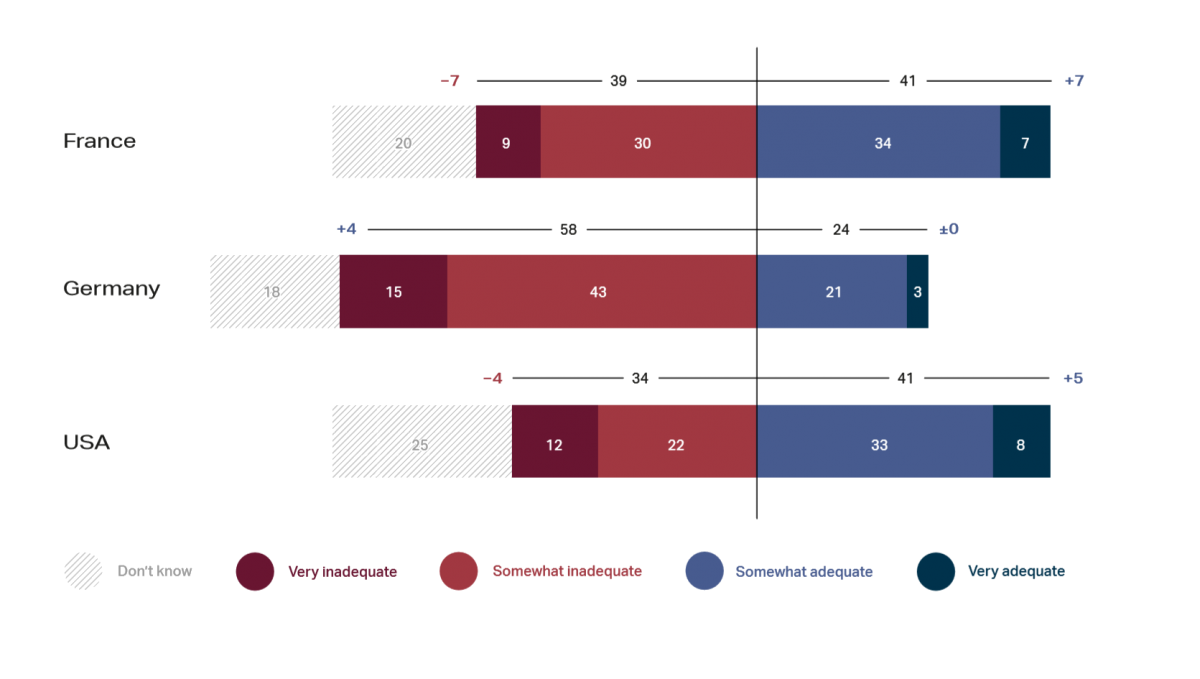 Who should be responsible for regulating content on social media?

A super majority think that content on social media should be regulated. Respondents supported social media companies regulating themselves, especially Americans, while French and Germans also voiced almost equal support for a government or EU role.

The vast majority of survey respondents in all three countries believe that social media should be regulated in some way (76% in France, 72% in Germany, 70% in the United States). A plurality of respondents in all three countries support social media companies regulating themselves (35% in France, 31% in Germany, 49% in United States). However, support for a national government role in regulation was also significant (23% in France, 19% in Germany, 21% in the U.S.). French and German respondents were split on whether regulation should happen at the national or EU level, with Germans showing a slight preference for an EU role (22% EU vs. 19% national) and French for a national approach (23% national vs. 19% EU).

Americans were divided along party lines, but in the reverse of their traditional positions on government regulation. More Republicans (27%) favored national government regulation than Democrats (20%) or independents (19%). Although this would seem surprising, as Republicans are thought of as the pro-business party of low regulation and limited government, conservatives, and especially the current Republican administration have complained of liberal bias in social media companies. In May 2020, Twitter flagged a series of tweets from President Trump for containing manipulated media, as part of the platform's new efforts to combat misinformation.

Interestingly, though in a different question in this survey Americans expressed more concern than their European counterparts for the spread of fake news (54% very concerned, compared to 27% and 35% of French and Germans), slightly more Americans think social media content does not need to be regulated (10% vs. 7% in France and Germany). This is in keeping with American disinclination for government regulation of speech while in both France and Germany support for government oversight and speech restrictions is generally higher, and they have already in place comprehensive government regulations on social media content. 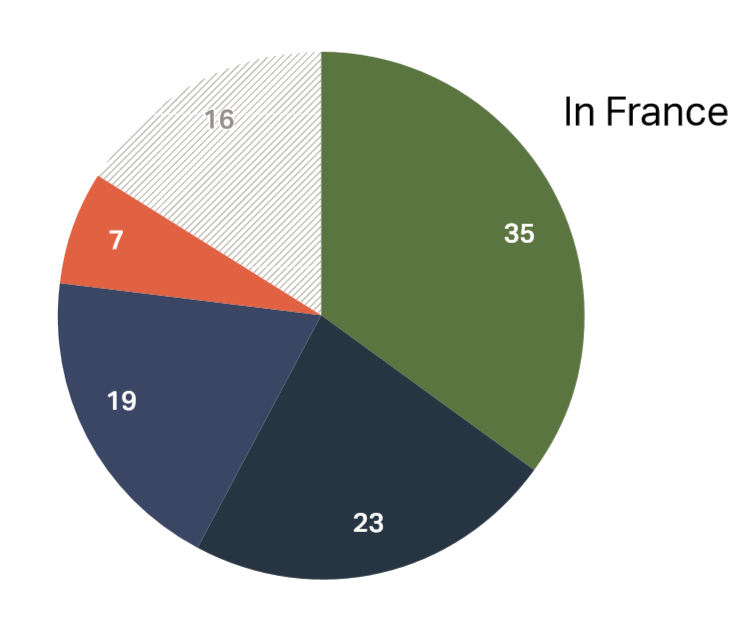 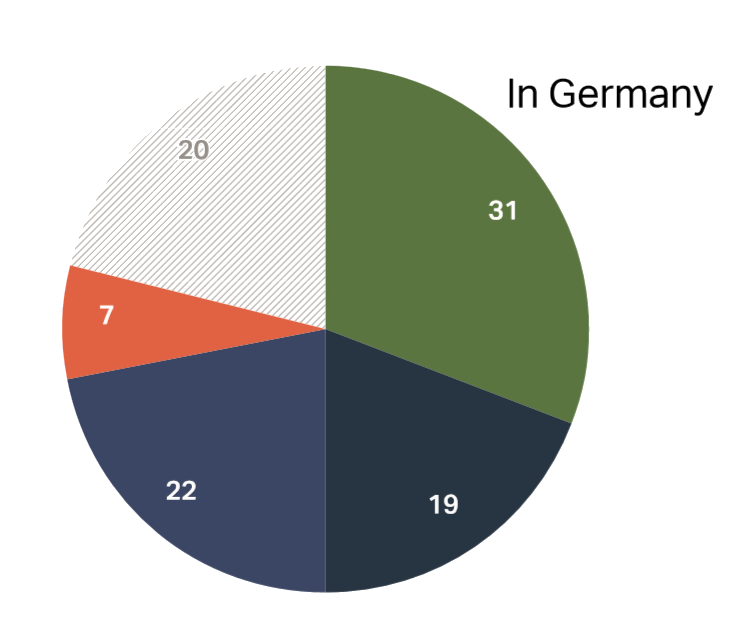 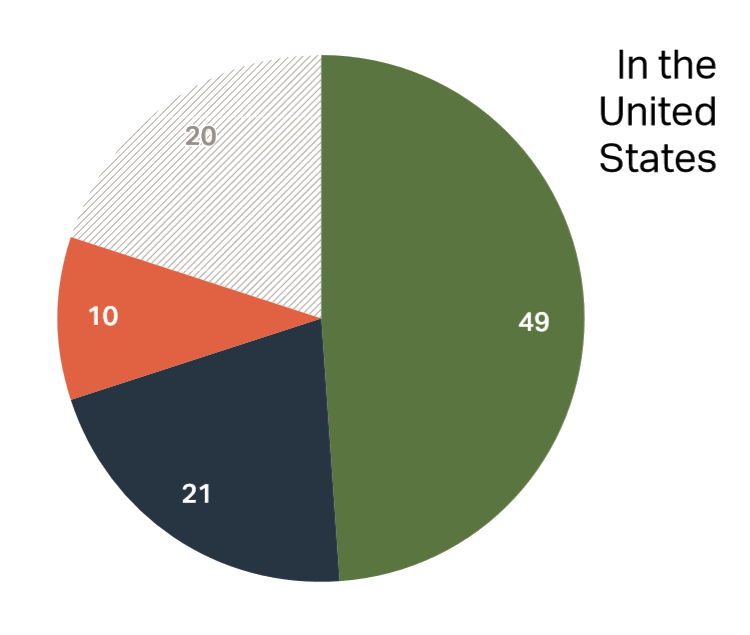