SHOULD THE UNITED NATIONS DO MORE? 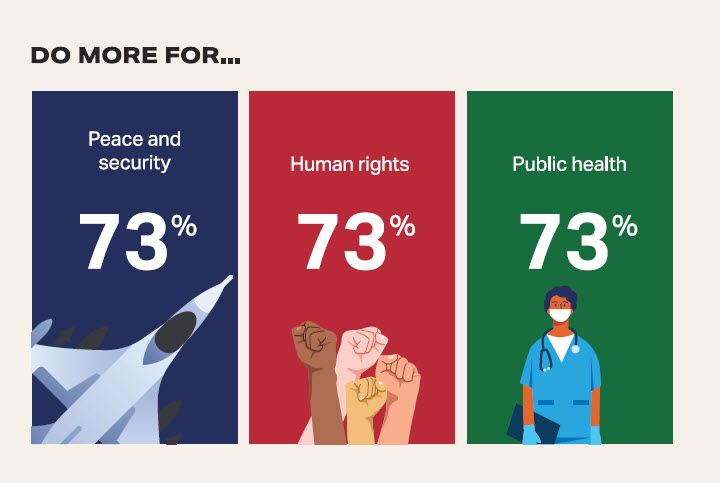 Respondents from all countries want the United Nations (UN) to be much more active in addressing global challenges, from peace and security to humanitarian aid and regulating cyberspace.

Transatlantic partners have regularly reaffirmed their commitment to multilateralism, and the Biden administration has been outspoken about its intention to reinvest in multilateral organizations. At the same time, the UN has been increasingly affected by the growing tensions among great powers. These tensions, however, seem not to have turned transatlantic opinion against the UN. Instead respondents are in favor of a more active UN in all the fields considered, and widely reject the idea that the UN should be less involved in any of these issues. Beyond the general support, the results also show a clear public prioritization of four issues: climate change, human rights, public health, and peace and security.

More than half of the population in all 11 countries think that the UN should either do somewhat or much more in all areas, with slightly lower numbers regarding the regulation of cyberspace. Two countries in particular are most enthusiastic: Turkish and Italian respondents consistently believe that the UN should “do much more” in all fields, by a large margin. The Spanish respondents are similarly pro- UN. In all three countries, people are especially engaged on the question of the protection of refugees and humanitarian aid, with nearly half of respondents wanting the UN to do much more. Their specific experiences as border countries receiving high numbers of refugees in the past decade can explain this priority. In most countries, older generations are more likely to favor a much more active UN than the younger respondents, particularly in the fields of peace and security and human rights.

Interestingly, the three countries that are permanent members of the UN Security Council (France, the UK, and the United States) are also those with the population most likely to answer that they do not know. Between 10% and 20% of the American, British, and French respondents felt like they could not answer the questions, depending on the issue.

More than two-thirds (67%) of Turks believe that the UN should be much more active on human rights issues. This is the strongest country response overall, tied with Italians support for much more action on climate change.

SHOULD YOUR COUNTRY DO MORE OR LESS TO ADDRESS GLOBAL WARMING? 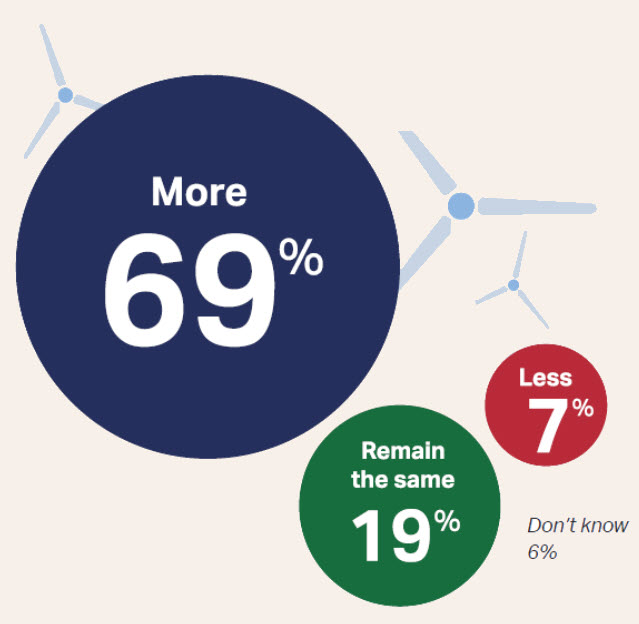 Consistent with the perceptions of the most pressing challenges requiring transatlantic action, the vast majority of respondents believe their country should do more to combat climate change (69% overall average). In recent years, environmentalist movements have gained increased traction on both sides of the Atlantic, from the Fridays for Future movement in Europe to the Green New Deal in the United States. Most countries believe their governments should do much more, while the remaining countries’ respondents believe they should do somewhat more.

Of all respondents surveyed, 68% indicate that their governments should be doing more, of which a clear plurality of 40% are calling for much more action. Appeals for increased action are the highest in Turkey (83%), Italy (81%), and Spain (81%). 70% of Italians are pushing for much more climate action from their government. The lowest calls for increased action come from the Netherlands (53%) and Sweden (59%). Around a quarter of the respondents in the Netherlands (28%), Sweden (25%), Germany, Canada, and the UK (each 24%) are satisfied with their country’s policies to tackle climate change, although the majority of respondents in these countries still think that their government should do more or much more to address this issue.

Upon closer examination, a political divide appears across most countries. Generally, liberal parties would like increased action over conservative and especially far-right parties. Particularly notable divides are visible in the U.S. (83% of Democrats vs. 45% of Republicans), and Turkey (65% of CHP supporters vs. 41% of AKP ones). The most striking differences, however, are visible in Germany, where 88% of Green respondents would like increased overall action, compared with just 31% of AfD respondents. Furthermore, more AfD respondents prefer decreased overall action than maintaining current policies (34% vs. 28%).

Upon closer examination, a political divide appears across most countries. Generally, liberal parties would like increased action over conservative and especially far-right parties. Particularly notable divides are visible in the U.S. (83% of Democrats vs. 45% of Republicans), and Turkey (65% of CHP supporters vs. 41% of AKP ones). The most striking differences, however, are visible in Germany, where 88% of Green respondents would like increased overall action, compared with just 31% of AfD respondents. Furthermore, more AfD respondents prefer decreased overall action than maintaining current policies (34% vs. 28%).

In Turkey, which already has the highest share of people in favor of more action on climate change (83%), the likeliness to support more action increases with age: while three out of four respondents (74%) aged between 18 and 24 share this opinion, more than nine out of ten (92%) respondents older than 55 demand stronger action to tackle climate change. 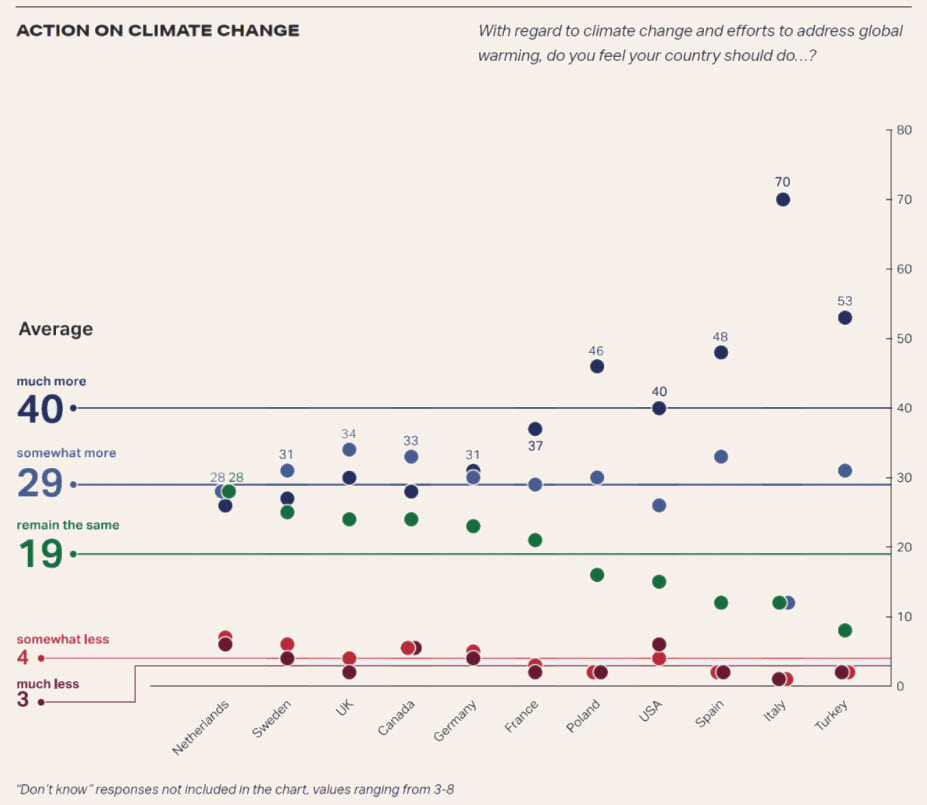 IS MIGRATION POSITIVE OR NEGATIVE FOR YOUR COUNTRY? 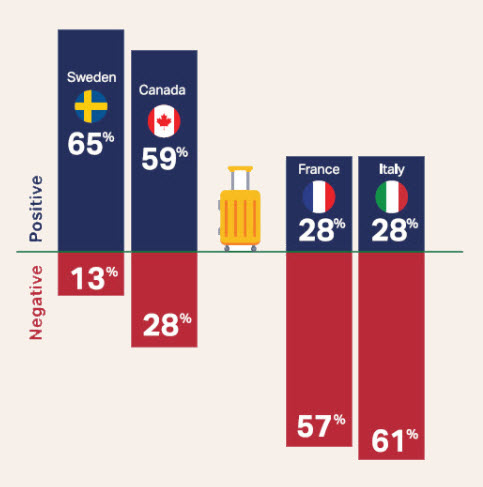 Migration is a contested issue among the public on both sides of the Atlantic and shows an important divide in public opinion across countries. While roughly two-thirds of Swedes (65%) and three out of five Canadians (59%) think that migration is very positive or more positive than negative for their country, almost the same share of Italian (61%), French (57%), and Dutch (55%) respondents regard migration as very negative or more negative than positive for their country. An overall positive assessment of migration prevails in the U.S. (47% positive to 37% negative), the UK (51% positive to 36% negative), and Canada (59% positive to 28% negative).

While migration is considered very negative or more negative than positive by two out of five respondents (40%) across all countries on average, the percentage of respondents sharing this view is significantly lower in Sweden (12%) and Turkey (16%). Interestingly, the majority of Turks (58%) are undecided whether migration is negative or positive for their country.

Respondents leaning toward conservative or parties farther right on the political spectrum have a very negative assessment of migration. Compared across countries, this is most striking in Germany, where four out of five (82%) of respondents aligned with the far-right AfD think that migration is overall negative, whereas less than half of all German respondents (46%) share this view. Thus, a AfD-leaning respondent is almost twice as likely to have a negative opinion of migration than the average German respondent. Similar patterns apply to Spanish supporters of the far-right VOX party (75% negative vs. 47% national average) and Dutch respondents supporting the right-wing parties PVV (78% compared to a national average of 55%). Interestingly, the French respondents leaning toward the center-right Les Républicains (84%) have even a slightly more negative opinion than respondents of the far-right Rassemblement National (82%), but both are about 25 points above the national average (57%).

In countries where a positive view on migration prevails overall, conservatives view migration more negatively: This is the case for 55% of Republican-leaning Americans, compared to the 37% average, and 47% of the respondents leaning toward the Conservative party in Canada, compared to only 29% of Canadians on average.

Sweden shows an important generational and gender gap on migration. Men are twice as likely to consider migration as “mainly positive” than women (28% compared to 14%), and the proportion of 18-24 year-olds with a negative view of migration (33%) is six times higher than the their compatriots 55 and older (5%). 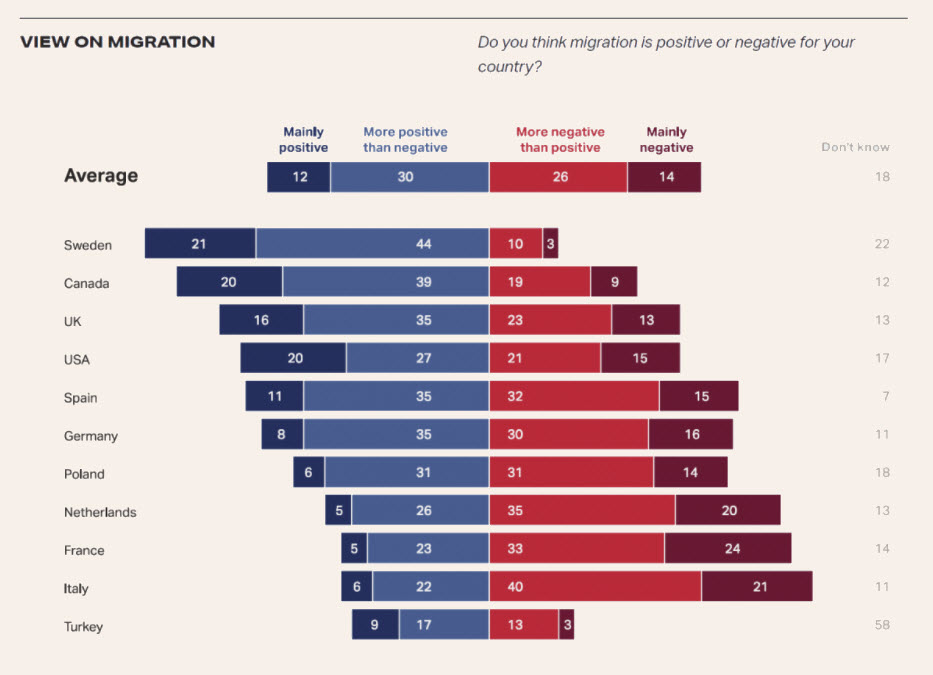 SHOULD YOUR COUNTRY’S POLICIES TOWARD MIGRATION BE MORE OR LESS RESTRICTIVE? 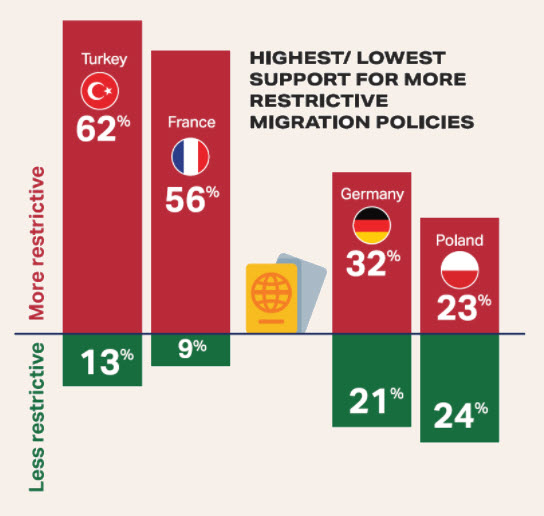 A majority of the respondents support more restrictive policies toward migration, with the exception of Poland, Germany, and Canada.

Several years after an unprecedented migration crisis in modern Europe, reflections on migration, integration, and identity still play a key role particularly in European countries, albeit recently overshadowed by the coronavirus pandemic. Nevertheless, there is not necessarily a correlation between the challenges related to migration that countries have been facing in the last years and public opinion. Respondents in Turkey (60%), France (56%), and Italy (54%) show the strongest support for more restrictive policies, but are on almost the same level as the Netherlands (55%) and Sweden (54%). In Canada (46%) and Poland (37%), a majority is in favor of maintaining their countries’ current approach on migration, whereas public opinion in Germany is balanced between maintaining existing policies or adopting more restrictive ones (each 32%). The opinion of respondents on their country’s attitude toward migration policies does not necessarily depend on their opinion about migration. A majority in France and Italy support more restrictive policies, and this is also the case for Swedes (55%) and Turks (62%); however, compared to France and Italy, an overall negative image on migration does not prevail in Sweden and Turkey (see question 21).

Similar to the general assessment of migration (question 21), the views on policies toward migration strongly vary with political affiliation; supporters of conservative, centerright, or far-right parties are generally supportive of more restrictive policies. Interestingly, respondents with the highest income level show above-average support for more restrictive policies in some countries: This gap is particularly striking in France (76% compared to the 56% national average), but is also significant in Turkey (72% compared to 62%) and in the U.S. (48% compared to 42%). Independent from the overall opinion on policies toward migration, an important generational gap is noticeable across countries. Young people aged between 18 and 24 years show much stronger support for less restrictive policies on migration than their older compatriots. This applies across the board, in both traditionally migrant countries and others as well. In the U.S., 40% of 18-24 year-olds prefer less restrictive measures, compared to 17% on national average, and in the UK 28% compared to 14%. Young French (19%), Turkish (20%), Swedish (22%), and Spanish (30%) respondents are also above average in supporting less restrictive measures; in the case of France, this is almost twice as high as the national average (10%).

In Germany, voters of the far-right AfD and the liberal FDP show a surprising level of convergence when it comes to views on migration policy: Half of them (both 51%) are in favor of more restrictive policies toward migration, and thereby highly above the national average (32%). 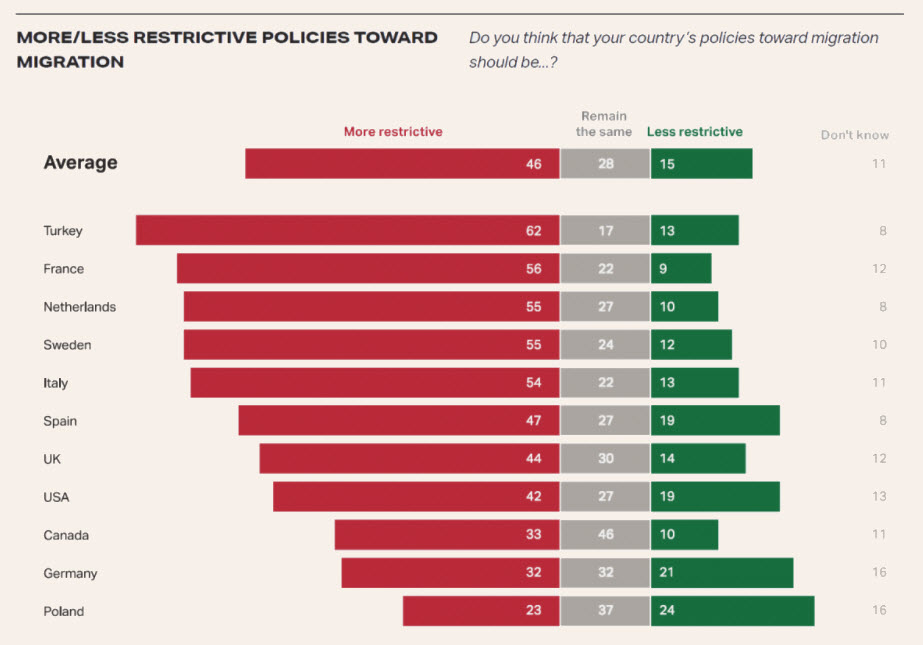