HOW INFORMED DO YOU THINK YOU ARE ABOUT THE FOREIGN POLICY OF YOUR COUNTRY?

Most respondents indicate that they are somewhat informed on the foreign policy of their respective countries. A plurality of Italian and French respondents, however, believe they are not very informed.

This question serves to provide a baseline for respondents’ own view of their understanding of the foreign-policy related issues asked about in this survey. Overall, a majority of respondents are either somewhat or very well informed about their countries’ foreign policy. The results of this question are consistent with the other results recorded in the survey. Most notably, only an average of 5% of respondents chose “don’t know” across the questions in the survey. 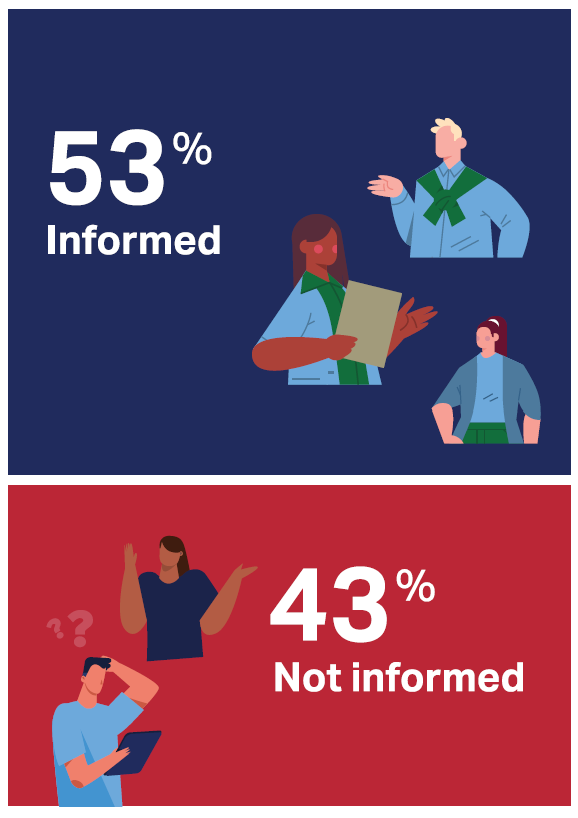 In all countries, there are myriad divides according to various indicators, mainly gender, age, socioeconomic status, and education. In all countries, men indicated higher levels of foreign policy knowledge than women, with the biggest gender gaps in Canada (63% vs. 36%), the United States (71% vs. 43%), and the UK (65% vs. 40%). Many, but not all, countries have a generational divide, with older respondents more likely to be foreign policy savvy than younger respondents. Unsurprisingly, respondents from higher socioeconomic and education levels have greater confidence about their foreign policy knowledge than those of lower ones, with the biggest disparities in the United States and Italy (78% of middle-upper earners vs. 41% of lower earners and 59% of Italians with advanced education vs. 33% with basic education). 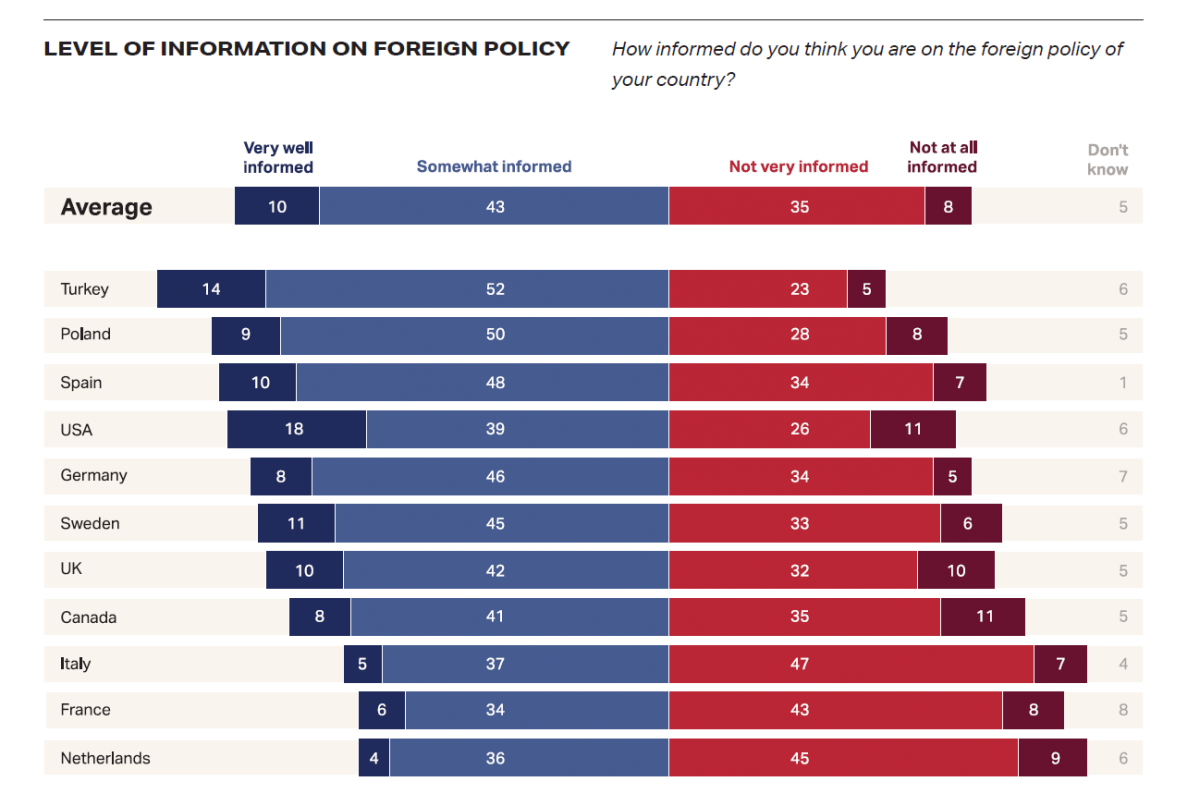 WHAT IS THE MOST IMPORTANT SECURITY CHALLENGE?

In a majority of countries, pandemics are perceived to be the most important security challenge, but climate change, terrorism, and migration are also considered by many to be critical issues in the years ahead.

In the midst of the ongoing coronavirus crisis, pandemics emerge as the most important or second most important security challenge on both sides of the Atlantic. While countries in Europe and North America are currently at different stages of the crisis, they continue to generally share a similar level of concern. The results, however, also show that the pandemic has not overshadowed all other concerns. The threat of terrorism ranks first or is tied for first in three of the surveyed countries, and overall concern about climate change is also high. In the United States and France in particular, terrorism is perceived as a much more pressing challenge in 2021 than it was shortly after the coronavirus outbreak in 2020. 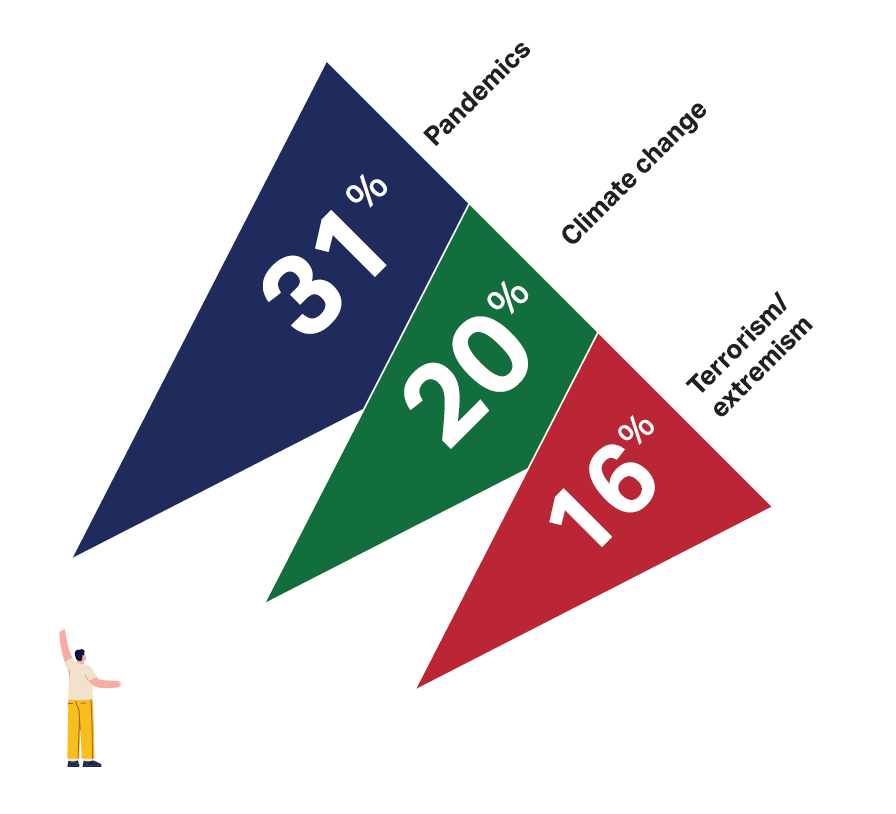 The results reveal a variety of national threat perceptions. While 56% of Poles, 43% of Spaniards, and 42% of Italians see pandemics as the most important security challenge, only around 20% of Britons, Americans, and French share the same view. A significant proportion of people in France (30%), Turkey (24%), the UK (23%), and the United States (22%) appear to be concerned by the threat of terrorism, whereas very few Poles or Spaniards (6% and 7%, respectively) view terrorism as an important challenge.

The perception of climate change as a security challenge also varies across countries. Concern is highest in Germany and Canada, where nearly one-third (29% and 28% respectively) see it as the most important issue, whereas only 15% of Poles and only 10% of Turks place high importance on climate change. Finally, migration is seen as a key challenge in Spain (20%) and the Netherlands (20%), and is the most important challenge for the Swedes (28%).

In France, 38% of those 55 and older rate terrorism as the top challenge, in contrast to only 25% of the 18-24 year-olds and 19% of the 25-39 year-olds. A similar variation is noticeable in the UK and Turkey, with older respondents 8-11 points more concerned about the terrorist threat. 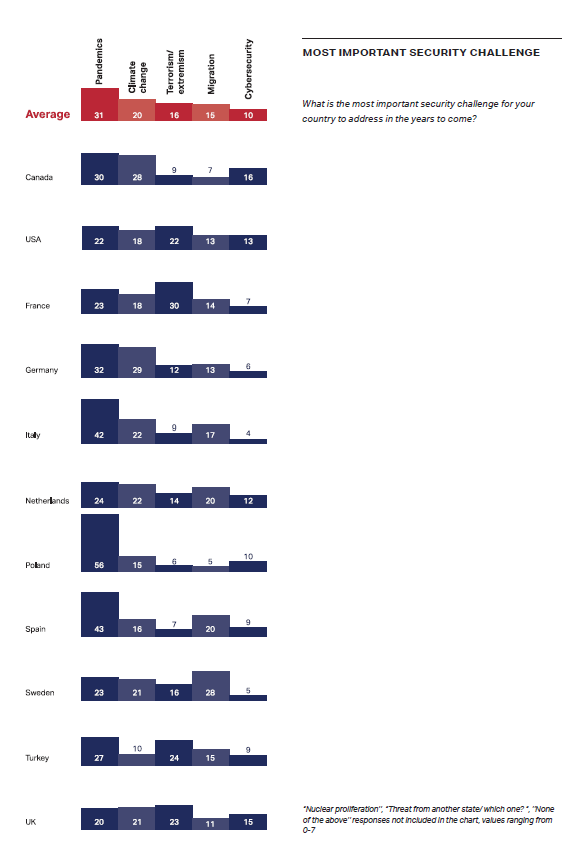 HOW IMPORTANT IS NATO FOR THE SECURITY OF YOUR COUNTRY?

A majority of the population across all countries see NATO as either very important or somewhat important to the security of their country. More than 80% of respondents also say that they know what NATO is.

The populations in the countries surveyed remain widely convinced that NATO is either somewhat important or very important to their national security. This confirmation of NATO’s relevance on both sides of the Atlantic comes as the Biden administration has reaffirmed U.S.  engagement in NATO. Interestingly, across the 11 countries polled, only very few respondents (10% or fewer) believe that NATO is not at all important. The level of general awareness of NATO’s nature and mission is also remarkable, as an overwhelming majority—between 80% (in the U.S.) and 93% (in Poland)—of respondents say that they are familiar with NATO. 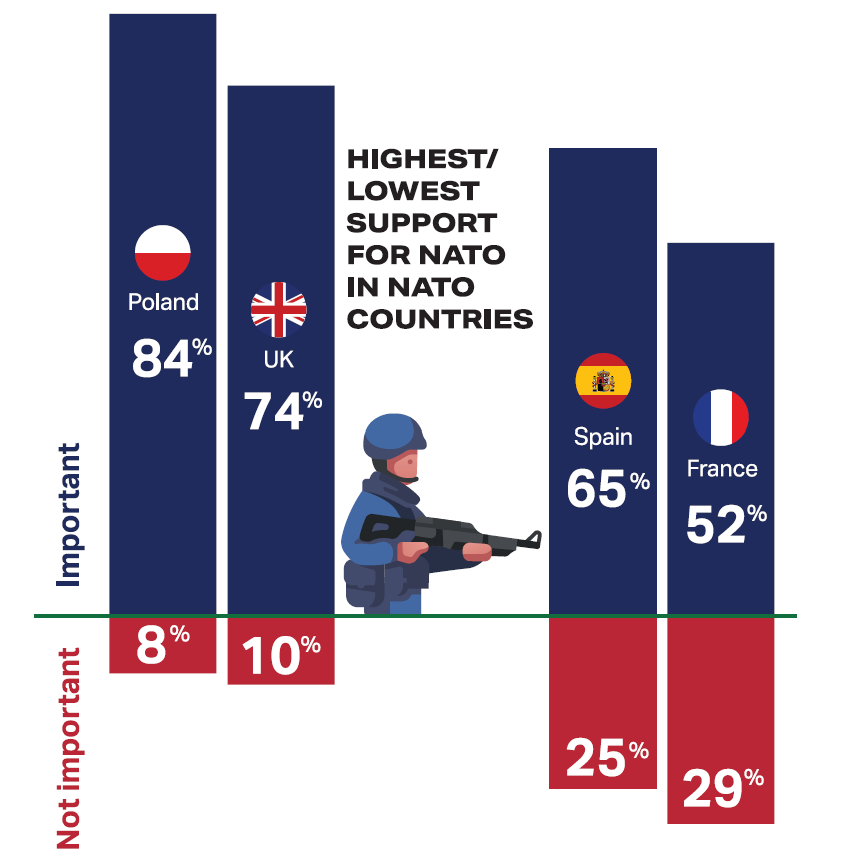 Two EU countries have outlying results. In Poland, the perception that NATO is important for national security is overwhelming. In total, 84% of Poles consider NATO either somewhat important (41%) or very important (43%), and only 8% see NATO as less or not at all important. France is at the other end of the spectrum, though even here support for NATO is still relatively high: Just over half of the French (52%) think that NATO is either somewhat important or very important to their country’s security. This remains stable from 2020, when 53% of the French population expressed the same view.

In total, only 12% of the French answered that NATO was very important—half as many as in Germany, Italy, Spain, or the Netherlands. The French are also the most likely to consider NATO as not very important or not important at all (30% vs. 16% of Americans and 10% of Britons). Overall, NATO is also perceived as particularly important in the UK (74%) and the Netherlands (71%), and roughly two-thirds of the respondents in all other countries (67% on average) share this belief. In Sweden, which is not a NATO member state, support is somewhat lower (57%). On average, only 16% of the respondents consider NATO to be not important to the security of their country, and the share of people considering NATO unimportant is lowest in Poland (8%), Canada (14%), and the Netherlands (15%).

Across the other NATO member states polled, the results are remarkably consistent. Large majorities (between 64% and 74%) affirm the importance of NATO. Across demographics within countries there is also a striking homogeneity. With a few minor exceptions, the importance of NATO finds consensus in the respective public independent of age, party affiliation, education, region, or income.

In most cases, men are more likely to see NATO as important than women do, as are older generations compared to the younger generations. In the UK, NATO is seen as somewhat important or very important by more than 80% of those 55 and older, whereas about half as many of the 18-24 year-olds agree that NATO is important (48%). A similar 30-point difference between generations can be seen in the Netherlands. 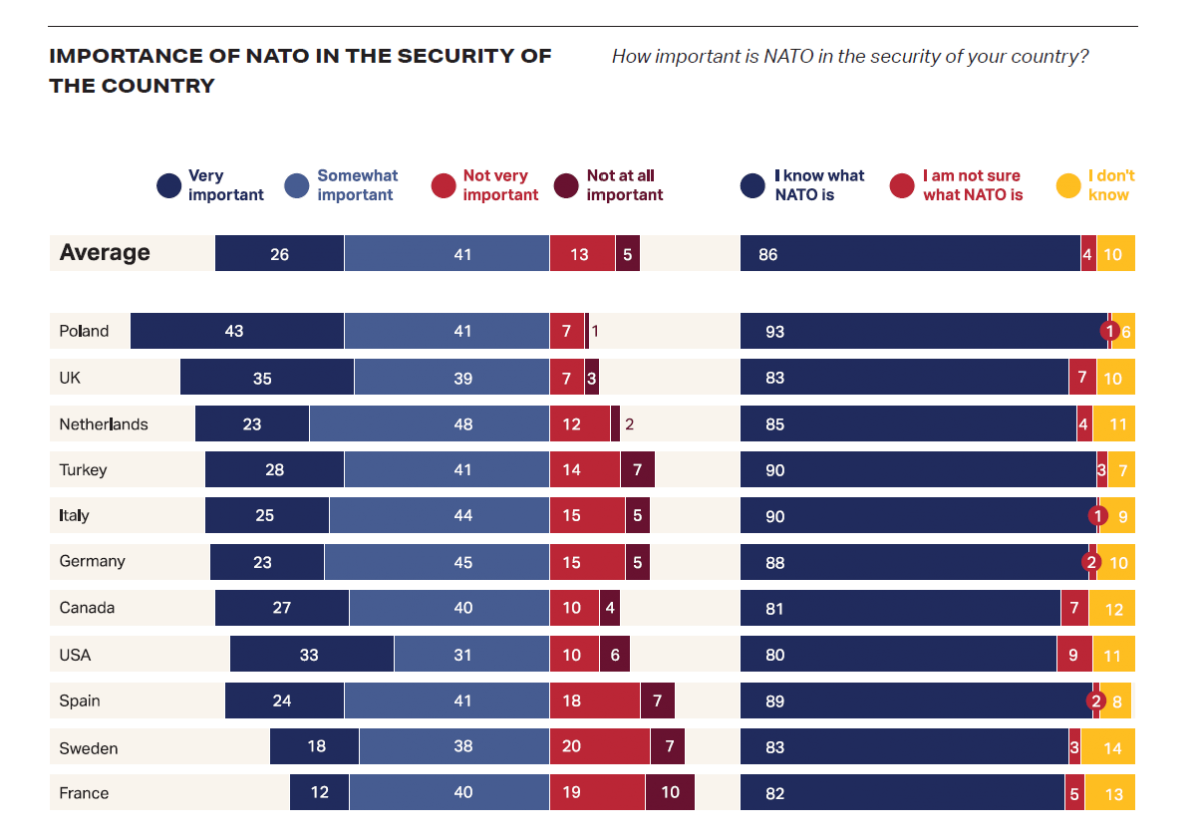 HOW INVOLVED SHOULD THE UNITED STATES BE IN THE DEFENSE AND SECURITY OF EUROPE?

A majority of people think that the United States should be somewhat or very involved in the defense and security of Europe, except in Sweden, which is divided, and Turkey.

Europeans continue to rely on U.S. security guarantees, and generally expect or want the United States to remain committed to the defense of the continent. Despite some differences regarding the priorities for transatlantic cooperation, people in eight of the ten European countries surveyed share a positive view of U.S. involvement. A vast majority of Americans also continue to approve of U.S.  involvement in European security, including a quarter who think the U.S. should be greatly involved. 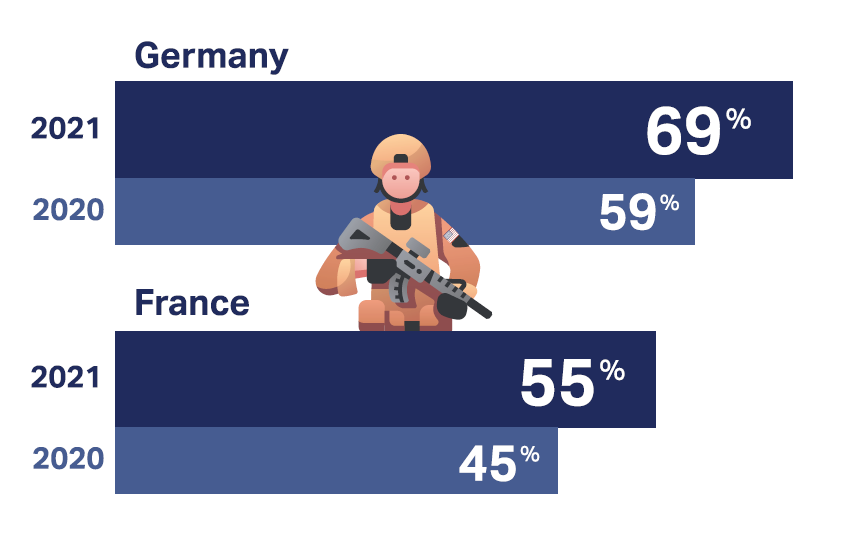 Four countries stand out. Poles and Americans show a higher level of support, with respectively 84% and 69% saying that the United States should be somewhat or greatly involved in European security and defense. In both countries, this view is shared across the population, although older generations are even more supportive of U.S. involvement than younger ones.

In Sweden (46%) and Turkey (31%), in contrast, less than half the population thinks that the U.S. should be somewhat or greatly involved in the security of Europe.

In all the other countries surveyed, between 54% (France) and 69% (Germany) are in favor of U.S. involvement, and nearly a quarter of Germans and Spaniards think the United States should be greatly involved in securing Europe.

In the United States, political affiliation correlates with opinion on NATO, with 79% of the Democrats in favor vs. 63% of the Republicans, but the approval remains well above 50% across demographics and parties. Party affiliation can also account for particularly high support for U.S. involvement in Poland, with more than nine out of ten respondents which lean toward the governing PiS (91%) and  PO (92%) parties in favor of U.S. involvement. Among the German respondents, support is highest among the CDU/CSU (83%), the SPD, and the Greens (both 80%).

There is a notable increase in French and German support for a U.S. role in Europe compared to one year ago. In 2020 survey results, 45% of French and 59% of Germans supported U.S. involvement. This climb of 10 points in France and Germany is remarkable given that the French and German perceptions of the United States’ global influence are stable compared to 2020. 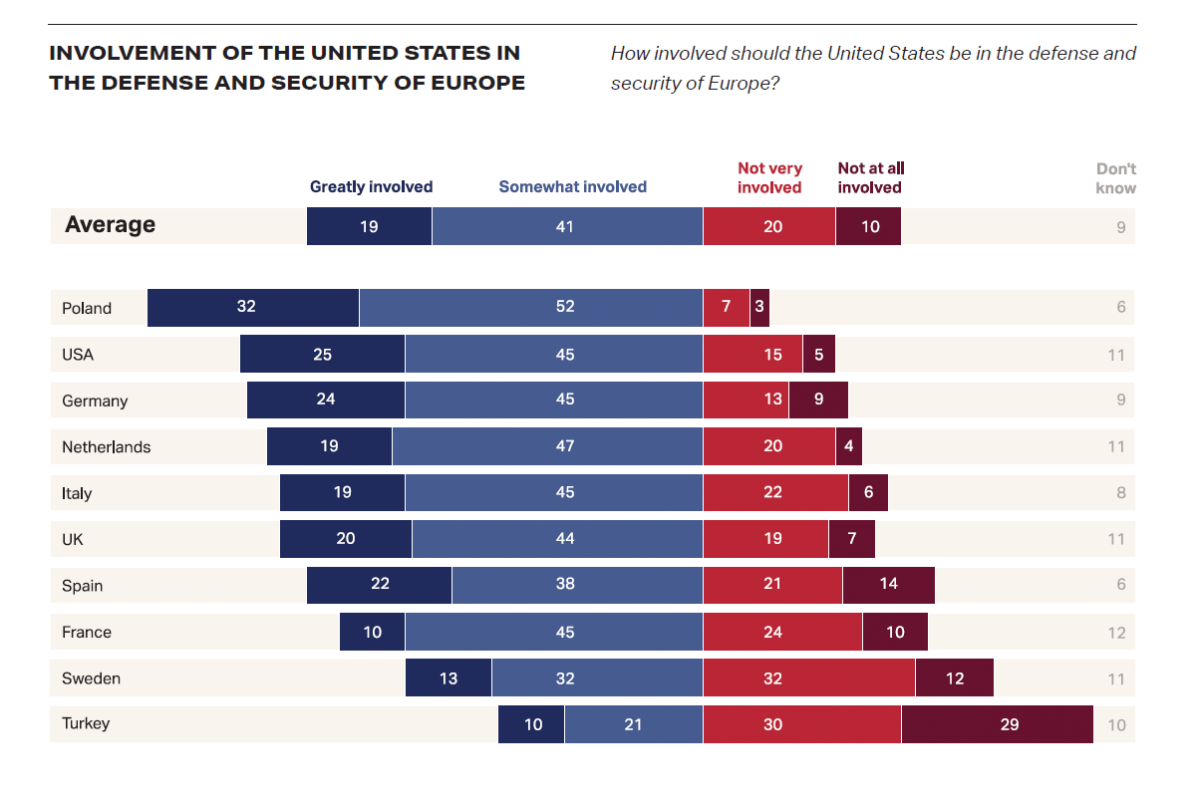 SHOULD YOUR COUNTRY INCREASE OR DECREASE MILITARY INVOLVEMENT IN THE MIDDLE EAST?

A plurality of the respondents want to decrease their country’s military involvement in the Middle East, in most cases because they support a general reduction in foreign interventions.

All the countries surveyed have been involved in some form of military intervention in the Middle East in the past decade, though to varying degrees. The crises in Syria and Iraq have also directly affected European security, while the call to end the “forever wars” has been one of the key foreign policy trends of the 2020 U.S. elections. 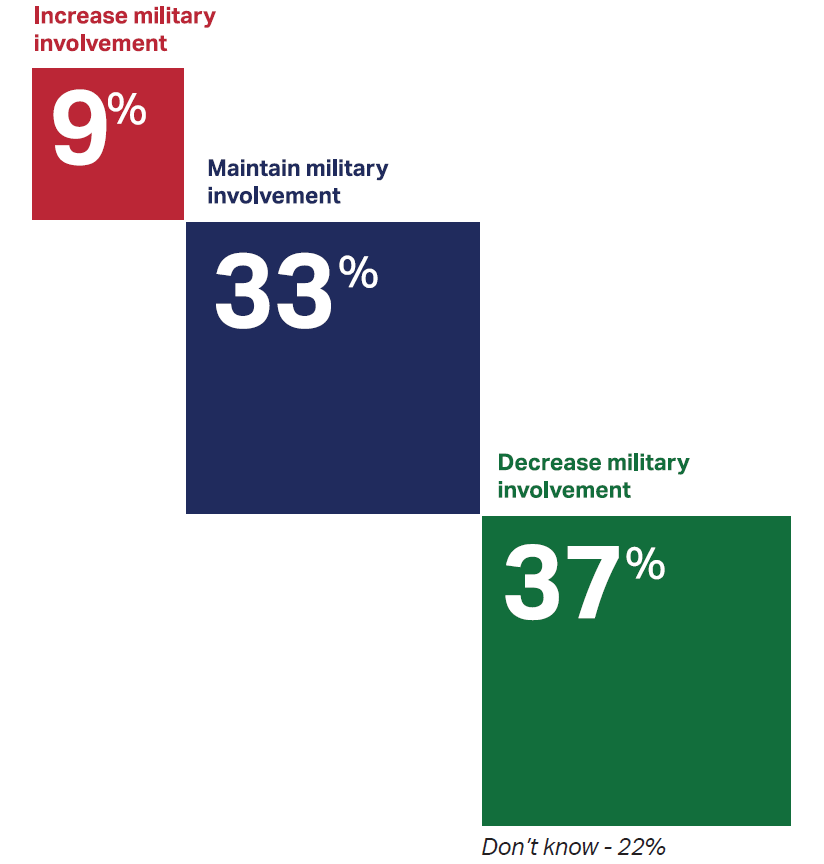 On both sides of the Atlantic, people strongly reject the idea of increasing their military involvement in the Middle East: While 23% of Turks and 14% of Americans support more engagement, less than 10% of the respondents in all other countries agree. Around a third of respondents (33%) want to maintain the same level of military involvement, and between a third (32% in Turkey) and two out of five respondents (41% in France and Spain) want to decrease it. Around 20% of respondents say that they do not have an opinion, though the numbers in the United States and Turkey are a bit lower (17% and 14%, respectively).

There is a significant generational gap in almost all countries, with older people much more likely to say that they want to decrease the military presence in the Middle East than those aged 18-24. In Germany, 52% of the respondents 65 and older support a decrease, versus 16% of the respondents under 25. A similar difference of 20 to 30 points between the two age groups can be seen in Italy, the UK, Turkey, France, Sweden, Spain, and the Netherlands. Younger respondents are also more likely to say that they do not have an opinion.

In the United States, Republicans and Democrats gave remarkably similar answers, with respectively 33% and 34% in favor of decreasing military involvement, 34% and 35% wanting to maintain the current level of involvement, and 16% and 17% supporting an increase.

When asked why they support a decrease in military involvement, respondents do not want to pass the responsibility of military intervention to another country, nor are they motivated by cost—except in France where cost concerns ranked a close second. This view that military interventions should in general be reduced is the top reason for lessening involvement across the 11 countries and is particularly strong in the U.S., the UK, Canada, Spain, and Germany.

The French are among the most skeptical of military involvement of their country in the Middle East, with 41% in favor of a decrease. This view is shared across regions and economic status, but is particularly strong among older respondents, with 53% of those 65 and above saying that they want to reduce military interventions. Only 19% of the 18-24 year-old French share this view, while 46% are in favor of maintaining the current level of involvement. 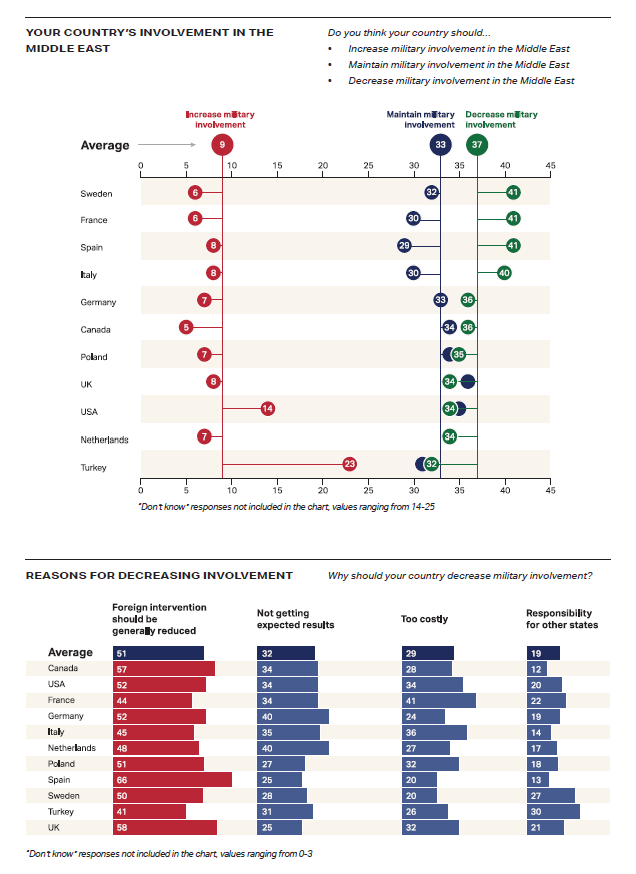