WHAT IS THE MOST IMPORTANT ECONOMIC PRIORITY? 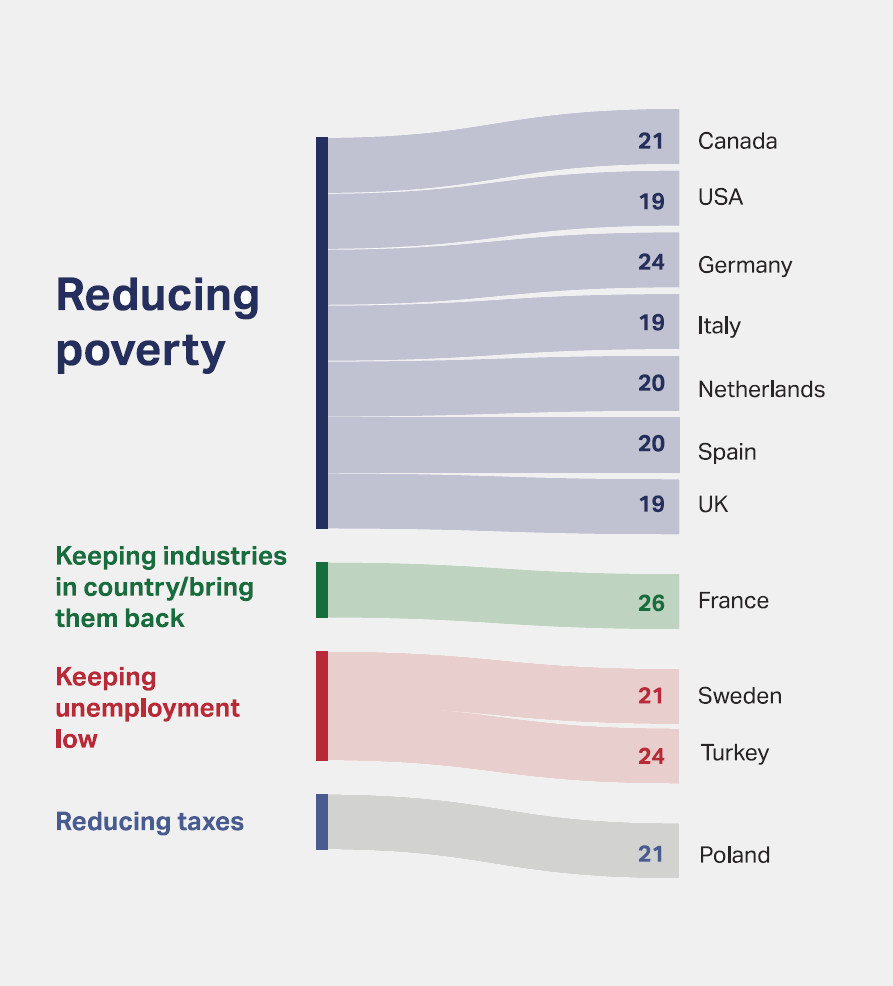 Reducing poverty is perceived to be the most important economic priority across all countries. Retaining domestic industries or bringing industry back is considered the second most important priority, followed closely by maintaining low levels of unemployment.

During the coronavirus pandemic, economies have suffered from a myriad of issues, including varying degrees of unemployment, increased government spending and support, and shuttered businesses. Consistent with the various issues impacting transatlantic economies, overall, not one specific economic priority towers over another. However, the majority of countries on both sides of the Atlantic would put reducing poverty at the top of the list. Reducing taxes nearly makes the top three economic priorities, with the Poles and Italians pushing for it the most. Interestingly, despite shortcomings in countries related to public services, whether in the form of public health or voting, developing and strengthening such services is the second lowest priority of all countries surveyed. Finally, despite French, German, and American respondents pushing for increased taxes on big tech companies in the 2020 survey, overall, taxing big companies is among the lowest economic priorities of respondents in all three countries.

In seven of the 11 countries surveyed, respondents selected reducing poverty as the most important economic priority (19% composite average), with the highest support among Germans (24%). Keeping industries in-country is considered the second most important economic issue (15% overall), including for over a quarter of the French (26%). Nearly the same number of respondents are focused on keeping unemployment low (14%) and reducing taxes (13%). The Turks (24%) and Swedes (21%) are more focused on keeping unemployment low, while more Italians (19%) and Poles (21%) support reducing taxes.

While the reshoring of industries ranks high on the agenda of French respondents, there is an important generational gap: One third of the respondents older than 55 years (33%) share this view, whereas this is the case for only 11% of 18 to 24-year-olds and 14% of 25 to 39-year-olds, which thereby still score below the cross-country average (15%). 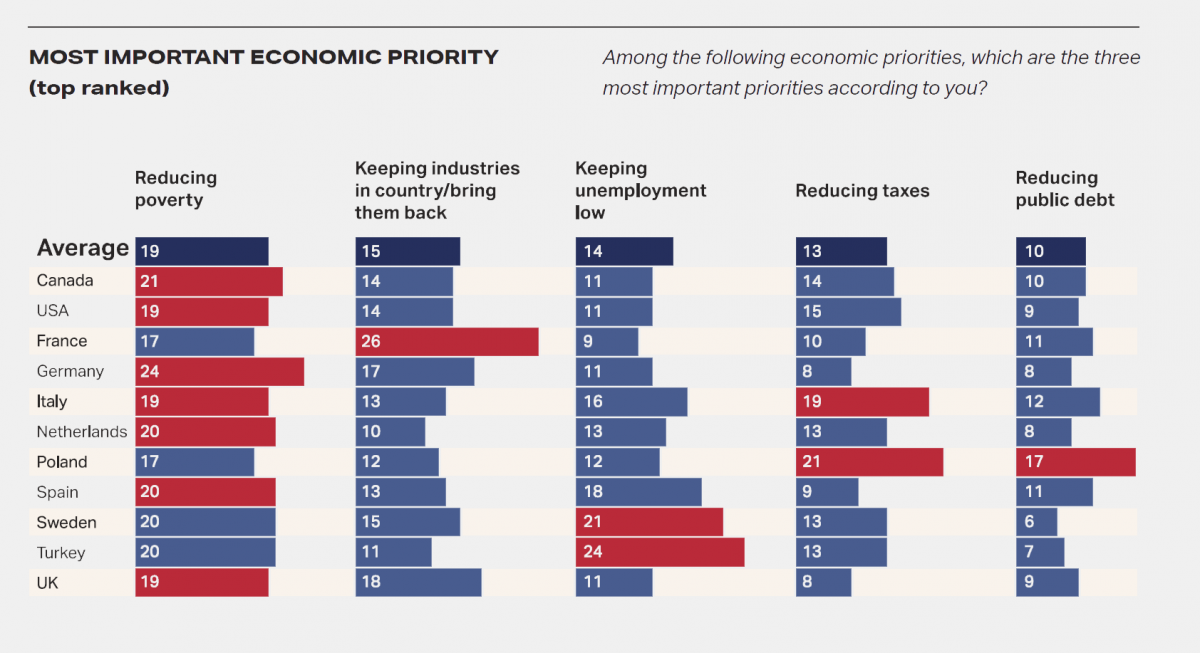 DOES TRADE BENEFIT YOUR ECONOMY?

The majority of respondents in the countries surveyed find international trade beneficial. The positive views are nearly split equally between those perceiving trade as mainly beneficial and at least more beneficial than not. 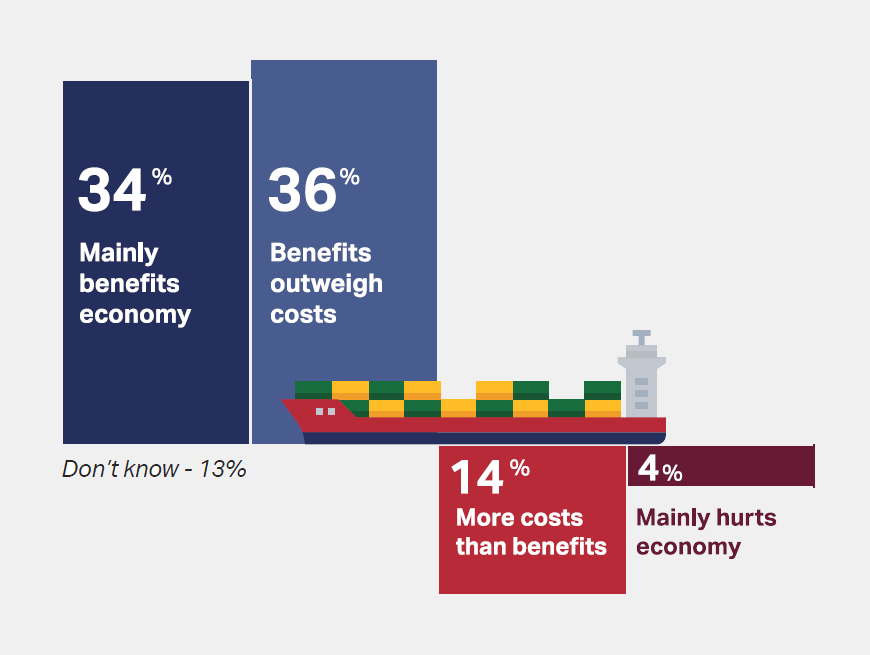 Trade was one of the main activities disrupted by the coronavirus pandemic. Broken supply chains, travel restrictions, and vaccine nationalism resulted in trade of services and merchandise dropping to the lowest levels in the past three decades. However, the majority of respondents in all eleven countries view international trade as rather or fully beneficial, particularly in Sweden (79%), Poland (78%), and the Netherlands (77%). Interestingly, the United States, the largest of the economies included in the survey, has, on average, lower favorable views of international trade (63%), including a country-wide high of 18% of respondents who are unsure. Of all countries, the French possess the least favorable views, as one third of them thinks that trade disadvantages their country (32%).

Upon deeper analysis, a particularly noticeable gender divide appears in most countries. Male respondents are more likely to find international trade beneficial than female respondents. Some of the largest disparities are visible in Sweden (88% of males vs. 71% of females, a 17-point difference) and Canada (81% of men vs. 65% of females, a 16-point difference). Similarly, across most countries, older respondents are more likely to indicate that they find trade beneficial than younger respondents, with the most striking difference appearing in the UK (85% of 65-year-andolder respondents vs. 59% of 18-24-year-olds, a 26-point difference), but this trend is also confirmed in Canada (78% vs. 70%), Germany (83% vs. 69%), Turkey (66% for the 55- year and older vs. 51%), and Poland (88% vs. 78%).

Political divisions are also evident, including in Turkey, (79% of AKP respondents vs. 56% of CHP respondents), the United States (73% of Democrats vs. 57% of Republicans), and Germany (86% of Green and SPD voters vs. only 55% of AfD voters). Furthermore, higher earners and more educated respondents are more likely to find international trade beneficial than lower earners and those of lower educational backgrounds. The most notable case is Italy, where 86% of highly educated and 74% of higher earners find international trade beneficial compared with 57% of respondents with lower educational backgrounds (a 27-point difference) and 58% of lower earners (a 16-point difference).

In France, where positive views of international trade are the lowest, a surprising reversal of the generational gap appears. Instead of older French respondents approving of trade over younger respondents, only 50% of respondents 65 and older find trade beneficial compared with 63% of respondents aged 25-39 years old. 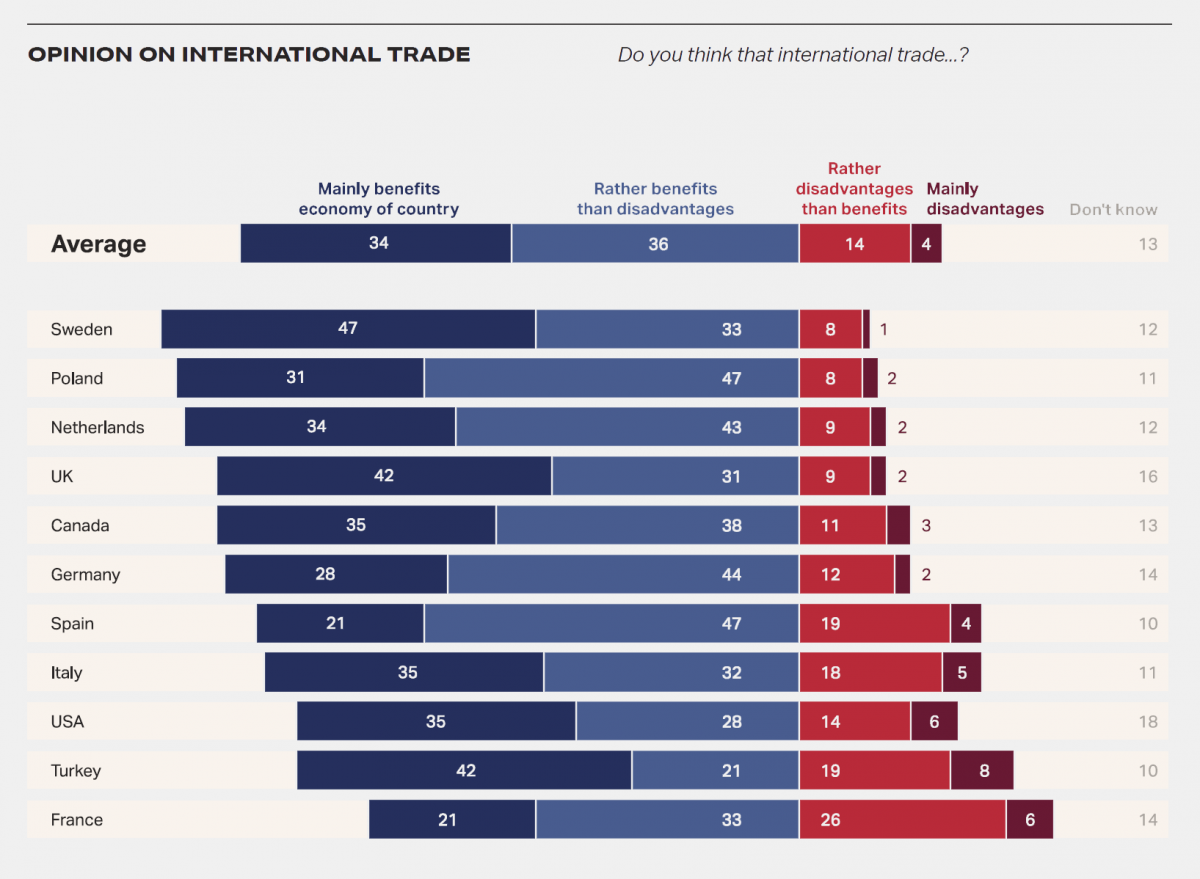 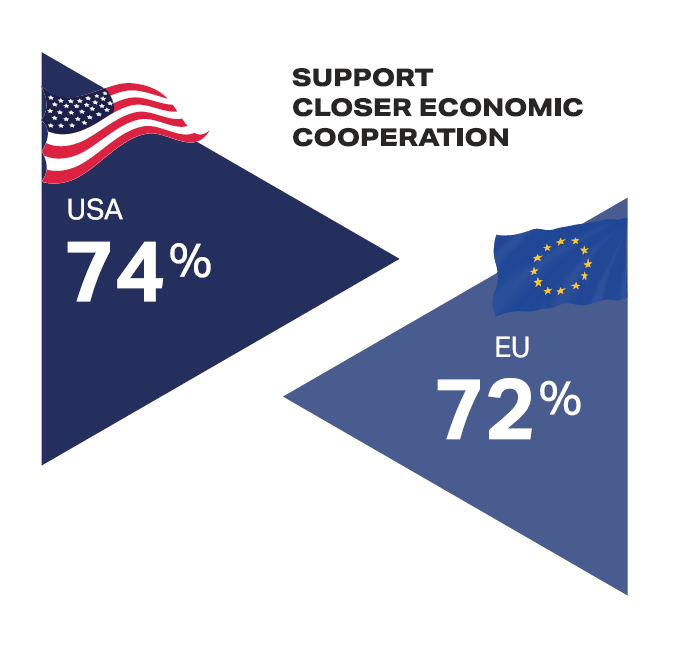 The United States and the European Union are each other’s largest trading partners, but the past few years have been dominated by trade tensions—even before the pandemic created new tensions. Despite German-American cooperation in creating one of the first vaccines, vaccine nationalism has subsequently dominated discussions over the challenges impacting transatlantic economic relations. However, it seems these trade tensions have not soured public interest in increased engagement. Calls for closer economic cooperation are overwhelmingly positive in all EU countries surveyed, as well as the two non-EU member states, Turkey and the United Kingdom. Furthermore, consistent with the 2020 survey results asking French, German, and American respondents how they felt about a transatlantic trade agreement, all parties are still in favor of closer economic cooperation, with the French supportive, but slightly less enthusiastic.

Of the countries surveyed, nearly three quarters of all respondents would like closer economic cooperation (72% average). The highest figures are seen in Spain (85%), Poland (80%), and Italy (75%). Country averages for overall support remain above 70%, except for Turkey (66%), and notably France (62%), where “I don’t know” answers are also highest (20%).

Similar to survey participants’ views of international trade, major divergences surface according to gender, age, education, income, and political affiliation. Older respondents are more likely to want closer transatlantic economic cooperation than younger respondents, with the most prominent gap surfacing in the UK (82% of 65-yearand- older respondents vs. 58% of 18-24-year-olds, a 26-point difference). More educated respondents view transatlantic economic ties more favorably than the less educated, as seen in the U.S. (85% vs. 59%) and Italy (86% vs. 69%). Respondents with higher incomes support closer economic cooperation between the U.S. and Europe more than those of lower earners, with the most striking gap surfacing in France (81% vs. 57%). The most prominent gender differences appear in Sweden, where 76% of males have favorable views versus less than a majority of females (48%), a 28-point difference. Similar divides surface in the U.S., UK, Germany, and Italy. Political divides also surface, as seen in the U.S., where 83% of Democrats support closer economic ties with Europe versus 70% of Republicans. 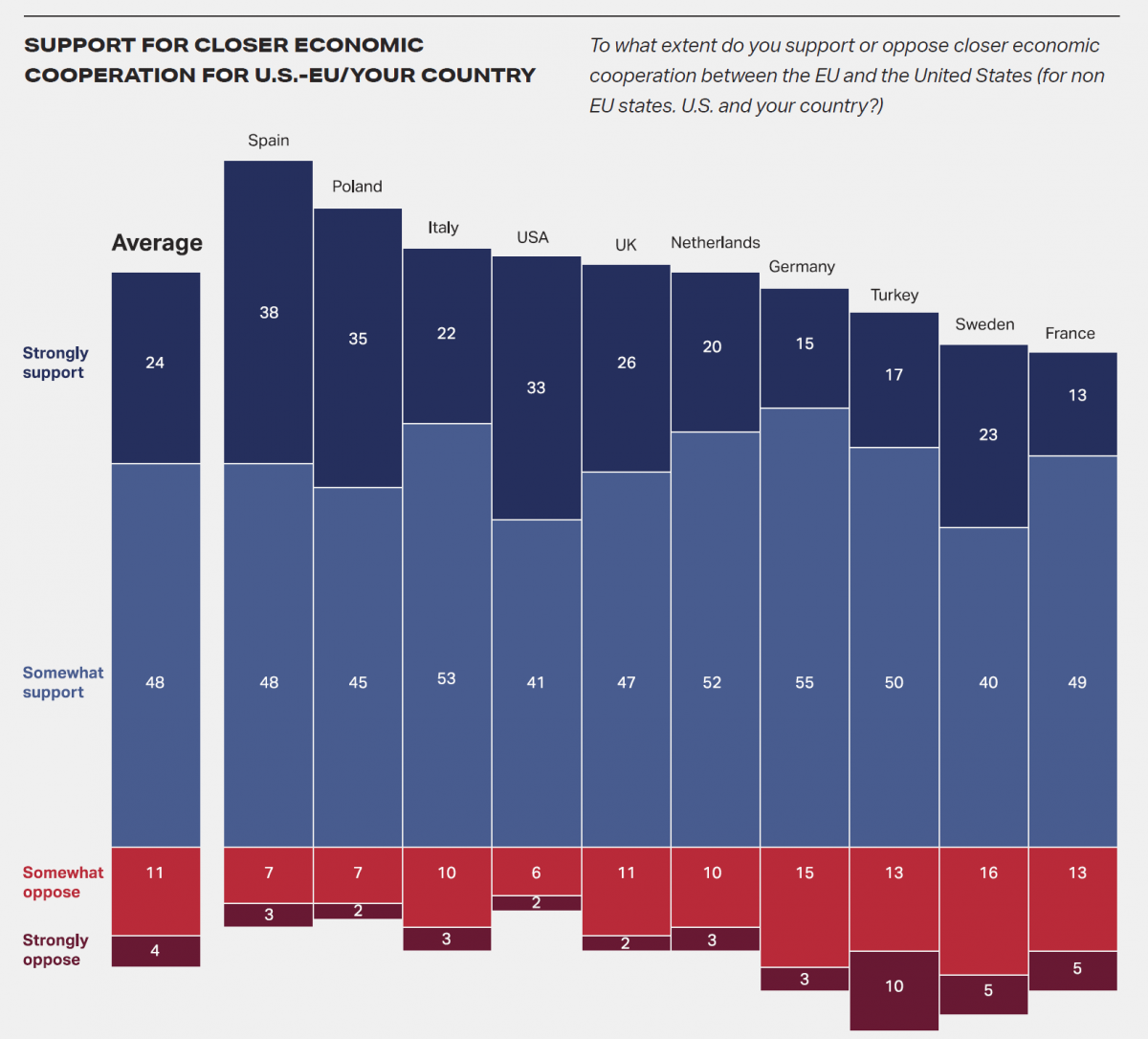 IS YOUR COUNTRY KEEPING PACE WITH TECHNOLOGICAL DEVELOPMENTS AND INNOVATIONS?

A plurality of respondents in nine of 11 countries are somewhat confident that their country is keeping pace with technological developments. Germans and Italians, however, are almost split on the issue, but lean slightly toward a pessimistic view. 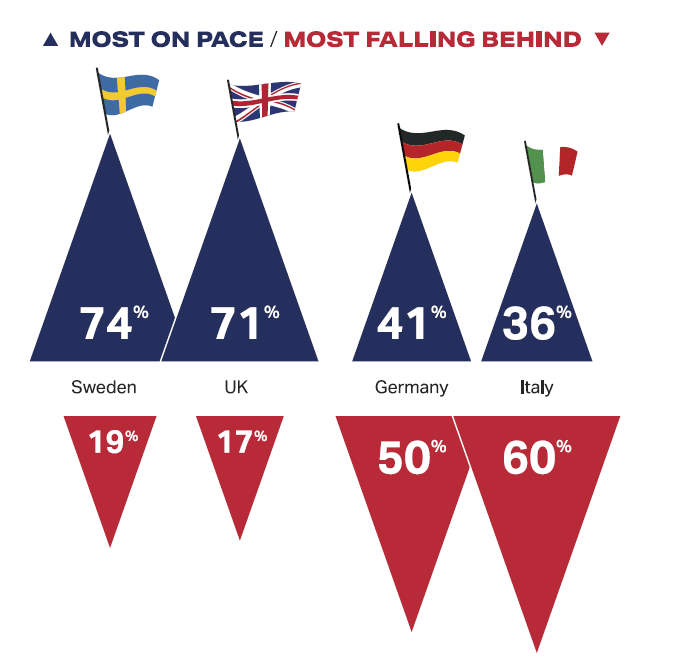 The coronavirus pandemic has forced governments, businesses, schools, and individuals to quickly transition to a much more virtual world. In the challenge to adapt, most respondents believe their country is tackling technological developments and innovations somewhat well, while over a quarter of respondents in the United States, Turkey, and Sweden give their country highest marks. Conversely, the majority of German and Italian respondents are displeased with their respective countries’ performances. Consistent with the 2020 survey, which asked Germans to rate the degree to which their government was helping citizens adapt to the impact of digital technologies in the workplace, Germans remain largely unsatisfied. Views in other corners of Europe are nearly split down the middle.

Across all countries surveyed, on average 58% believe they are keeping pace. The highest positive views are in Sweden (74%), the United Kingdom (71%), and the United States (69%). Two-thirds of Dutch, Canadians, and Turks also appear largely satisfied. The lowest estimations of tech capacity are in Germany and Italy, where 50% and 60% think their country is falling behind. The French, Spaniards, and Poles appear to be nearly split on the matter, with a slight majority in all three cases at least somewhat confident that they are keeping pace (47% vs. 44% in France, 52% vs. 46% in Spain, 47% vs. 45% in Poland).

In many countries, a generational and socioeconomic divide can be seen. In the United States and the UK, older respondents are more satisfied with their country’s tech pace than the youngest respondents in both countries (72% of 55+ in the U.S. and 80% of 65+ in the UK vs. 61% and 56% of respondents under 25, respectively). However, in Germany, older respondents are less satisfied than younger respondents, specifically 49% of Germans 65 and older think their country is lagging, compared with just 32% of 18-24-year-olds. Among Americans, the gap between socioeconomic status is particularly wide, with 86% of middle-upper class respondents indicating approval versus 57% of the lowest earners, a 29-point difference. In France, respondents in the highest income group are most confident that France is keeping up—14%, almost three times as high as the French average answering “yes” at 5%.

There are major political differences in Turkey, Italy, and Canada regarding tech confidence. In Turkey, 84% of AKP voters think that their country is keeping pace with technological developments, compared with 49% of CHP voters, a 35-point difference. In Italy, 67% of Lega voters are satisfied vs. 28% of Five Star voters, a 39-point difference; and in Canada, 81% of Liberal voters are satisfied while 59% of Conservative voters think Canada is not keeping up. 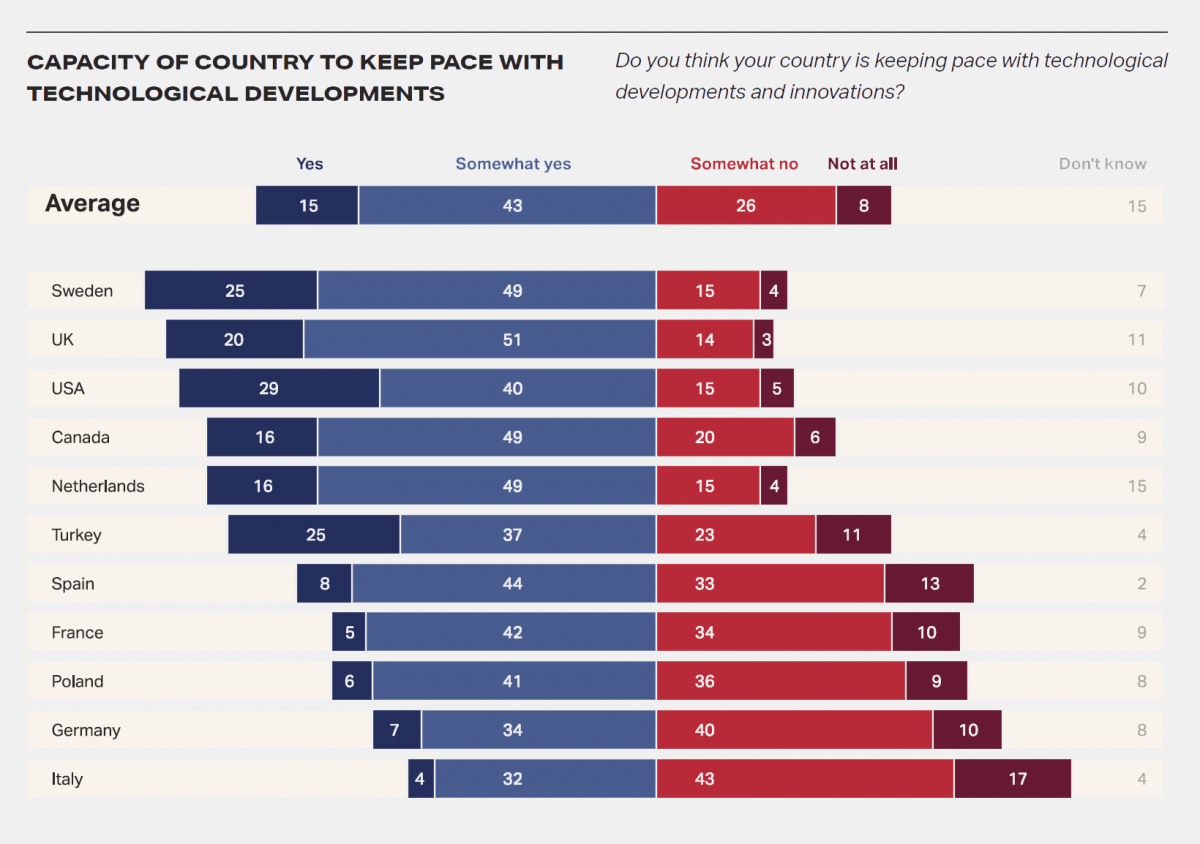