The Prospects for Quad-South Korea Cooperation on Critical Minerals

Used across the clean-energy ecosystem, they will be critical to enabling the transition to net-zero energy systems. But the global value chains that supply critical minerals are highly insecure. In recent years, the four countries of the Quadrilateral Security Dialogue (Quad)—Australia, India, Japan, and the United States—have taken the global lead in developing new critical-minerals industries through their national and collective responses. South Korea would make an ideal “Quad Plus” partner for these efforts, given its complementary technological capabilities and trusted political relationships with the four countries. Critical minerals also offer an attractive starting platform for beginning South Korea’s engagement with the Quad, upon which further economic collaboration could be built.

Critical minerals comprise around 30 commodities—such as lithium, cobalt, and rare earths—that are essential components in high-technology products. While present across the industrial ecosystem, they are especially important for clean-energy technologies. Renewable energy, electric vehicles, and grid-scale battery storage all require inputs of critical minerals. As the transition toward decarbonized energy systems gathers pace, demand for these will soar—for example, battery demand will increase tenfold over the next decade. Without a stable, secure, and rapidly expanding supply of critical minerals, there can be no renewable-energy transition.

However, the global value chains that supply critical minerals are highly insecure. At several points, near-monopolies present chokepoints where supply could be interrupted. This occurs at the upstream (extraction) stage where a single country typically controls half or more of the global supply of most critical minerals (Figure 1). It also occurs in the midstream (processing) stage of several critical-minerals value chains. This is illustrated by the global battery industry, where despite supplier diversity at the upstream and downstream stages, China has a powerful near-monopoly over the processing of battery components (Figure 2). 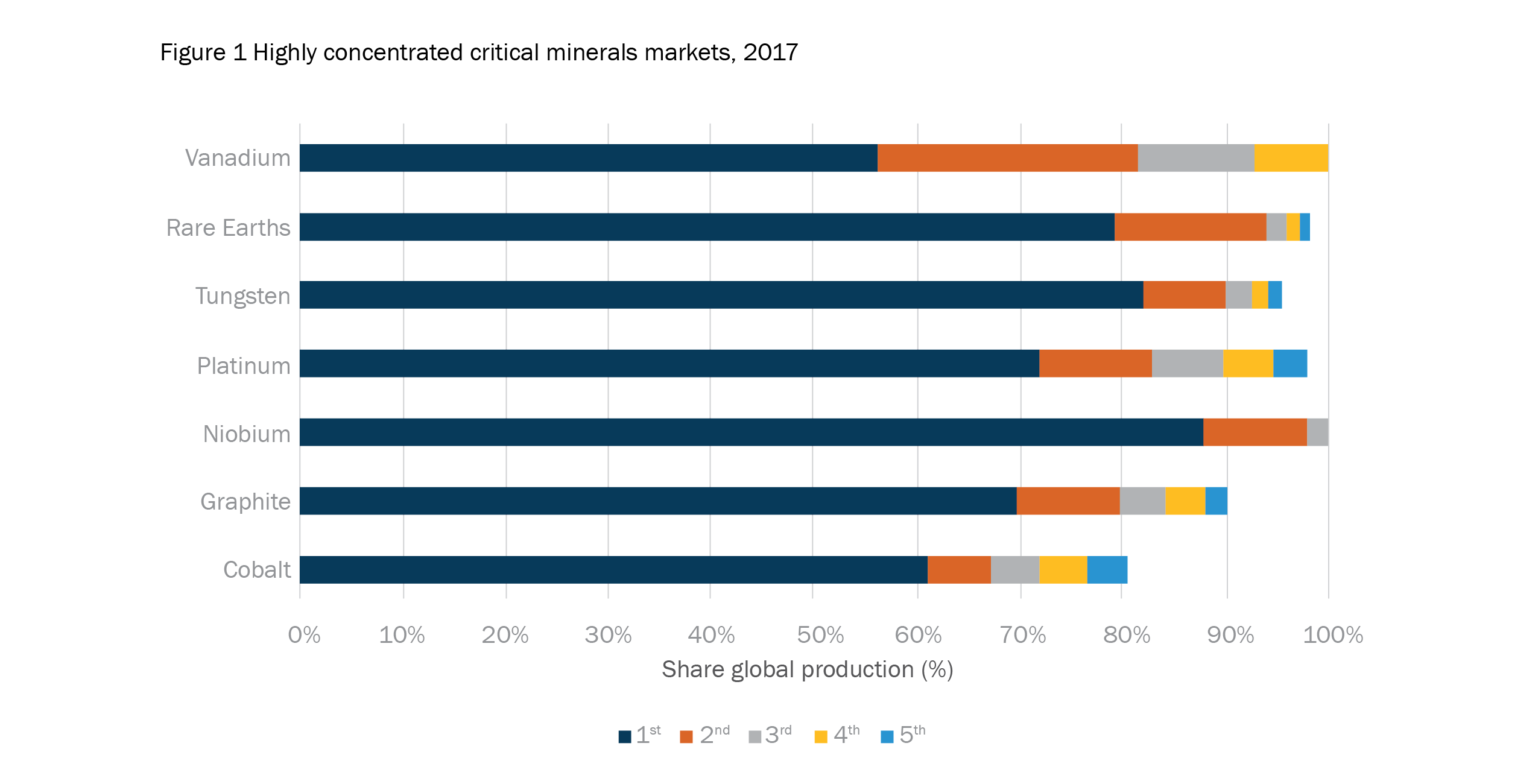 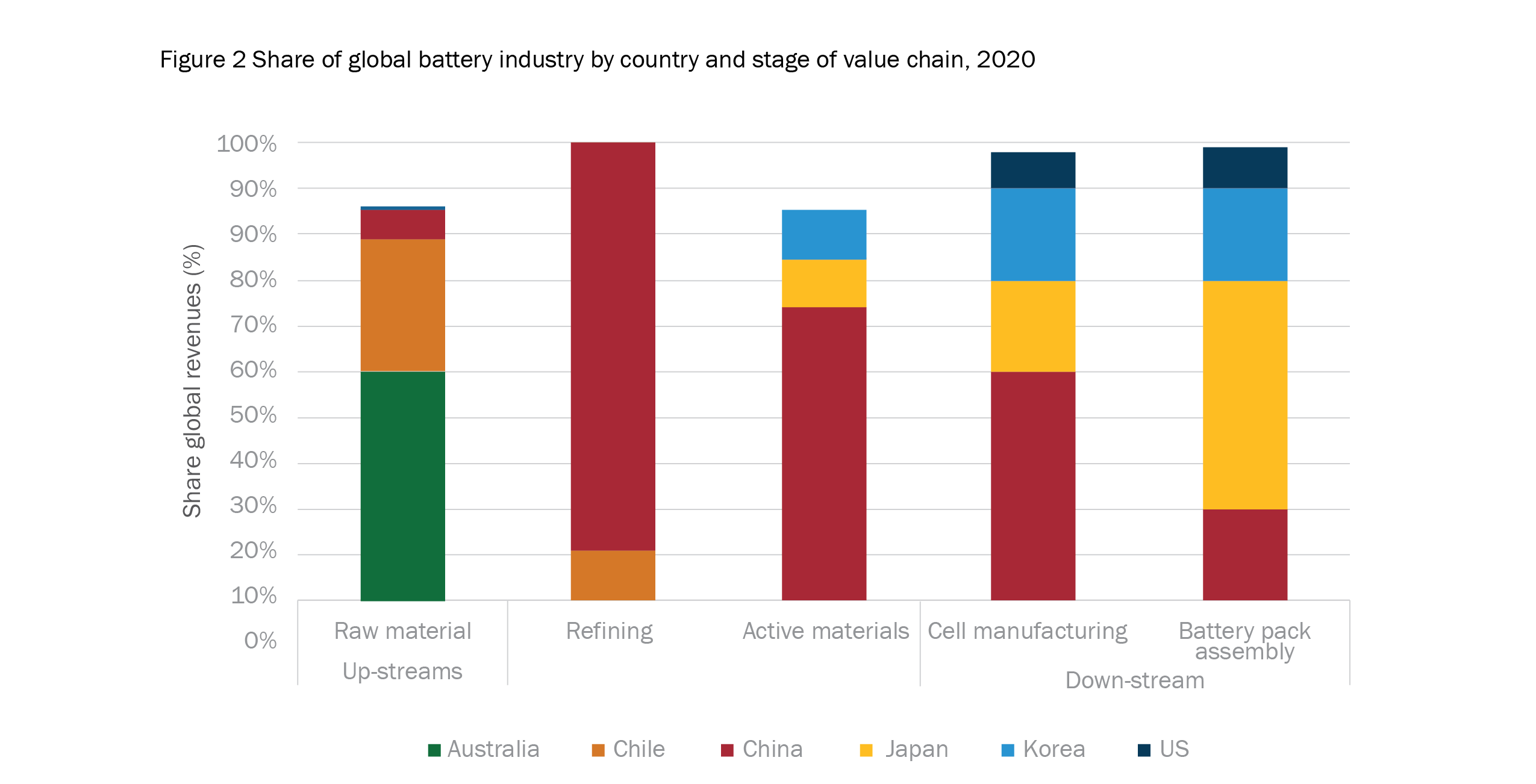 China’s control of several critical-minerals chokepoints is a particular concern. Its deteriorating political relationships with many countries and its ongoing use of coercive trade practices as a diplomatic tool raise the prospect that it could weaponize its critical-minerals market power. In 2010, China suspended supplies of rare earths to Japan as retaliation during a diplomatic dispute. Similar threats have been made to the United States regarding the supply of rare-earth magnets for defense supply chains. China’s willingness to deploy its market power for coercive purposes creates a geopolitical need for more diverse value chains for critical-minerals industries.

The Quad countries have recognized the need for new, more secure critical-minerals value chains. This reflects their shared interests in ensuring more secure supplies to support the clean-energy transition, their relevant industrial capabilities to play a greater role in the value chain, and their increasingly contested relationships with China. Since 2019, all four governments have had in place national policies to develop new critical-minerals industries.

There are also clear complementarities between their capabilities. Australia is the world’s leading upstream critical minerals producer, and it has ambitions to move into the midstream processing space. India has the low-cost manufacturing capacity required for success at the downstream end, particularly in batteries and photovoltaics. Japan and the United States have significant technological and financial resources to develop new value chains and they will be key markets for current and emerging clean-energy products. There is ample commercial scope to combine these complementary assets into new and more diverse critical mineral value chains within the Quad.

Formal cooperation in critical minerals has recently begun among the four countries. Australia has signed cooperation agreements with the United States (2019) and India (2020). The Australia-Japan free-trade agreement of 2015 contains a resource-cooperation platform. The Supply Chain Resilience Initiative, launched by Australia, India, and Japan in April 2021, aims to build new value chains in critical minerals. At the Quad level, the establishment of a supply-chain resilience working group following the March 2021 leaders’ summit also provides a venue for collaboration on critical-minerals security. These mechanisms provide a platform for the four countries to align their national critical-minerals strategies and develop “within Quad” value chains that exploit synergies between their respective capabilities.

A Quad Plus Partner in Critical Minerals

South Korea would make an ideal partner for the Quad’s efforts in this field. Like the four countries, in 2020 it recognized the security risks facing the supply of critical minerals and put in place policies to build new international partnerships. The country also brings synergistic industrial capabilities to the table in the form of world-leading capacity in electric vehicles, battery production, and chemicals processing. Both sides can potentially benefit from cooperation on critical minerals. South Korea would benefit from increased supply security for its industries using critical minerals, particularly its burgeoning electric-vehicles sector. The Quad would benefit from an infusion of technical capabilities from South Korea as well as from a broader range of potential commercial partners among the country’s investors and customers.

In the near term, bilateral instruments provide the best way for South Korea to build partnerships with the Quad. Engagement should start with bilateral cooperation agreements, using Australia’s instruments as a template. Australia and South Korea signed an agreement on critical-minerals cooperation in December 2021, and similar instruments could be developed with the other Quad partners. This will enable South Korea’s policies to be aligned with those of the Quad countries and open the door for commercial developments involving their companies. Such bilateral agreements carry the additional benefit of being faster to negotiate and to activate than a Quad-level instrument. They also avoid the geopolitical concerns that South Korea’s immediate participation in a formal Quad Plus format would bring.

In the medium term, however, critical minerals will also provide a useful domain for engaging South Korea in Quad Plus formats. As the country must balance competing strategic imperatives in engaging with the Quad, it is most likely to join mechanisms that focus on less sensitive issues and provide direct, tangible benefits. Alongside cybersecurity and climate change, critical minerals constitute one of the most attractive of the Quad agendas for South Korea to participate in. It offers a low-controversy form of functional cooperation that would build trust and comfort with participation in Quad activities. Critical minerals can thus provide an appropriate vehicle for South Korea to begin Quad Plus engagement and can potentially pave the way for engagement on other substantive issues in future years.

Jeffrey Wilson is the research director at the Perth USAsia Centre.

This article is part of a project on Exploring the “Quad Plus” Framework: Quad Plus South Korea Partnership, conducted by the Asia Program at The German Marshall Fund of the United States with support from the Korea Foundation. GMF’s Quad Plus in Europe and Asia research explores opportunities for cooperation between the Quad countries and like-minded partners in Europe and Asia in areas such as technology, supply chains, infrastructure investment, climate change, health, and security.