Skip to main content
Join us from June 27-29 for the 17th annual Brussels Forum!
Register Here
of
Insights
Blog Post

GMF’s founding chairman, Guido Goldman, passed away on November 30. GMF’s board and staff offer remembrances of a remarkable and consequential life.

Guido Goldman was a rare man. He was a visionary about the future of America and Europe and also an intensely practical observer of real life in the transatlantic relationship. He was an intellectual who ran a great research center at Harvard and also a community builder who could raise money and provide leadership for Alvin Ailey and other organizations he loved. The German Marshall Fund was especially blessed by his guiding hand. The organization was his creation—quite literally. It wouldn’t have existed without his timely intervention with the German government. Through his chairmanship of GMF over the years he used the initial German gift to build an organization of global impact and renown. As a longtime GMF trustee, I know that Guido’s living memorial is all around us, and that we all strive to live up to the example he set.

David Ignatius is a trustee of the German Marshall Fund, an author, and a columnist for the Washington Post.

He Created an Atmosphere of Listening 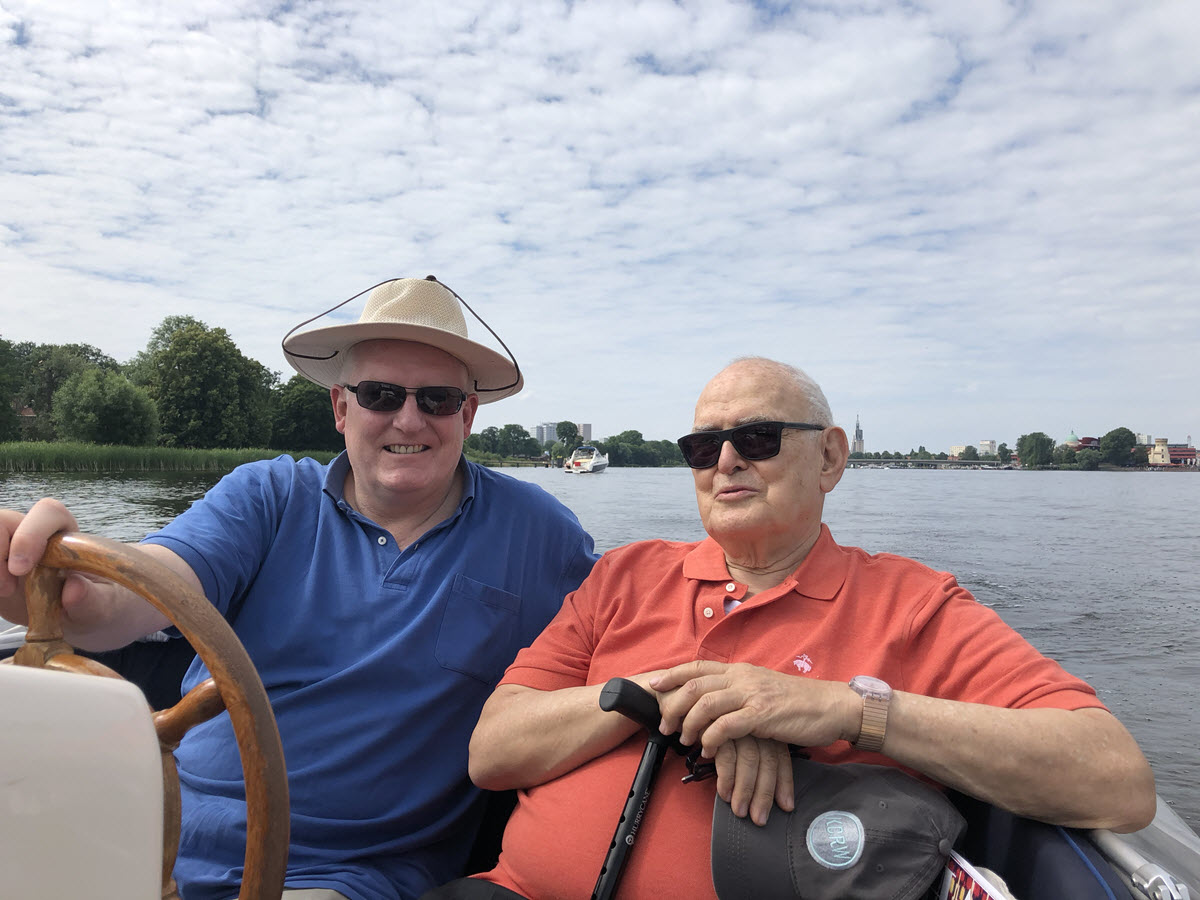 Two years ago in June, Guido visited Germany as he has done for many years. Guido was always eager to discover something new. So I invited him to Potsdam, the residence town of the Prussian kings, a place full of castles and parks that sits on a green, lush peninsula. To make it easier for Guido, we rented a motorboat and invited a guide along. During this outing Guido was probably as happy as I have seen him in many years. He took in stories about enlightenment Prussia, the English gardens, the lakes, but also Prussian militarism, the Potsdam Conference, and Soviet occupation. It was a trip that took Guido to the heights of German culture and its dark sides, all at once, within a few short hours and as part of a delightful boat trip. The tour ended at the Bridge of Spies where Soviets and Americans exchanged personnel during Soviet occupation. Guido immediately committed to come back. It was not to be.

In public settings Guido did his best not to be at the center of attention. To be sure, he wanted to be part of a good, meaningful conversation. But he wanted to be the enabler. He wanted others to shine. He would ask the one question that would allow the speaker to expand on something he was interested in and knowledgeable about. I remember a meeting with Guido’s old friend Henry Kissinger and a dozen of Guido’s guests, just a couple of years ago. People usually have many questions for Dr. Kissinger. But it was Guido who steered the conversation into unexpected territory. He asked Kissinger about AI, Artificial Intelligence. Kissinger lit up and talked for minutes. Who would have known that Kissinger had taken an interest in AI? Well, Guido knew, and he wanted to put his old friend in a position to impress the group in new ways. He certainly succeeded and later we all talked about the curiosity of a man deep in his 90s.

One of Guido’s favorite pastimes was going out to eat, and eat well. He would connect with people over food. He literally held court in restaurants. I remember a trip to Miami where he had a home. We would go out to eat at night, and I can think of no better way of exploring Miami than being taken on a culinary tour by Guido Goldman. The geography of the place was to be deciphered by way of its food landscape. It was Guido’s very special way of having you connect with a place. I have also seen him do this in New York, Washington, Concord (Mass.) and Berlin. Yes, even Berlin, my own town. But he would show me a side of town that I did not know yet. Guido spent a lot of time picking the right places. And he was not satisfied easily. His dinner invitations were always special because he made them so. There was a certain aura. He created an atmosphere of listening. He took care of his guests. Always.

Guido Goldman was deeply committed to strengthening the German-American partnership, and I feel fortunate to have known him and seen him in action on both sides of the Atlantic. He had a hand in so many institutions that are today the building blocks for furthering transatlantic ties, but over the last decade I also learned about his other life projects. I only realized the scale of his dedication to the Alvin Ailey American Dance Theatre and colorful ikat textiles when meeting Ailey dancers, including the legendary Judith Jamison, during a celebration for an opening of Guido’s astounding ikat collection at the Sackler Gallery.

Guido was a living piece of history who had come into contact with many decisionmakers, including Konrad Adenauer! But during his frequent visits to Berlin, he made sure to meet with young policymakers to hear their views on current German politics. It was a pleasure and honor to accompany him during these meetings and to work with him on GMF’s 40th and 45th anniversary programs in Berlin. Beyond the officialdom, I will always remember him fondly when I see the smoked salmon on Café Einstein’s menu and pass by the Pullman Hotel near the Berlin Zoo.

It is fitting that I have memories of Guido on the other side of the Atlantic as well. I was surprised to hear that he had never visited Hyde Park in NY, close to where I grew up. So, one hot summer day, my family and I met with Guido to visit the home of FDR there, one of Guido’s favorite U.S. presidents. He took his time, but definitely walked enough to surpass his daily goal of a couple of thousand steps. Shortly afterward, I was happy to celebrate Guido’s last runder Geburtstag with him. I wish we could have another one and mark GMF’s 50th anniversary along the way, but he will be with us in spirit when we get there. He will continue to be an inspiration, motivator, and dear person in my life. Rest in peace Guido.

A Life Full of Purpose

I consider one of the great privileges as part of GMF’s network has been the opportunity to get to know our founder, Dr. Guido Goldman. I always appreciated his kindness, sense of humor, and boundless curiosity on a wide range of subjects. It was clear that Guido was a man who made a commitment to live a life full of purpose—tirelessly advocating for the transatlantic relationship, the arts, and access to education and healthcare to name but a few issues.

Most importantly, Guido showed us how leadership is ultimately about a passion, not a position. He lived the embodiment of an individual’s agency to influence positive change in the world. What made Guido exceptional was his delight and generosity in nurturing this very same capacity in the others he encountered throughout his life.

A Legacy of Generosity and Inspiration

After my joining the German Marshall Fund in 1980 as director of the European office in Bonn, it was a pleasure to welcome Guido for a first visit. Guido was the architect of the German Marshall Fund and having his blessing on the office was important. After a while he asked me if he could borrow my office for a while as he had some calls to make. He pulled out a list of over 100 people and emerged from my office three hours later. Over the five years I worked in Bonn, watching Guido connect with people was a masterclass in nourishing relations. He always looked for a common thread with those he met in the many circles he encountered. He would clearly remember each of them and what was discussed. He simply enjoyed connecting. And in many ways the German Marshall Fund has embodied his passion.

Guido’s pride in having created the German Marshall Fund was palpable but he also respected and supported other organizations devoted to German American affairs including the American Institute for Contemporary German Studies in Washington since its inception in 1983. That was also my chance to continue connections with Guido after I joined the Institute in 1989. As my professional life would be shaped around the German-American relationships he knew so well, his guidance and friendship were invaluable. I once told Guido that I might be able to identify with his pride in GMF through the pride I felt in AICGS. He told me something I never forgot—to feel that pride is the best reward you can have in anything you do and even more when you can share it generously with everyone you meet.

Guido left us with the inspiration of his generosity, his passion for connecting people and ideas, and his life-long devotion to the bonds of the transatlantic community. So many of us are indebted to Guido for so much—and we can best remember him by walking in his footsteps.