On January 6, a mob stormed the Capitol over false claims of voter fraud. Those false claims spread widely on social media: Facebook and Twitter have been inundated with such claims since the election. The level of engagement with deceptive content on Twitter and Facebook hit record highs in 2020 and remained high in the fourth quarter of the year, as false and manipulative content about the election and the coronavirus spread widely.

We analyze data from NewsWhip, a social media intelligence firm. For Facebook, we measure interactions (likes, comments, and shares) on posts that include links to deceptive sites. For Twitter, we analyze shares (tweets and retweets) by verified accounts (that is, “blue check-marks”) of links to deceptive sites. These metrics do not always correlate with prevalence, as platforms can limit the visibility of deceptive content. However, interactions and shares are the best available metrics to analyze engagement on Facebook and Twitter, respectively.

Even in a quarter that saw declines across the board, some False Content Producers saw significant gains on Facebook. Interactions with content from Newsmax increased twelvefold from the third quarter to the fourth quarter of 2020, from 1.3 million to 15.4 million, and OANN’s interactions rose from 942,000 to 2.8 million in the same period.

Facebook and Twitter took measures to reduce the spread of disinformation and support reliable information around the election. Facebook altered its news feed algorithm to boost mainstream news outlets following the election and adjusted its user interface to slow the spread of election-related content. Twitter also implemented changes to its user interface, creating additional steps for users to take before sharing content. These changes entailed encouraging users to read articles before sharing them, prompting users to add a comment to their retweets (known as a quote tweet), and disabling likes, replies, and retweets without comments on nearly 500 tweets containing misleading information.

Our research suggests that the changes the platforms made around the election boosted reputable outlets and may have reduced the spread of deceptive content. Twitter reported a 20 percent decrease in retweets and quote tweets while its measures were in place, which slowed the spread of disinformation along with all other content. The decrease in verified account link shares during this period was less extreme than the overall reduction in shares. When Twitter rolled back some of its measures on November 11 there was a sudden increase in verified account shares of articles from False Content Producers, indicating that while the measures were in place they suppressed some sharing of content from deceptive sites. On Facebook, interactions with our sample of 106 outlets rated as credible and transparent by NewsGuard peaked in the weeks following the election, when the algorithmic changes were in place. This suggests that the algorithmic changes succeeded in pushing more content from reputable outlets into users’ news feeds.

Shares of content from deceptive sites by verified accounts on Twitter reached an all-time high in the fourth quarter of 2020, at 47 million. False Content Producers accounted for 36 percent of those shares. This is a higher fraction than in all but two previous quarters. 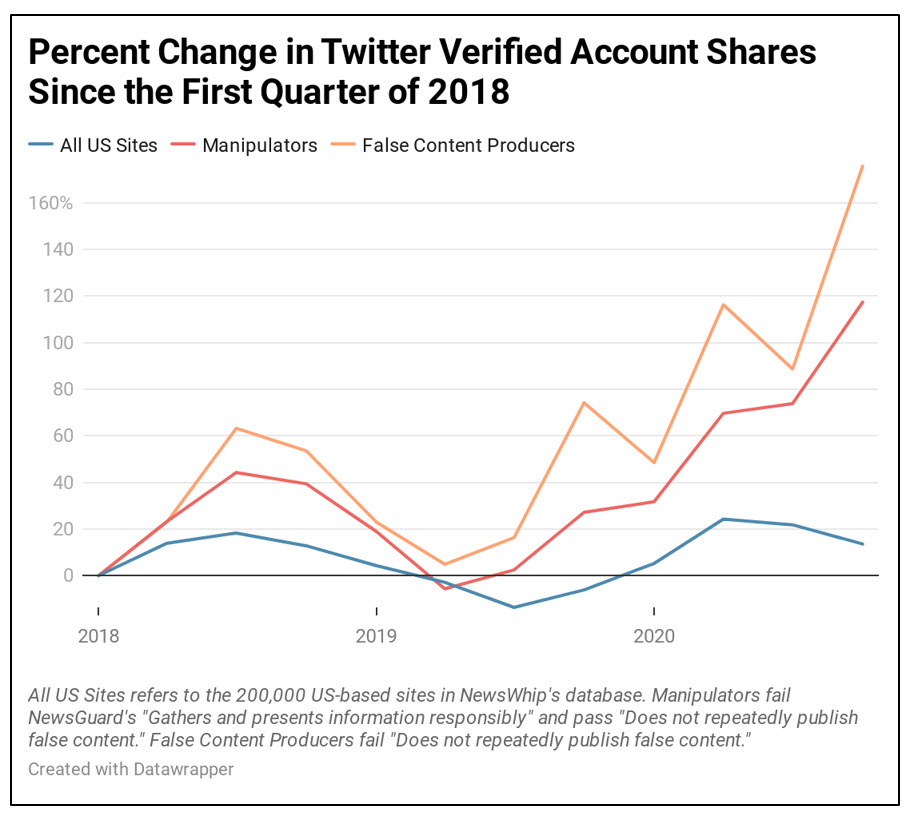 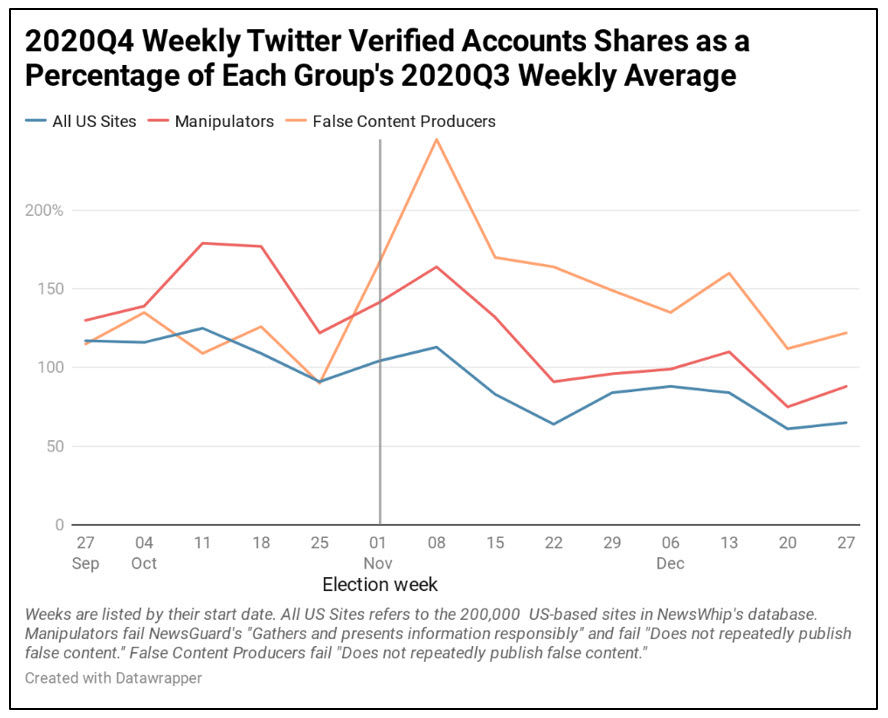 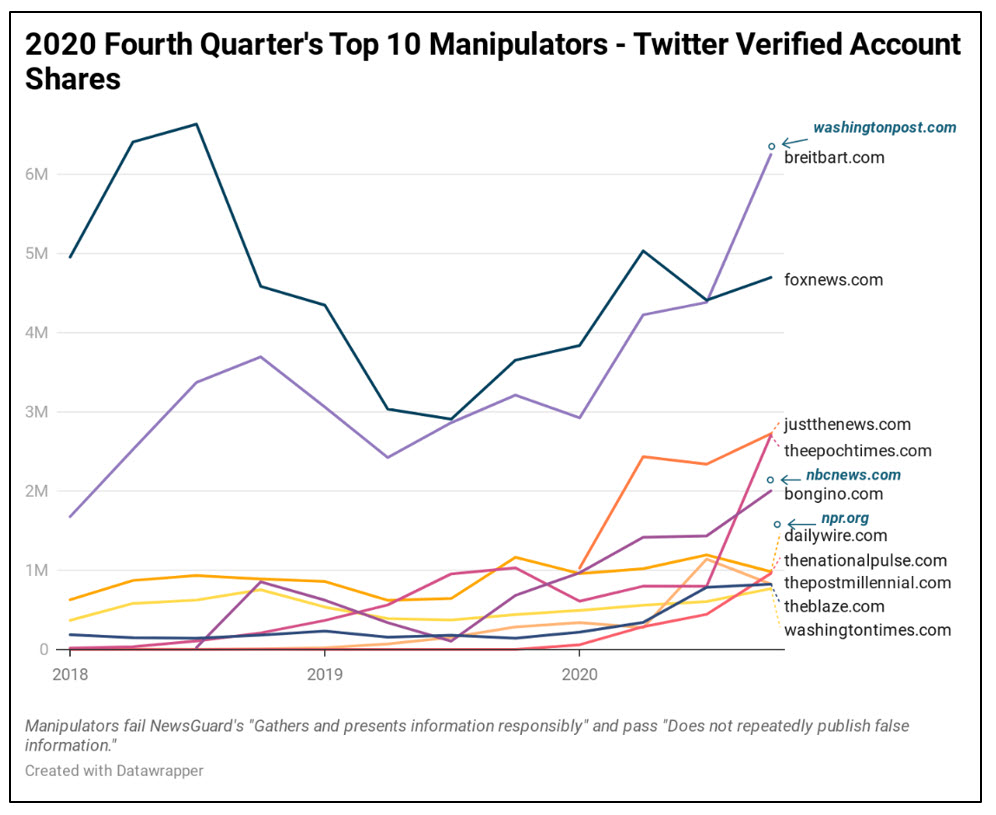 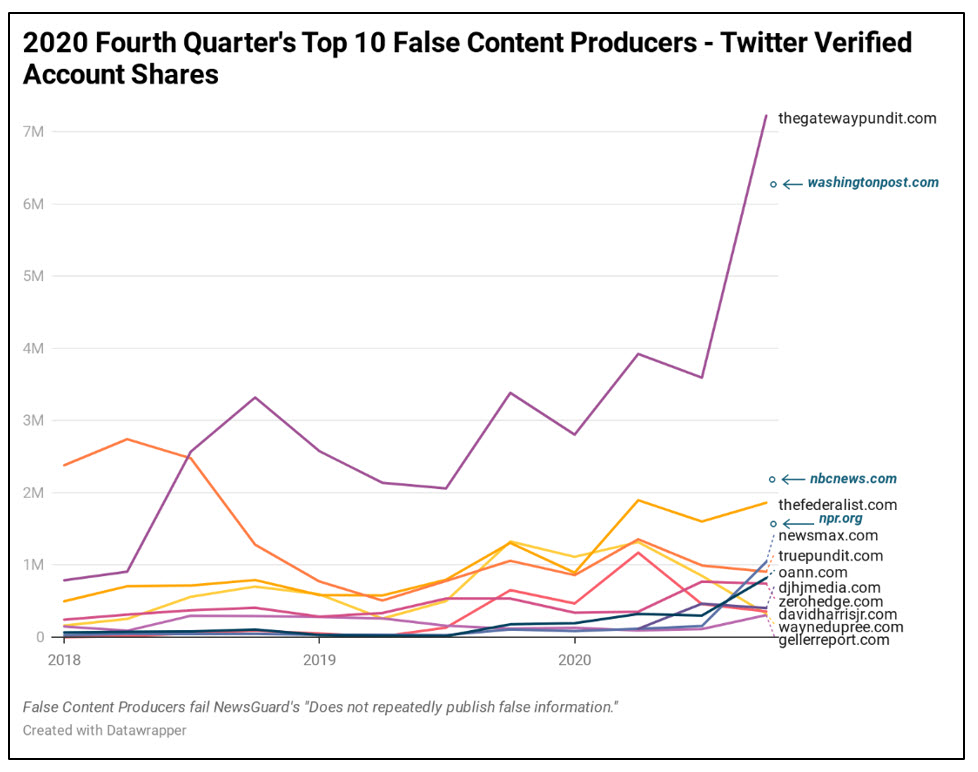 There is some question as to whether the increase in verified account shares of articles from deceptive sites may be driven by an increase in the number of deceptive sites or an increase in the volume of content produced by such sites. While some of the sites in our data set did not exist in the first quarter of 2018, most of the top-producing sites did. And, while the overall volume of deceptive content has increased, our research revealed an uptick in the number of verified account shares per article. 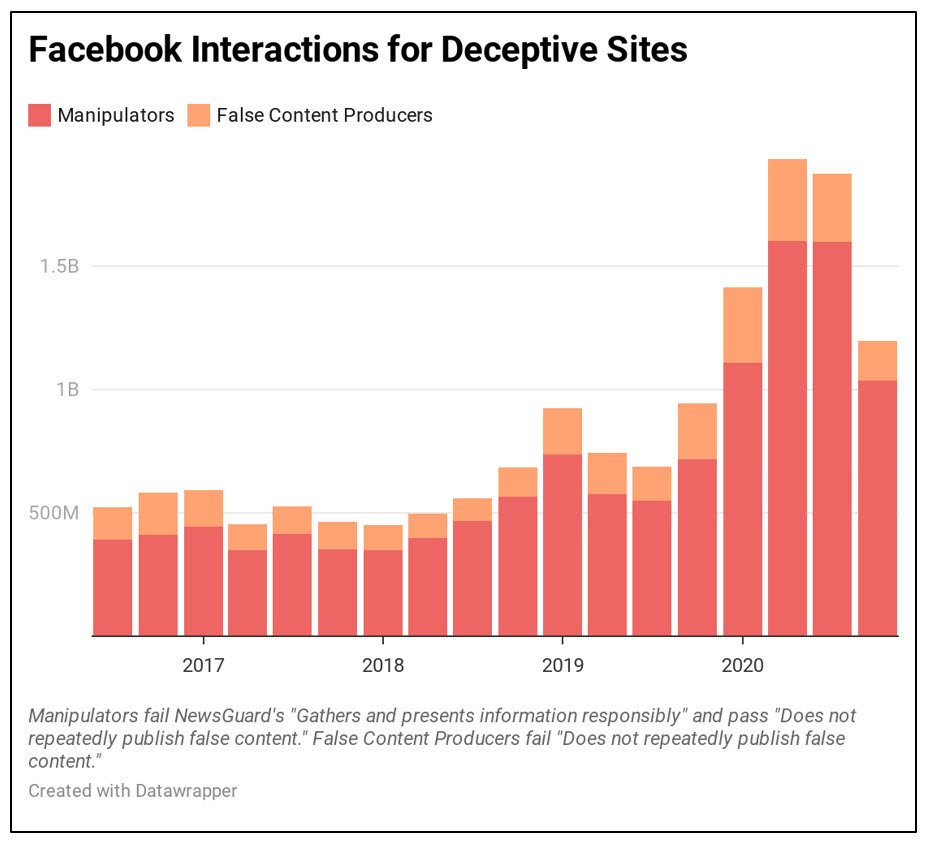 Interactions with deceptive sites on Facebook remained more than twice as high as in the run-up to the 2016 election. Most of those interactions—87 percent—were with Manipulators. And while the fourth quarter of 2020 saw a decline in Facebook interactions with all types of U.S.-based websites, the growth rate of Manipulators since the third quarter of 2016 remained higher than that of U.S. sites in general. 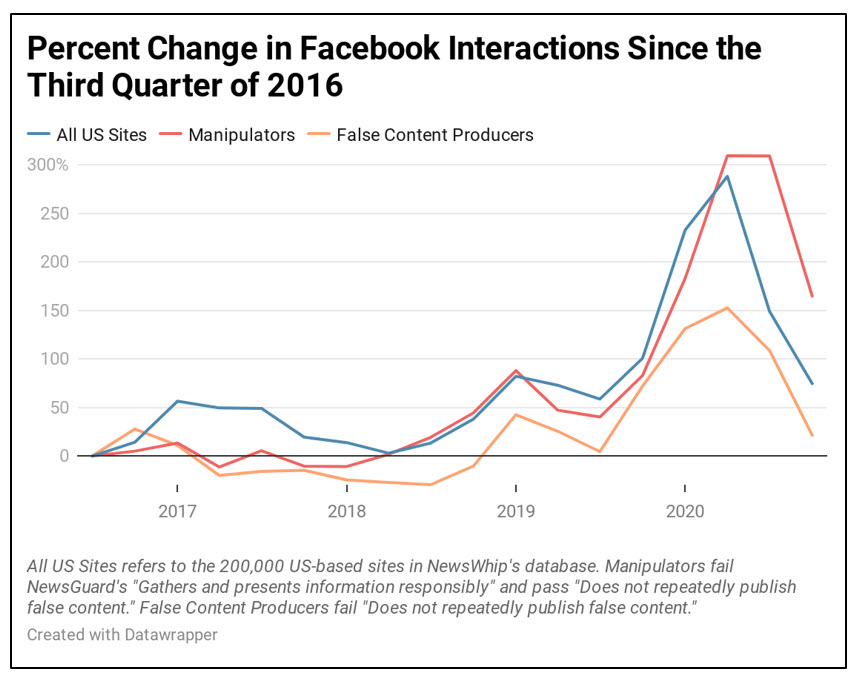 Manipulators have grown their interactions 165 percent since the third quarter of 2016, while all U.S.-based websites have grown theirs by 75 percent. False Content Producers have increased their interactions more slowly—by 21 percent since 2016. Combined, deceptive sites received 6.4 billion interactions in 2020—double that of any previous year. Although we cannot make direct qualitative comparisons between Facebook and Twitter because differences in the APIs prevent apples-to-apples comparison, 2020 was a record-setting year on both platforms. 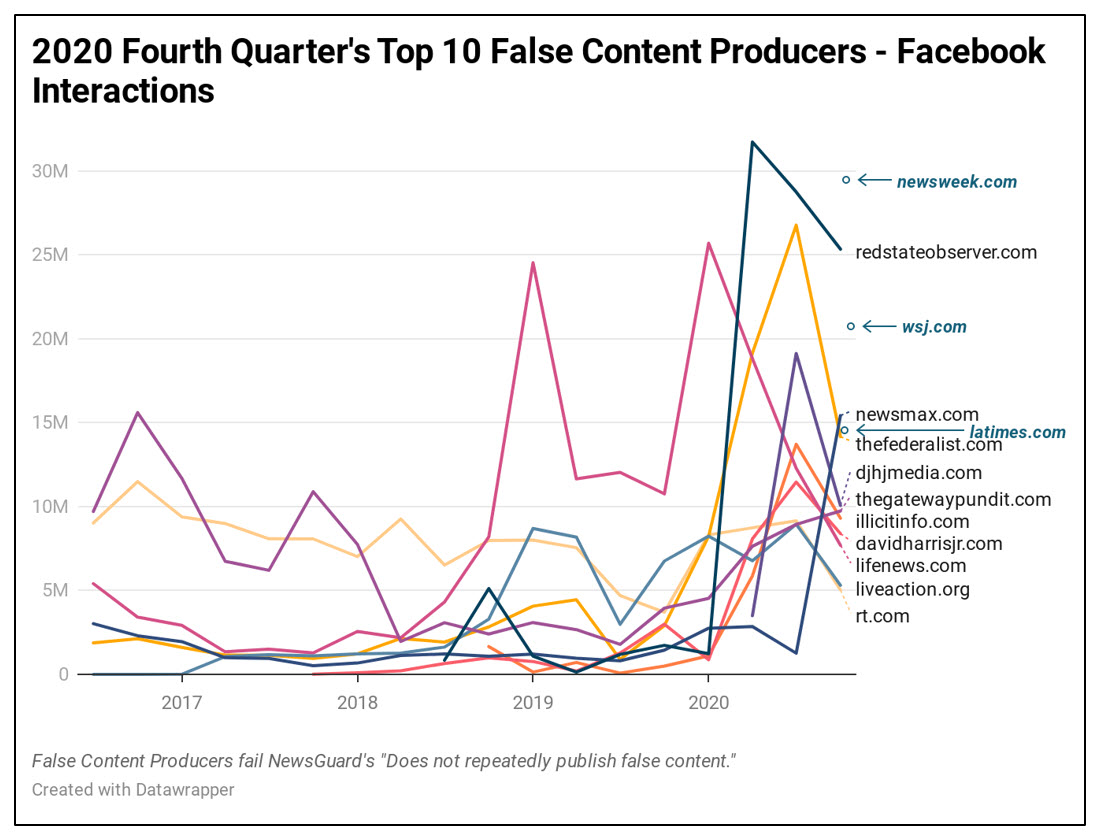 Despite the decline in interactions between the third quarter and fourth quarters of 2020, some False Content Producers increased their engagement on Facebook. Newsmax saw a significant rise in engagement and The Gateway Pundit had a small increase. The top False Content Producers have fewer interactions than the top reputable outlets—NBC News had 125 million interactions and The New York Times had 116 million—but similar numbers as Newsweek (29 million), The Wall Street Journal (21 million), and The Los Angeles Times (15 million). Many of the top-performing deceptive outlets are right-leaning, but there are left-leaning and apolitical sites within both categories.

The top-performing articles from deceptive outlets on Facebook were varied in their focus. Twenty-one of the top 100 articles were about the presidential campaign, while seventeen focused on claims of voter fraud after the election. Fifteen articles discussed the coronavirus, mostly in relation to Donald Trump’s diagnosis. For example, among the top articles on Facebook were:

[1] Our Twitter data starts in the first quarter of 2018 because NewsWhip changed how it collects Twitter data in November 2017.