German-American Dialogue on the Post-Soviet Space

Germany and the United States are facing similar, and still unresolved, challenges in the post-soviet space, such as the ongoing crisis in Ukraine or the growing political instability in the Republic of Moldova. The new project, German-American Dialogue on the Post-Soviet Space: Assessing the State of European Integration and Potential for Transatlantic Cooperation – the Case of Moldova, seeks to foster transatlantic dialogue on the post-Soviet space and is implemented by the Institut für Europäische Politik  in cooperation with The German Marshall Fund of the United States (GMF).

This project will review German policies and instruments in the framework of the European Neighbourhood Policy and the Eastern Partnership, and look at policies of the United States with respect to their capacity to support transformation processes in the post-Soviet space. It seeks to create synergies between German and U.S. approaches to the region and to identify the specific domestic obstacles to transformation within the countries of the post-Soviet space.

Representatives from the United States, Germany, other European countries, and target countries of the Eastern Partnership will meet for a series of four dialogue workshops to be held in Berlin and Washington, DC. The results of each dialogue workshop will be published within a review document.

The German-American Dialogue is funded by the Transatlantic Program of the Government of the Federal Republic of Germany. 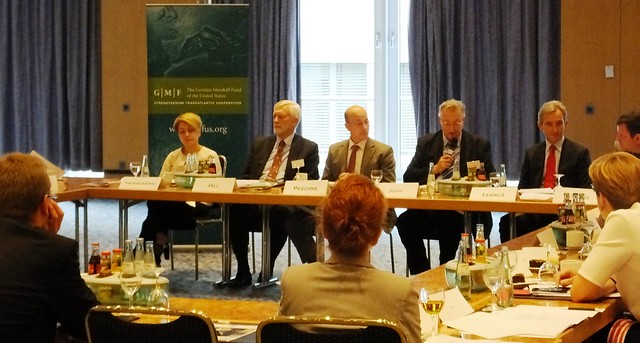